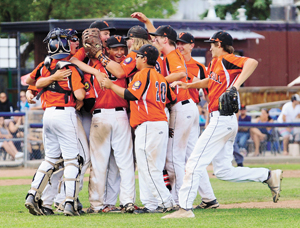 (File Photo) JUMPING FOR JOY: The Vauxhall Spurs will be looking to even bigger and better things than last year’s district title celebrations (pictured).

The Vauxhall Spurs baseball team will be looking to build on its district title from 2015, and it all starts with the warm up/tryout camps that start on March 9 at 5 p.m. at the Vauxhall Community Hall.

“I essentially call the camp a tryout. For the guys we had last year, it’s a warm up for some and a tryout for others more. Depending on where they stand, obviously if they are a Grade 12 kid who has been with me for the past few year sit will be more of a warm up,” said Joel Blake, head coach of the Vauxhall Spurs. “Everyone gets evaluated and no one should be comfortable with their position. I tell the kids every year it is a blank slate and every kid will be evaluated or re-evaluated. I’d say my optimum roster size would be the same as last year, around that 13 to 14 player range.”

It’s more the merrier for Blake in encouraging kids to come to tryouts where a nominal fee is attached.

“I even encourage younger kids in Grade 9 to come and try out. At the end of the day, even if you don’t make the team, yeah that sucks, but you are still getting the repetitions in which is important in baseball. It also gets them on our radar, where maybe they aren’t a fit this year, but it’s good to see for down the road.”

With less than a quarter of the Spurs team graduating from last year that has seen the Spurs win back-to-back District titles in American Legion ‘A’ baseball, whatever teams emerges from tryouts in March, Blake will have high expectations for.

Uneven play the past two years that have had the Spurs struggle to reach .500 during the regular season, only to go on a tear when districts rolls around will have Blake expecting more consistency this year.

“I’ve been excited for this year for quite some time now. I really have high hopes for our leadership crew this year, just because now I’m starting kids I’ve had from Grade 9 and 10 who are now our more senior players,” said Blake. “I do have expectations with them having a better leadership group this year. That’s very important, and I’ve felt we’ve lacked that the last couple of years with a solid leadership core. We are returning a lot of players and the vast majority of the team knows how I like things done playing as a team. I have confidence in the players that they have a good goal in mind and they won’t be satisfied with just district wins. Nor am I with being winless at State. I’m hoping to get at least one there.”

“Tryouts will be once or twice a week (after March 9) once I get my Academy schedule worked out for the first month. We will be in the gym depending on the weather. If it’s nice we will be outside whenever we can,” said Blake. “I just like to evaluate where I don’t say much the first couple of weeks. I sit back and watch and there will be some fun toss, hitting off the tee. And if we can get outside we will be taking ground balls and fly balls.”