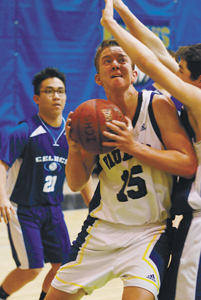 (Photo by Greg Price) INSIDE PRESENCE: Alex van der Stoel of the Vauxhall Vikings boys basketball team looks for a second-chance basket against the St. Mary’s Celtics after hauling in an offensive rebound at 2A South Zone competition at Lethbridge College last week.

In the bronze-medal game, the Vikings fell to Immanuel Christian Eagles 66-45 on Saturday.

Down five players due to injury and/or baseball commitments, the Eagles swooped in with plenty of pressure on the Vikings and its short bench.

“There was too much ball pressure for us. Without our starting point guard we just couldn’t handle their pressure,” said Daryl Johnson, head coach of the Vauxhall Vikings boys basketball team.

“They jumped out early on us with a 15 to 20 point spread, and then it stayed that way the whole game. We finally got things figured out and got things going, but by that time they just held the lead.”

Alex van der Stoel led the Vikings with 16 points. Erik Anderson had 10 points and Kevin Turner chipped in with nine.

Earlier, the Vikings were pushed to the bronze-medal game with a lopsided 82-43 loss to Kate Andrews Pride on Friday.

“With the group that I had and the effort we got I was pleased. In the Kate Andrews game, we were in it for half of it, but foul trouble hit us pretty bad in the second half,” said Johnson.

“They were definitely a little bigger than us and once Alex (van der Stoel) fouled out, they started beating us up inside like crazy where we couldn’t match up. We knew some of our guys were getting close to four and five fouls, but there was no point in taking them out, because once we took them out, we couldn’t match up anyway. But I was still pleased with the team’s effort where the kids didn’t quit at all.”

The Vikings started off its zone tournament run with an 80-47 win over St. Mary’s Celtics last Tuesday at Lethbridge College.
Van der Stoel poured in 22 points and Vulcano had 20. Anderson added 13 points and Callum vanden Dungen chipped in 10 points.

“We definitely had some twists and turns this season where we had some good tournaments and some other tournaments that were not so great” said Johnson. “With a lot younger kids that’s kind of to be expected with the amount of Grade 10s I had. But, it was good development for them and hopefully they will keep at it and be ready for next year. We will have a lot of players returning.”