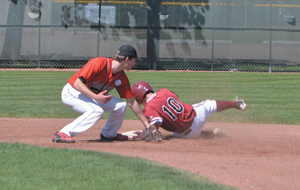 (Photo by Trevor Busch) SAFE!: Baserunner Liam Vulcano slides in safe at second base in a close play during the second game of a doubleheader versus Lethbridge on Sunday afternoon at Jets Stadium. The team travels to Okotoks to take on the Dawgs on May 14.

“It was a good weekend, we played really well Saturday against Great Falls, and we played well in the three areas of the game; offensively, defensively and pitching the baseball,” said Les McTavish, head coach of the Jets. “It was graduation weekend, so its a big day for the kids, and we were happy with how it went.”

On Sunday, May 8, the Jets saw their winning streak snapped at 8 games with a 5-4 loss to Lethbridge before coming back with a 9-0 victory in game 2.

“We played well, for the most part, the entire day. We just had one tough inning where we gave up five runs on Sunday morning, and ended up losing 5-4, but bounced back with a 9-0 victory,” said McTavish. “We were happy with the weekend. There’s bigger things then baseball this past weekend, as graduation was going on. It was nice for the guys to perform well in front of their family and friends, and have a good grad weekend.”

Offensively, the Jets only managed three hits. Cerny went 1 for 3. Binsfeld was 1 for 3 and Matt Rath was 1 for 2.

Game 2 saw the Jets score most innings cruising to a 9-0 victory. Carsen Perkins started on the mound, going 5 innings allowing 3 hits with 3 K’s. Garrett Nicholson went 2 innings allowing 1 hit with 1 BB and 1 K. Offensively, the Jets were led by Malainey, who was 1 for 4 with a triple. Grandmont was 2 for 4 with a 2 run HR and 3 RBI’s.

This weekend will have the Jets face off against the Okotoks Dawgs at the Seaman Stadium on Saturday, May 14, and returning home for a noon game against the Dawgs on Sunday, May 15, at the Jets Stadium.