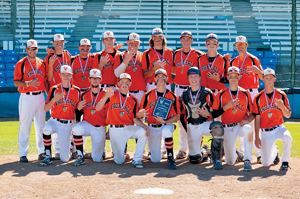 Any fears of the needed consistency to win the northern district championship for the Vauxhall Spurs baseball club were quickly erased as the Spurs ran the table to a 4-0 record to earn a berth at State later this week.

Staying clear of the loser’s bracket and being able to conserve pitching in the grueling nine-inning format heading into the championship, the difference showed as the Spurs dominated on the way to a 14-4 win over the Medicine Hat Knights in a game that was mercy ruled in seven innings.

The team had earlier squeaked out a 7-6 victory the day before against the same squad, which forced the Knights to play an extra game on Sunday prior to the championship.

“We played Medicine Hat right at the beginning of the year (13-7 and 13-1 wins) and then shortly after that, so we hadn’t seen them in like a month-and-a-half, and they were a totally different team,” said Joel Blake, head coach of the Vauxhall Spurs.

“But going through the winner’s side having not lost a game, that’s huge because you don’t have to play an extra nine innings. We were set up very well with our pitching.”

That included staff ace Jalen Lane that went the distance with seven strong innings which was aided once again by one of the strongest offences in the league this season during the regular American Legion ‘A’ season, as the squad put up double digits in three of its four-game district run.

“We were able to save our arms and they had already played a nine-inning game an hour before the final game, because they were coming up through the loser’s side. And it was friggin’ hot, there wasn’t a cloud in the sky that game,” said Blake.

“You got young kids, and they did a great job of battling, they have a hell of a ball club. Especially their catcher who caught 16 innings that day. It’s a long day, and I think with us coming in fresh not having to play that extra game, that helped us.”

The Spurs’ district run including tight 11-10 and 7-6 wins against Tri-County Cardinals and Medicine Hat Knights prior to the championship, along with a 24-3 pasting of Fort Macleod Royals who actually led 3-1 at one time before the Spurs exploded for 16 runs in one inning.

“We got hitting right down the line up. That Fort Macleod game, we looked at the box score afterwards and everyone had a multi-hit game, the guys we put in off the bench got hits,” said Blake.

“Reed Odland had a hell of a weekend at the dish and at the plate catching. Kaden Fujita swung it very well and Nick Bolt came out offensively.”

The one slight concern Blake had heading into the northern district tournament would be playing against weaker teams in the tournament and keeping that consistent killer instinct.
The adversity the Spurs faced in its tight games, the squad answered the bell every time.

“You would look at the box score after, and they would score and then we would answer right back. And then when we scored, our pitching would go out there and our defence would put up a zero which is huge,” said Blake. “Answering back and then when we have a huge inning, shutting them down. That was the way all the way through and we scraped. In the past, there were times we could panic or tense up a little bit. We didn’t really do that at districts. We did a better job of staying relaxed in those tense moments.”

The Spurs are now off to the Montana State Tournament in Great Falls which begins Thursday, where the team will be looking to make some noise instead of going out in a whimper.

“Since I’ve been there the last two years, we’ve never won a game at State, so I told the boys I don’t want to go down there and get embarrassed. We need to be ready to play, there’s going to be some really good teams there,” said Blake. “If we come out and play, throwing the ball, playing defence and swinging the bat the way I know we can, we should be OK.”

SPURS JANGLE: Vauxhall Spurs earned district and state recognition for the 2016 American Legion ‘A’ season as Jalen Lane (RHP/C), Ryan Marshall (OF/RHP) and Vance Fode (1B) got selected on the All-District and All-State teams.

“He’s been solid for three years for us, and this year, he had just one bad start. His winning percentage on the mound was right up there,” said Blake of Lane’s stellar work on the bump.

“He is kind of the heart and soul on this team as a leader. He’s a tough, quiet kid who goes about his business and lets his actions speak for itself. He leads by example.”

One of the most feared batting lineups in the league, Marshall and Fode helped strike that fear in the hearts of opposing pitchers by anchoring the line in the No. 3 and No. 4 spots in the lineup.

“They were our two big bats in the middle of our lineups that sparked the batting order.”