Posted on September 16, 2016 by Vauxhall Advance 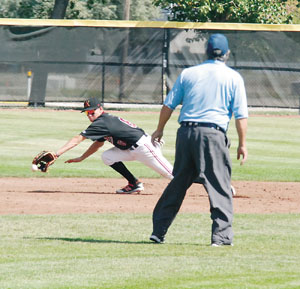 (Photo by Greg Price) STRETCHED OUT: Despite being early in the season, the Jets flashed solid glove work at times during three early games versus the Prairie Baseball Academy.

Now fully taking off in its second decade of existence on the baseball runway, the Vauxhall Academy of Baseball Jets have been getting their flight patterns settled to start the season.

The team had some intersquad games to start the month of September off before having its official first game to coincide with Spirit Week last Wednesday, a 6-2 loss to Prairie Baseball Academy.

Ben Erwin started on the mound, going one inning, allowing one hit, two unearned runs and a walk.

Offensively, the Jets were led by Damiano Palmegiani who was 1-for-4 with a two-run home run. Owen Harms was 2-for-4. Brett Mercier was 2-for-3. Matt Gough was 1-for-2 to round out the offence.

The team then took to the weekend at Jets Stadium and split with PBA on Saturday. Game 1 was a 9-5 loss.

Offensively, the Jets were led by Liam Vulcano who was 3-for-5 with two doubles and a solo home run. Victor Cerny was 2-for-3 with an RBI. Harms was 2-for-4 with an RBI.

Game 2 saw the Jets get in the win column with an 8-5 victory.

Zach Newman earned the save, going one inning, allowing one hit with one unearned run.