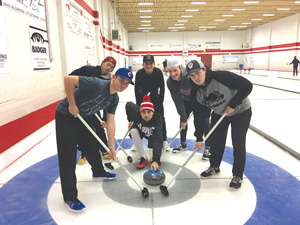 (Photos Submitted) EAST/WEST RELATIONS: Four Japanese student/athletes from a private school in Sendai, Japan were shown southern Alberta hospitality in Vauxhall, training with the Vauxhall Academy of Baseball and taking in many things Canada had to offer like curling and Western Hockey League games as the group took in many sights the area had to offer.

It was a love of baseball that first bound a Japanese exchange these last couple of weeks to the Vauxhall Academy of Baseball, but perhaps the love of each other was the lasting impression as cultures collided.

Four players from an elite baseball program/school in Sendai, Japan, have been training with the Vauxhall Academy of Baseball these last couple of weeks, while also taking in all that southern Alberta had to offer.

In Canada, known for its winters and winter sports, Yusuke Imai, Ryohei Chiba, Ren Chiba and Ren Mizuoka got first-ever glimpses of hockey and curling, while being surrounded by drifts of snow in their southern Alberta journeys.

“It is very exciting, fast and fierce,” said translator Maiko Ogita, speaking on behalf of the four kids and their impressions of WHL hockey, as the four got to view two Lethbridge Hurricanes games.

Among other Winter Wonderland activities for the Japanese ball players was going to Waterton Lakes National Park, trying their luck at curling for the first time in Vauxhall and experiencing playing hockey at the local arena.

Coming from Sendai, the capital city of Miyagi Prefecture, Japan, and the largest city in the Tohoku region, and the second largest city north of Tokyo.

Given the kids reside in a northern region of Japan, they know of cold, but not quite the kind in southern Alberta where -30, -40 Celsius can be encountered with wind chill factored in.

“Sendai is pretty cold too, but it is a different cold. It is a very dry cold, while it is very humid in Sendai,” said Ogita, adding the Japanese youth marveled at the architecture found in southern Alberta along with their wide open spaces. “There are not many tall buildings in Canada, especially Vauxhall. A lot of the houses have only one floor and a basement. There are no basements in the houses in Japan. They are very surprised with that. And the roads are so much wider. One lane in Canada is like two lanes in Japan. The cars are packed in Japan, it is way easier to drive here.”

The four joked of how much more people eat in Canada, noticing constant snacking amongst Vauxhallites.

“There is more snack time here. There is no snack time in Japan, they are not allowed to bring snacks to school. There are lunch programs in Japan where kids prepare lunch for each other,” said Ogita. “It is very slower here, I like it. “

Yusuke, Ryohei and the two Rens have felt very welcomed in their experience with the Vauxhall Academy of Baseball in the different adventures they have gone on living in residence and going to places like the Royal Tyrrell Museum of Paleontology in Drumheller. “

A lot of questions are asked and a lot of interaction has been made,” said Ogita as smiles are beaming from the four Japanese athletes.

Hockey is to Canada as baseball is to Japan in its national importance.

“It is not our national sport, but is the biggest sport in Japan,” said Ogita, adding the four Japanese youth have found training methods in Canada to be quite divergent.

“In Japan they train by themselves and don’t use any machines, but over in Canada they use machines. In Japan they run more, but they do more weight lifting here for your muscles.”

The four players roam all sorts of positions for their team in Sendai, in left field, right field, third base and shortstop. One of the players started playing baseball at three years old, with heroes such as Bryce Harper, Masahiro Tanaka and Ichiro Suzuki.

Whatever the skill level or position, there is a hierarchy of respect in Japan for veterans on the team.

“In Japan, even if you are a year younger, you have to show a lot of respect to the older ones, but in Canada, everyone is the same,” said Ogita.

Vauxhall Academy of Baseball Jets head coach Les McTavish found many subtle differences in how baseball is viewed when he helped train the elite baseball program in Japan a few years ago that helped lead to the cultural exchange between the two programs this year. Two Jets players will be making their way to Japan in June.

There is a respectful protocol for the game in Japan that looks not to the flash of big innings with home runs, but the precise manufacturing of runs.

“They play for one run. They try and get one run every inning. They try and put pressure on the defence, bunting, hit and runs and base stealing. Very few swing and misses. They minimize damage really well on the mound. They all throw strikes and throw an off-speed pitch for a strike,” said McTavish.

The physicality is less, as trying to break up double plays by going hard at middle infielders is frowned upon. Batters for the most part are not hit on purpose, as a tip of the hat is given by the pitcher as a sign of apology when a hitter is plunked. Showing up the other team is avoided.

“None of those boys are allowed social media. They are training, their life is baseball,” said McTavish. “You are there to be a student and a baseball player, period. Everything is so structured and so rigid, everyone is in unison for an hour straight (in a practice).”

That respect for the process in Japan even took McTavish off guard a bit when he was training the boys last week  at the academy.

The four bowed before entering and after leaving the batting cage according to McTavish, and did not leave until McTavish tipped his hat, perhaps signifying they were allowed to leave the batting cage, as part of showing respect to their mentors.

The four Japanese baseball players come from a private school of over 3,000 students. There are 100 students who train for the school baseball team with only nine players playing, with a bench of nine other players.

“It is such a prestigious school that parents want to send their kid there to train, even if they never play in a game,” said McTavish, adding Yusuke, an outfielder, is the captain of the team. “And the sporting facilities are incredible. It would be similar in size to the University of Lethbridge, with tennis courts, baseball fields and a stadium.”

McTavish has been pleased with the cultural exchange as both the Japanese and Canadians got to learn so much about each other.

“We had successes with kids over there and here. It is just as much about the cultural and personal experiences as it is about the baseball experiences. These are life-long memories,” said McTavish. “Things are so different, yet they are the same. There is such a strong Japanese heritage in southern Alberta, it (the exchange) is something we can build on for years to come.”