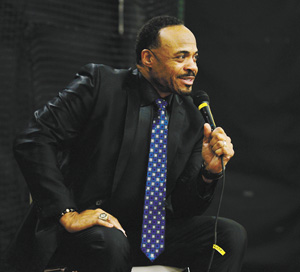 The Vauxhall Academy of Baseball Jets Awards/Scholarship Fundraising Banquet proved a rousing success once again on Saturday at the Vauxhall Community Hall.

The 11th annual edition featured numerous Jets recognized with scholarships, many high-end sports memorabilia being auctioned off and none other than former Toronto Blue Jays great Jesse Barfield as the guest of honour.

The rocket-armed right fielder of the 1980s sat down with master of ceremonies Keith Miller for a question and answer period as the very personable Barfield charmed the crowd with his diamond wisdom and sly humour along the way.

Growing up in Joliet, Illinois, the third-largest city in the state was known more for its basketball and football than its baseball.

The city had its share of players being drafted by Major League Baseball, with Barfield being selected in the ninth round of the 1977 amateur draft by the Blue Jays. In the team’s first year of existence, it was Barfield that made the largest impact in that inaugural draft for the franchise as names like Dave Hodgins, James Teahan, Daryl Hill, Richard Hertel, David Rohm, Scott Gregory and Jack Hollis flamed out.

With scouts watching, Barfield noted it was one fateful high school hit that secured his spot in the draft.

“The Blue Jays drafted me because I hit a ball through a picket fence in the seventh inning,” said Barfield of his hit against fellow Joliet alumni Bill Gullickson, who would end up being drafted second overall in that same 1977 amateur draft, as the two schools squared off.

“Bill was the first pitcher drafted that year. Had that not happened, the Blue Jays probably would not have drafted me. I’m thankful for that day, Bill was a great pitcher.”

As an expansion team at the time, Barfield bashfully admitted he did not know anything about Canada or its feathered friends.

“I didn’t even know what a Blue Jay was,” said Barfield to the laughing packed crowd at the Vauxhall Community Hall.

Barfield had signed a letter of intent to study architecture at Peoria, and initially balked at the Blue Jays first offer of $2,000 to sign, given he had his scholarship secured for school. More money was offered and Barfield officially started his MLB journey.

He recounted the days as a youth hanging out at Comiskey Park in Chicago, sitting in the upper deck in right field as a 13-year-old. He told his friends one day he’d be playing right there. It just so happened that Barfield would make his Major League Baseball debut on Sept. 3, 1981…against the Chicago White Sox at Comiskey Park.

“I thought back to that story that I told my buddies,” said Barfield, adding he secured 50-plus tickets to the game to show his friends how the dream came to fruition.

Barfield got a crash course that he was in the major leagues that day, where a hard hit grounder was hit into the gap that was ceremoniously plucked up and thrown over to first for the out.

“It was hit in the hole, the guy picked it and threw it across….bang,-bang play. It showed me something as a rookie. I said to one of my buddies, ‘Man, that’s a hit at ‘AA’ a couple of nights ago.’ And he said, ‘this isn’t ‘AA’, they make that play all the time’,” said Barfield.

Barfield would not go on to hit for a high average overall in his MLB career, sporting a .256 career average. But, it was advice from then manager Bobby Cox that led Barfield to become a more complete player and regular patrolling the outfield along with left fielder George Bell and center fielder Lloyd Moseby, accounting for one of the most formidable outfields of the 1980s. Barfield spanned a Major League career that swatted out 241 home runs and 716 RBIs.

“I walked into his office in 1984 and asked him what is it going to take for me to get out there every day. And he told me to take a seat. When Bobby Cox tells you to take a seat, you do it. Back in his heyday, he led the league in ejections. We had the feisty Bobby Cox, Atlanta had the old-grumpy Cox,” said Barfield. “He said when you learn to hit the slider to right center against those good righties, you will be there. I said ‘Yes sir,’ and that really helped me because it changed my approach as a hitter. He was such a positive influence. One time when I was in a funk, he asked me where I was going and I said the video room to look at tape to see what I was doing wrong. And he said, why not look at tape of your good games and look at what you are doing right.”

In 1985, Barfield helped propel the Blue Jays to its first playoff appearance in franchise history, hitting a career high .289 that season, swatting 27 home runs and 84 RBI to go with 22 stolen bases.

“That year I actually started off in a bit of slump and George Bell came up to me and said you got a great mind, why you trying to force things. If you don’t get it, I’ll get it, if I don’t get it, Shake will get it (nickname for Lloyd Moseby). Relax and be yourself,” said Barfield, who was aided by the tutelage of hitting coach Cito Gaston as well. “I got better after that. George was a great teammate. As a hitter, there was no better hitting coach than Cito Gaston. He was Hank Aaron’s roommate, so that should tell you something right there. He kept things simple and took your strengths and worked from your strengths.”

Although he led the league in home runs that year in 1986, Barfield stressed he was not trying to over extend himself as a hitter to get those 40 dingers, noting a good portion of his moon shots went to center or right field.

A player Barfield both hated and respected playing against was George Brett.

“He’d still be wearing that (World Series) ring from ‘85. I’d see him in the airports sometimes and I’d say ‘Man, you still wearing that ring.’ And he’d say ‘Yup’,” said Barfield with an envious chuckle of that season where the Kansas City Royals rallied from a 3-1 deficit to defeat the Blue Jays in the 1985 American League Championship Series. “But I liked playing against him, because he reminded me what a hitter should be in the purest sense — singles, doubles, triples. He hit his home runs (317), but he was the only guy to win batting titles in three different decades. That is consistency right there.”

At the end of the Q&A Barfield gave words of wisdom to the players of the 2017 Vauxhall Academy of Baseball Jets in pursuing their baseball dreams.

“Come up with a good plan. Think about the situations that are in front of you,” said Barfield, of game situations. “Be smart, know your strengths. Work on your weaknesses, but don’t forget about your strengths. When you get up to home plate, don’t worry what other guys are doing and what have you. Live in the moment and you give yourself a better chance to be successful. If you are smart about it, you will go as far as your body will let you. Some of you guys are going to go far. Whether you make it or not, take this experience  and use it as something positive in your life. This game will take you to some pretty amazing places. Stay hungry, stay humble and stay focused. God bless you guys.”