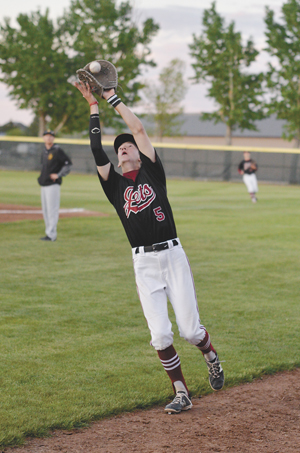 (Photo by Trevor Busch) CATCH PHRASE: Infielder Ty Penner catches a foul ball near the first base line, during a Friday night battle versus the Calgary Jr. Dinos as part of the VAB’s 11th annual Invitational Tournament.

Vauxhall Academy of Baseball Jets were the epitome of perseverance in taking home the title of its 11th annual Haven Agencies Tournament at Jets Stadium.

The Jets took full advantage of an under-armed Lethbridge Elks team to put on a hitting clinic in a 17-2 domination that was called after five innings, with the Jets facing plenty of adversity themselves all tournament long.

“The Elks were out of arms a little bit towards the end. The first game in the tournament against them, they threw Bryce Fraser at us who was one of our former players who had a really good year in college at Kansas. They threw a college pitcher against us the first game,” said Les McTavish, head coach of the Vauxhall Academy of Baseball Jets.

In the championship game, the Jets belted out 13 hits to power its 17 RBI.

Dayton Peters was 2-for-3 and Matt Rath rounded out the offence, going 1-for-2 with three RBI.

The pitching was just as dominating for the Jets as two hurlers combined for a five-inning no hitter.

The Jets were able to reach the lofty skies of the championship despite having troubles finding the necessary pilots to battle the turbulence as the academy was shorthanded throughout the tournament run.

“As the tournament wore on, we were beat up. We had four guys away with Team Canada, we had one player away with Team Manitoba and we had the flu bug going throughout our team,” said McTavish.

“Every day there were different guys out of the lineup with the flu and everything else. It was certainly a challenge, but at the same time, it went really well.”

The opening game McTavish spoke of against the Elks was a 4-3 victory last Thursday at Jets Stadium that had a flare for the dramatic as Binsfeld smacked a walk-off home run in the bottom of the seventh inning.

Adam Macko started on the mound, giving up three runs in the first inning before cruising the rest of the way, allowing three hits, two earned runs, with two walks and seven strikeouts.

Offensively, the Jets had a balanced attack against former Jet Bryce Fraser.  Vulcano was 1-for-3.

Play continued on Friday for the Jets with an 8-2 victory over Calgary Junior Dinos.

The Jets exploded for six runs in the bottom of the fourth inning to seal the win.

Saturday’s slate featured a split, as the Jets did its impression of Dr. Jeykll and Mr. Hyde in its play.

Jets were grounded by Medicine Hat Monarchs 9-8 before bouncing back with an 8-0 blanking of Great Falls Chargers.

Kaiden Cardoso was 1-for-4 with an RBI.

Game 2 on Saturday saw Erwin dominate on the mound, going seven innings, allowing one hit and striking out 11.

“The strength of our program over the years has been we’ve faced adversity and worked through it. We only carry 22 and that sounds like a lot during certain times, but it’s not a lot when we get situations like this with players away and players battling illness or injury,” said McTavish.

“A lot of the accolades go to the kids where they battled hard and they played their best game when they had to. We are very thankful for everyone coming out and watching. It was our last home games of the season and we are thankful for everyone who came out to support us and who helped sponsor the tournament.”