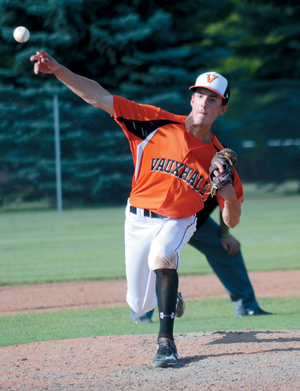 The hit parade continues for the Vauxhall Spurs baseball team as there was plenty of offence to be found in a strong tournament run in Helena, Mont. this past weekend as the squad enjoyed a 3-1 record.

“The offence showed up again as usual which has been the benchmark of our team. A couple of bad innings against Glacier cost us a placement in the 3/4 game the next day, but all that stuff is secondary to us just showing up to play whoever is in front of us and do our best to win the game,” said Ronnie  Deck, head coach of the Vauxhall Spurs baseball team.

Offence could be found among all the clubs in the tournament, with Deck noting in the earlier parts of the season, it takes longer for the defence and pitching to catch up to the bats from the long layover from the fall and winter months.

“All these guys look like they swing the bat well. That is a characteristic of teams who have spent a lot of time indoors from January on, leading up to the season. They get a lot of offensive reps. It’s not that teams are playing bad defence, they are just not as polished defensively,” said Deck.

That includes the Spurs themselves which Deck admitted the team has to improve on as the season progresses for the squad to realize its full potential by the time districts roll around.

“We didn’t play our best defence at all in any of those three days. You have to battle for complete games, you can’t lose your sense of awareness of where the game is or else teams will score three or four runs on you in an inning,” said Deck. “Defence is always a work in progress. All these kids can catch it and all these kids can throw it. But, the difference is, are we ready for the ball between every pitch? Are you ready for the baseball every single time the ball is pitched? We have to get better at getting prepared for the ball in every single pitch and I think the boys are buying into that. I always tell these kids the strongest muscle in the body is the brain, if you use that to the best of your ability, it will make you a much better athlete, especially on defence, where you have a lot of down time if you’re not the pitcher or catcher.”

While the diminutive Carson Becker has been battling injury for the Spurs, he has been making his presence felt as a spark plug in the limited time he was able to step on the field in this past weekend’s tournament.

“He’s hurt a little bit. With his shoulder, he can’t throw so he can’t do as much for us on defence. But as a hitter and a courtesy runner, he took over two of our games. He made that much of an impact in limited time where he helped us win two games without even being in the (starting) lineup. That’s the kind of team game that will propel these guys later in the year if everyone can find different ways to win games,” said Deck. “Becker took his opportunities to impact games and he single-handedly turned around some games for us.”

The Spurs have pushed its record to a solid 7-2 in which the team’s offence has set the pace so far in the early-going of the season.

“The offence collectively, every guy that steps into the box is having good at bats. We are getting timely hits and we ran the bases like we want to which is one of the pillars of this team which is relentless base running,” said Deck.

Earlier in the week, the Spurs played in American Legion ‘A’ regular season competition with a road sweep of a two-game set against Medicine Hat Knights last Tuesday in an extra-inning 8-6 win and a lopsided 20-5 victory.

“Those games were hard fought. The first game we were down 4-0, but the guys showed their belief in our offence. They stayed with it and chipped away,” said Deck. “We had a big inning or two with some timely hits late in that game. These guys did not panic when we went down 4-0 on the road. that’s something I appreciate about this team, they do understand offensively they are capable of coming back at any time.”

Kaden Fujita started on the mound and did what he had to do according to Deck to minimize the damage early on against the Knights with Blaise Unruh coming in and providing two innings of shutout relief for the Spurs to win the game in extra innings for the win.

“Our pitchers are beginning to understand that if they throw strikes and help our defence get off the field, it will give our offence enough opportunity to give us a chance to win,” said Deck.

The Spurs managed to thump the Knights 20-5 in the second game, but Deck cautioned the score made the game appear a lot more lopsided than it really was.

“We jumped on them early with three runs in the first which is the best thing that could have happened coming off an extra-innings battle. But that game was not indicative of the score. Late in that game, there was an inning where any ball we touched with a bat found a hole,” said Deck. “That’s not going to happen every day realistically. Every single ball that touched one of our bats squirted through a hole or landed in the outfield. It was that one rally that pushed the score to that number.”