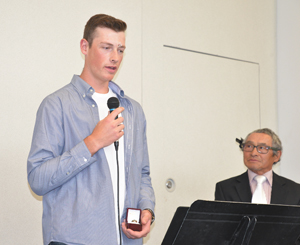 Vauxhall Academy of Baseball Jets finished their flight of the 2016/2017 season quite smoothly, landing on the runway of a very successful season.

That season was highlighted at the Sixth Annual Celebration of Achievement at Vauxhall High School earlier this month.

The team was on the cusp for the very first time recording only single-digit losses right before the end before recording a still very impressive 31-10 record, making it one of the most successful seasons to date in the history of the program.

What makes the feat even more impressive is the fact that five players with the Jets had Canadian Junior National Team commitments, meaning the squad was constantly short handed not even counting injuries and illness that popped up.

“It was one of our most successful seasons on multiple fronts, not just on the baseball field, but off of it as well. We had four players with four Division I commitments and we won a lot of baseball games. Everything that we did, the kids seemed to do well in, and it didn’t matter the kind of adversity we faced,” said Les McTavish, head coach of the Vauxhall Academy of Baseball Jets.

“Whether we were short bodies or not, that’s 31 victories with so many players missing throughout the year is tremendous when you think about it. We were playing with 16 players throughout the entire season.”

Those wins included three tournament victories including the ever-elusive Best of the West, which the academy has only won three times in its 11-year history. All nine seniors on the Jets have committed to play baseball at the college level be it through academic or athletic scholarships.

“The boys earned it and should be proud of those accomplishments,” said McTavish.

Those accomplishments included several awards that were handed out to players at the Celebration of Achievement.

The award night also feature a bold prediction where head coach McTavish noted a player or two baseball fans witnessed this past season from the 22-player will be donning a Major League Baseball uniform, playing on the biggest stage sometime down the road. Several player shave been drafted my major Baseball Clubs, but have never broken through due o injury or circumstance.

“I won’ say names to put undue pressure on these kids, but there are a couple we have in mind that we strongly believe we will see a Major League Baseball player from this group. This group handled adversity in so many things really well which is an attribute you need in the majors,” said McTavish.

“It will be exciting to see where things are going to lead and I think all these guys are grateful for the community of Vauxhall and the M.D. of Taber in welcoming them with open arms and providing them with a great opportunity.”