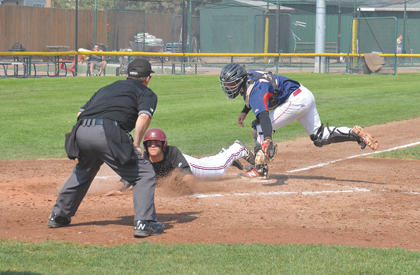 The Vauxhall Academy of Jets Baseball team have blasted off to another baseball season where expectations are always high.

“It’s a good group. We returned a lot of solid players. We returned our entire infield from a year ago. That certainly helps,” said Les McTavish, head coach of the Vauxhall Academy of Baseball Jets.

“We also have (returning) a couple of good arms and outfielders. We are excited about our new crew, too. We have some balance offensively.”

The Jets had plenty of fan support at its home opener last week as schools were celebrating Spirit Week, and the Jets earned a 12-4 win over Prairie Baseball Academy, belting out 17 hits in the process.

The Jets then planned another four games against PBA at home at Jets Stadium where the squads split both days. The Jets won 6-2 and lost 10-6 on Saturday, and winning 14-8 and losing 6-5 on Sunday.

“We have the makings of a very, very solid group. We will see, you never really know until you get part way through the season and see these players at game speed,” said McTavish.

There are 15 players and McTavish that are in Toronto this week for the Tournament 12 in Toronto. The Jets play in a Kelowna tournament starting on Sept. 23.