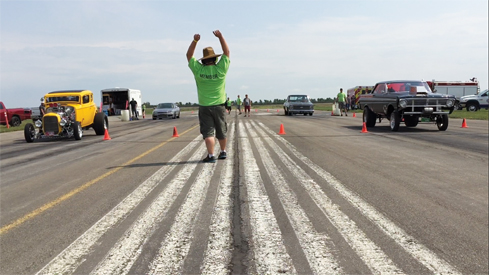 The pavement at the Vauxhall airport is about to see more action than just airplane tires.

The first annual “Race Warz” drag race is coming to the Vauxhall airport via Street Wheelers on Sept. 23.

While this race looks to be smaller than the main event in Lethbridge, the club is still expecting a decent sized crowd.

“This event is a little bit of a smaller event, it’s a good one for the drivers, we’re expecting 50-75 different cars and about 100 or so spectators, there’s a cool feel to the event and when people come they can back their truck up in a specific area and even watch from their tailgate if they want or bring a lawn chair and we’ll have a good area set up for that,” said Dean Parker, treasurer for Street Wheelers.

The club hosts different races in different towns including Fort Macleod, Medicine Hat and of course Street Machine Weekend in Lethbridge and now they’re adding Vauxhall to their arsenal.

The club has been hoping to bring their events to different towns around southern Alberta for awhile now and they jumped at the opportunity to host one in Vauxhall.

“We want to host events in different places in southern Alberta if we can and it was an opportunity to do some racing in a different community,” said Parker.

In order for the races to happen, the club had to present to the M.D. of Taber and the council was in favour and supportive of the races.

Especially since the club had been able to run drag races at airports before without causing any difficulties or  damages to the runway.

Now with the event only a few days away, Parker says the entire process of putting the races together went about a smoothly as it could.

“We’re really looking forward to it, the M.D of Taber council was really cooperative and really supportive of the project, we met their requirements and they’ve been a good help along with the whole process.”

A big reason for the relative ease was due to the cooperation between Street Wheelers and M.D. council.

“We just had to meet council’s requirements for insurance and it was brought before the airport authority as well,” said Parker.

“They’ve been great to work with and the many questions they’ve had we’ve been able to answer, we’ve been working really good with them.”

As for the event itself, Parker says if you go to any of the events put on by the club, you may recognize some of the cars going toe-to-toe at the airport as many of the local drivers will be a part of the spectacle.

“Local friends and local street cars and a few of the big hitters, as long as it’s a street legal car and passes safety then it’s good to run.”

The races will be an 1/8th of a mile heads up style with lots of passes and no classes, so drivers will have plenty of shots to hit the tarmac.

While the weather has been hot and dry well into September, there is always a chance that it could rain but the club doesn’t see too much concern with the chance of precipitation even if the event is weather permitting.

“Not too worried about it, last year when we did it out in Fort McLeod it rained for a little bit as we were setting up and then it cleared up so it is a weather permitting event so we’ll just pray for sunshine,” said Parker.

While the event planning is done for this year, some of the focus has been shifted to next year’s “Race Warz” event.

There are no guarantees that it will run again next year but the Street Wheelers club is definitely looking to bring it back for the foreseeable future.

“We’ll see how it goes this year but yeah definitely we’ll look to do it every year if we are able to as a club, so far the experience this year has been very favourable so we would definitely would consider doing it out here again,” said Parker.

Vauxhall is the newest location to host a Street Wheelers event but the club doesn’t see themselves adding any more towns to the list anytime soon.

Travelling further and further away from Lethbridge is something they want to avoid but they’re hoping that Vauxhall is close enough to still bring in people from the Lethbridge area.

With the event nearing, the club wants to remind those who are going to be attending of the rules that have been set forward.

“One thing we do want to make sure spectators know is that with the fire ban and dry conditions there is a no smoking policy, it should be fairly understandable why we have that in place and also we have zero tolerance for alcohol,” said Parker.

Admission for spectators is $10 and $50 for drivers and the racing will get underway at around 10:30 a.m with gates opening at 9 a.m.