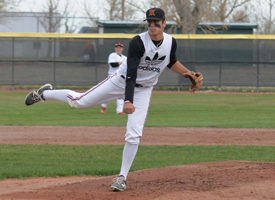 SMOOTH LANDING: Before the Jets wrapped up their fall season, the team once again participated in their annual 100 Inning game on Oct. 19. ADVANCE PHOTO BY: COLE PARKINSON

With winter on the horizon, the Vauxhall Jets are getting ready to head inside until the spring season begins.

Now with the fall season officially wrapped up, the Jets and their coaching staff get a chance to recharge their batteries before getting back to work in their indoor facility.

The Jets had a good spring with the team finishing up with a record over the .500 mark in the shortened season due to a surprise snowfall at the beginning of October.

“I think we had a pretty good fall, you know it’s always a challenge in the fall because you have players coming over from all sorts of different programs and different expectations. Our challenge each fall and our goals for each fall was to get 22 guys pulling in the right direction and understand how much work, time and effort it takes to get to the next level. I certainly think that we accomplished that, I was proud of a lot of players who made some big adjustments and it’s not always just about changing their habits or their arm action or their hitting. It’s about trying to get them to understand how much time and effort it’s going to take to get the next level of baseball,” said head coach Les McTavish.

While McTavish was satisfied with his team coming out of the fall season, many of his players had the chance to see their hard work pay off.

Between playing in big tournaments or signing scholarships, the coaching staff was excited to see rewards coming to their players already.

“We were happy with the fall and the effort the guys put in. We had a lot of good accomplishments, guys signed scholarships and we had 16 players at the Tournament 12 in Toronto which is certainly an accomplishment. We were really happy with it overall.”

As November is right around the corner, the team was happy that they had a chance to play in decent weather.

McTavish says that the autumn season in southern Alberta can be unpredictable but this year they went relatively unscathed in terms of cancelling games.

“It always is because you never know what the fall weather is going to be like and it’s nicer now then it was two weeks ago but we certainly missed one major weekend (Keith Jorgensen Memorial Tournament). At the end of the day we were able to get games in that we needed to get in. Now we spend a couple of weeks trying to get the field maintenance done and ready for our winter training.”

Before the players and coaching staff go full force into the winter months, they plan on letting the players get a few days of rest.

Many of the players have been on the field since the beginning of the year so the coaching staff wants to let the team have some time off.

“Players at this stage of the game are tired. It’s been a long year and these kids have been going hard since February so it’s a long go. For some of the kids new to our program it’s the first time they’ve ever played in the fall so I think getting into recovery mode right now for the next week or two. Then overall as a group getting physically stronger is going to be critical,” said McTavish.

Once they do head inside, coaching tactics shift compared to the fall season.

In the fall season focus is on getting the team playing together, once they head inside it’s about making each player better individually.

When things get kicked back into gear, the players will be spending lots of time in the indoor facility.

“Basically we break into smaller groups and we go five days a week. On Wednesdays we usually go before school and then after school but we take the majority of weekends off. Smaller groups and more individual instructional time as opposed to team orientation.”

The wait now begins until the Jets can once again take the field.