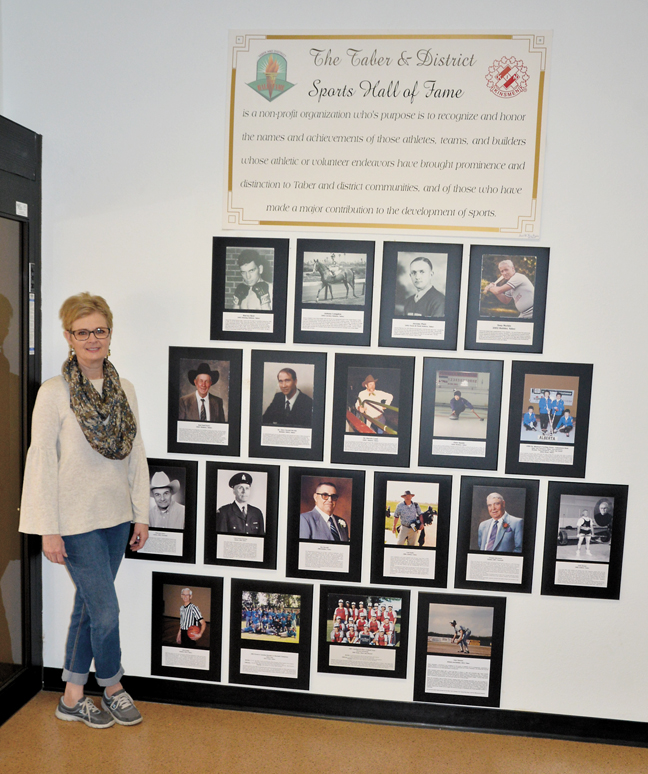 Editor’s Note: The following story is extra copy that could not be fit into The Taber Times’ jam-packed Insight magazine that was featured in the Feb. 21 issue of The Taber Times. Extra copies of the magazine can be found at The Vauxhall Advance office.

When the sportsfield complex north of Taber was named after Ken McDonald in the late 1990s, a flurry of requests came into the town to name streets or sportsfields after prominent members in the community.

Finding a way to focus more of that desire into a singular recognition, the Taber and District Sports Hall of Fame was eventually born.

“We had a number of requests come into the Town of Taber and the rec board for naming parks and streets and different things after people. At the time I was on the rec board and the Town of Taber had no policy or way of recognizing those individuals who had contributed to sport in the area,” said Debbie Sargeant, president of the Taber and District Sports Hall of Fame.

Categories were made for the recognition of athlete, team or builder of the sports culture in Taber and surrounding rural areas.

An ad hoc committee was initiated by Sargeant of individuals interested in promoting sport in the area by recognizing those who have made huge strides on the municipal, provincial, national or professional sports scene.

“Initially, when our group of individuals came together and formed the Taber and District Sports Hall of Fame committee, we had to decide what the criteria was going to be and what categories we were going to have and so on,” said Sargeant. “I contacted various other communities within and outside the province to gather as much information as possible. They were communities that had community sports hall of fames already set up. We went through all the information and picked out what could apply to us and our needs in our situation. That way we didn’t have to reinvent the wheel. There was some trial and error the first couple of years.”

Information in nomination packages had to be tweaked and more detailed for people who wanted to nominate.

Take a look at the Wall of Fame which is currently housed at the Administration Building, and it is an impressive blend of Who’s Who in the southern Alberta sports area, despite the population base that is up for consideration being less than the 20,000 mark.

Darwin (DC) Lund in rodeo, Johnny Longden in horse racing, Elsie Sasaki in curling, Gerald Beckie as a local builder, Ted Smith in golf, the 2004 bantam Taber Jets Baseball Team — the list goes on and on in the wide variety of sports that have been recognized by individuals, teams and builders that have helped shape the southern Alberta sports landscape.

“We had to find a home (for the hall of fame) and it is currently in the Town of Taber administration building. Various other sports hall of fames are in different sports complexes, but we didn’t have one and we still don’t to this day to house something of this sort.”

Nomination packages are available all year long. There has been a downturn of nominations in recent years where induction ceremonies have had to go on a hiatus. Sargeant admits standards are high to get into the Taber and District Sports Hall of Fame.

“In some cases, people pick up nomination packages and once they read the information that is within the package, they realize the individual they had in mind does not meet the criteria,” said Sargeant. “There are definitely deserving people that are out there still, unfortunately for some of us that are on the committee, it’s a conflict of interest to nominate someone and select them. Nominations have to come from outside individuals.”

The hall of fame committee had been resistant to recognize accomplishment sin school sports given schools have their avenues for that recognition. That stance has been softened in recent years given how those accomplishments are becoming rare on the education landscape in building the school athletic culture.

“In smaller communities, schools are part of your community. Individuals within the school have committed 30 years to coaching in their school, that is building your community,” said Sargeant. “We don’t see any difference any longer between someone devoting 30 years to coaching minor hockey to someone coaching in the school. That is not a requirement in school, that is all volunteer work. Some don’t just coach volleyball, then they are coaching basketball and then badminton and then track. You are not going to find that anymore in schools for thaw length of time. It will be few and far between. Many coaches now for school sports are from outside community members.”

If there is anyone interested in picking up a nomination package for the Taber and District Sports Hall of Fame, they can call Sargeant who will e-mail it to them and she can walk the person through the process.

“There is some work to filling them out and it does take some time and effort to fill them out. We aren’t expecting a 40-page odyssey, just something in some chronological order and in some detail the individual’s contributions,” said Sargeant. “You do have to do some research on the individual or the team of where they contributed or excelled. Like an athlete, what level they have competed at and what have they won and they have to have some prove of that when they submit a package. It could be a photograph of someone winning an award, a medal at an international competition etc. We can’t just take someone’s word that someone has achieved some standard without some proof. Something like a hard copy or a graphic, a photocopy, an article from a newspaper.”