Vauxhallites tune into the voice of the Blue Jays at banquet 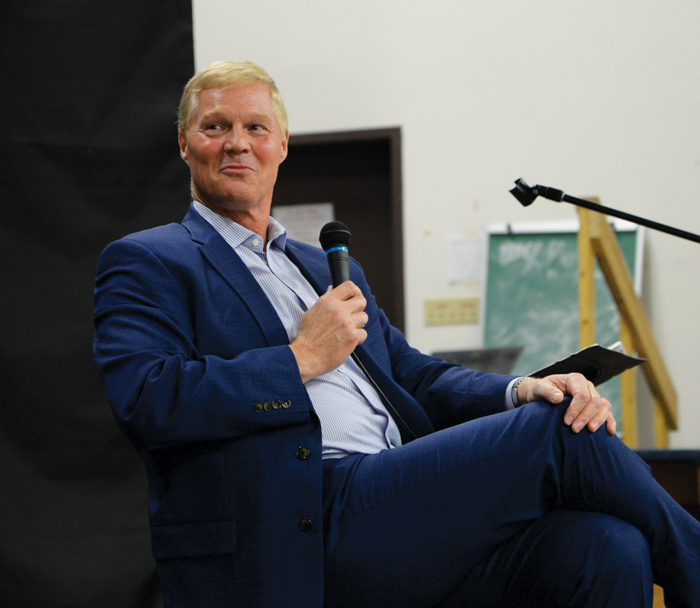 Q&A: Pat Tabler provided plenty of laughs and baseball stories that spanned his career from MLB player to now Blue Jays broadcaster during the Vauxhall Academy of Baseball’s annual banquet last weekend. For more photographs of the awards banquet, please see next week’s edition of the Vauxhall Advance. ADVANCE PHOTO BY COLE PARKINSON

The Vauxhall Academy of Baseball Jets held its 12th annual Awards/Scholarship Fundraising Banquet over the weekend to yet another packed house.

After welcoming Blue Jay greats such as Devon White, Jesse Barfield and Duane Ward in the past, this year the academy was pleased to welcome former Blue Jay and current Blue Jays broadcaster Pat Tabler.

Those in attendance were treated to a question and answer with Tabler and the Master of Ceremonies, Keith Miller.

Tabler was selected in the first round of the 1976 draft by the New York Yankees as an outfielder, although he would also spend time as a first basemen, second baseman, third baseman and designated hitter.

He didn’t begin his MLB career until 1981 after being traded from the Yankees.

“I got traded to the Cubs and they said ‘we’re going to send you down to Des Moines and as soon as the strike is over we’ll bring you to the big leagues’. That was the longest 50 days of my life in Des Moines, Iowa. I’ve never seen so much corn in my life,” said Tabler.

Tabler would spend just two seasons with the Cubs before moving to the Cleveland Indians in 1983.

During his tenure with Cleveland, Tabler was announced as an All-Star during the 1987 season where he totalled 11 home runs, 86 runs batted in and a batting average of .307.

He would eventually get traded to the Kansas City Royals in 1988. He joined his third team, the New York Mets, for 17 games during the 1990 season.

He was then brought in for the Toronto Blue Jays in 1991, right before their first fabled World Series championship.

Upon joining the Blue Jays in ‘91, he became teammates with Dave Stieb, who he had long hated facing in the batters box in years past.

“Stieb, he had a great fastball that went into right handed hitters and a slider that went away from them. As a hitter, you can’t go up there expecting to hit both of them so you ‘say I’ll hit this one and take the other one’. So I said I’m going to take the fastball because I know he’s going to get me out with sliders. I’m up there looking for a slider so I get a little bit closer to the plate and I swear it was Buck Martinez catching. He threw a fastball inside and drilled me right in the ribs and it hurt like crazy,” said Tabler. “I think I got two hits off of him my entire career and that was it.”

The Blue Jays would of course go on to win the 1992 World Series upon which Tabler retired soon after.

While being named an MLB All-Star was a major honour for Tabler, he was most proud of the World Series ring, especially since he was able to end his career on top.

“Baseball is a team game played by individuals and the individuals have to be great for the team to be great. Anything that I did in the game, I don’t look inward at myself that I did anything. I mean it was nice to be in an All-Star Game and some of the other things like play on a World Series team,” said Tabler.

“Being able to wear a World Series ring, that is the most incredible thing you can ever think about. I won the last game that I ever played in at the Major Leagues, how many people can say that? To run out on the field and then retire, is there any better way to go out?”
Tabler finished out his 11 year MLB career with 47 home runs, 512 RBIs, a batting average of .282 and an average of .489 with the bases loaded, which was a big reason for him being dubbed Mr. Clutch.
While some of the audience remembers Tabler as a player, the younger generation associates him as one of the voices of the Blue Jays.
After hanging up his spikes in 1992, it was by chance he stepped into a broadcast booth.
“We win the World Series, I retire and I went on a vacation for the first time in 17 years in March of 93. While I was gone the Blue Jays were calling and they left messages, this was before cellphones. When I got back home, the season had already started and there was a message from Pat Gillick (then Blue Jays GM) saying ‘where are you? We’re trying to get you up here to get your World Series ring for Opening Day’ so I missed it,” he said.

They eventually worked out that Tabler would receive his ring on the field from Blue Jays manager Cito Gaston during a game against Tabler’s former team, the Kansas City Royals.
What happened after, though, is what sent his post career life into a different orbit than he was planning.

“I got my World Series ring, went up to the booth and did an inning with Tom (Cheek) and Jerry (Howarth) and then went up and did an inning with Tommy Hutton and the TV guys. I got on a plane and went home. I said ‘that’s it, I’ll never be in Toronto again in my life’. Well, when I got home there was a message from a guy at TSN, who happened to be watching, and he said ‘we’re starting Baseball Tonight, would you like to audition to be a studio broadcaster?’ And I said yes. So I got back on a plane the next day back to Toronto,” added Tabler, who also mentioned he had a few nerves during his first shot at broadcasting. “I auditioned in the morning, took voice lessons in the afternoon and I was on that night, that’s how I got started in TV. Let me tell you, when that red light came on and it was my turn to talk, I’d rather be facing Randy Johnson.”

After starting at TSN, Tabler was the studio analyst but when Tabler’s friend and current broadcasting partner, Buck Martinez, resigned from the broadcast booth to manage the Blue Jays, he got the chance to call some games.

“When Buck became the manager, I took his place in the booth at TSN with Dan (Shulman). When that didn’t work out for Buck,” said Tabler with a laugh.“A 150 games later, we got back together in 2010.”

One thing Tabler highlighted as a great moment as a broadcaster is the fan support the Jays get when the team plays in Seattle.

During the home series for Seattle, droves of western Canadian Blue Jays fans drive down to take in a couple ball games and Tabler implored the fans to continue.

“Keep coming! That’s one of the neatest things I’ve ever seen in baseball when they open the gates and all the Blue Jay fans come flooding in. All the Mariners fans start crying, it’s awesome!”

Tabler also gave some words of wisdom to the VAB Jets on following their dreams of playing professional baseball.

“We talked about trusting the process and being a good team mate. We were talking about not worrying about the outcome of your at bat or pitch, being smart. I left them with this bit of wisdom that I think if everybody used this in anything they do, the world would be a lot better and people would be more successful. It comes from Ralph Waldo Emerson – ‘nothing great was ever accomplished without enthusiasm’ so if you have enthusiasm for anything you do, in any job you do, I think you are going to be a success,” said Tabler, who also gave some advise for those looking to find a job outside of playing. “If you want to get into broadcasting it’s a lot of work and there are a lot of outlets out there to get your information from I think you have to have a love for the game and just be around the game. If you want to be a broadcaster and you love the game of baseball, go to the ball park, watch as many games as possible, listen to what the announcers are saying and soak it all in. I was telling the men earlier, when your dream of playing is over, whenever that is, there are so many more things in the game of baseball to be associated with. You could coach, you can be a GM, you can get into the media, you can work in the front office, you can work at the ball park, you can own the team, there are so many things but you have to be around it and love it.”