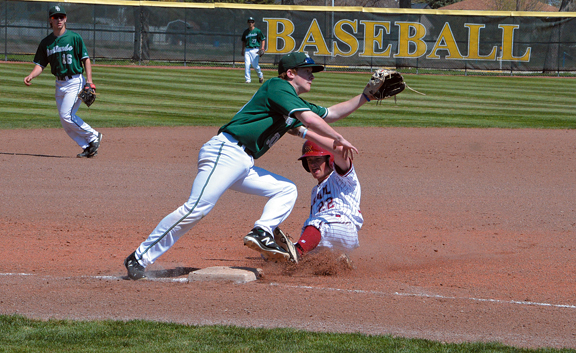 DUST DEVIL: Base runner Cooper Jones slides safely into third base ahead of the tag during weekend play versus Badlands Academy at Jets Stadium. PHOTO BY TREVOR BUSCH

After a rough weekend against Okotoks, the Vauxhall Academy of Baseball Jets bounced back this past weekend.

Taking on Badlands Academy for a doubleheader on Saturday, the Jets would take game one with a final of 9-2.

The second game meanwhile was memorable as it saw Jets pitchers Jade Griffin and Chase Florendine pitch a combined no-hitter.

“It was a good weekend and overall we pitched the ball better than we have, that certainly was a positive. It was topped off by Griff and Chase throwing the no-hitter and Griff was really, really good in that game. That’s a Team Canada pitcher and certainly the way he’s been throwing this spring, it’s not surprising he can throw a no-hitter,” said Jets head coach Les McTavish.

The Great Falls Chargers were in Vauxhall for Mother’s Day for another doubleheader, with the VAB once again taking both games.

The first game against Great Falls was a blowout as the Jets’ bats were on fire and they clubbed nine runs including a Ty Penner solo home run for a 9-0 win.

The final game of the weekend saw Josh Tardif make his first start of the spring.

The big hit of the game came off Damiano Palmegiani’s bat as he hit a two run homer in route to a 4-1 victory.

The weekend wins were a big turn around from the previous weekend where the Jets didn’t see the win column against Okotoks.

“We got swept for the first time in our program’s history and the game’s were closer than (they looked). We lost two in extra innings and the other two were late losses. We just didn’t play well enough, credit to Okotoks they played better than us. This past weekend, we tried to discipline ourselves and pitch the ball a little better with some timely hitting. We did both of those things and we can still swing the bat better than we did last weekend as well as play sounder defence. Overall it was a positive step,” said McTavish.

While the team was successful on the field, a few of them were a part of the graduation ceremony for Vauxhall High School.

With plenty of families in town, the Jets’ staff was happy with how the team focused when they hit the field on Saturday and Sunday.

“It was a tough weekend, this past weekend, between graduation and having all of their families in and all the ceremonies, it’s a lot. They were beat by the end of it but we are proud with how they handled it all the way through,” added McTavish.

As the schedule is coming to a close, the Jets players won’t have much time in between to get rest.

With only two tournaments and the memorial game against the Lethbridge Bulls left in the schedule, the coaching staff is confident the guys will be ready to go.

“We gave them a day off and now we’re back at it. We had a good practice today (Tuesday) and a good practice tomorrow (Wednesday). If you want to play college and professional baseball, that’s what it’s like,” said McTavish. “You have to be able to do it everyday and you have to be able to play when you’re tired and play when you’re sore. Hopefully we’ll build momentum into the home tournament.”

As focus shifts to the home tournament, the VAB also had exciting news regarding a few of their senior players as nine Jets have committed to college for next fall.

Liam Vulcano, Garrett Hawkins and Ty Penner will all be heading west to the University of British Columbia, Martin Vincelli-Simard is joining Midland College Chaps in Texas, Owen Harms is off to Kansas at Colby Community College, Kaiden Cardoso is also joining a Texas school as he committed to Clarendon College, Cooper Jones will be at Southeastern Community College in Iowa, Damiano Palmegiani will be joining California State University and Jaden Griffin will be off to Virginia Commonwealth University.

While nine players are ready to join the college ranks, McTavish expects another one of his players to find a home for the fall fairly quickly.

“It’s exciting, you’ve got nine guys and one of those guys haven’t committed yet and that’s Josh Tardif, he just came off an arm surgery. He’s now healthy and has been throwing the ball really well this spring so we expect him to sign as well. The kids have earned it and that’s why they come to our program. We want to win games certainly but they come to develop individually on and off the field. Our motto has always been ‘better person, better player’ and that bodes well for those nine guys. We’re excited to follow their career and we’ve got former players doing some great things in conference tournaments and some of those things. This will be the next chapter and we look forward to following all 10 guys after graduation.”

As the Jets home tournament presents the players their final opportunity to play in their home stadium, McTavish expects emotions to be high throughout.

Even with that in mind, he hopes the senior players take it all in.

“We challenge them to see what legacy they want to leave and it doesn’t always have to end with a bunch of homers or strikeouts. They came to get a college scholarship, they came for some of those things and now they’re at that point where they’ve fulfilled some of the goals that they’ve set but now it’s about pride and pride about our program,” said McTavish. “Our home tournament is a lot of fun and we just hope that they can continue to build. It’s a long career, you’re 17 years old, some of these guys have been going at it for three years in Vauxhall. There will be some emotion involved as well for eight of them because two are already gone to Team Canada (Jaden Griffin and Martin Vincelli-Simard). For eight of the guys it will be their last game at Jets Stadium so there is some emotions that come into that as well.”

The Jets’ 12th Annual Haven Agencies Home Tournament kicks off on Thursday night with a game against the Lethbridge Elks, first pitch is at 7 p.m.

The VAB’s annual golf tournament goes on Friday at noon at the Vauxhall Golf and Country Club with registration and lunch with a shotgun start following at 1 p.m.