Posted on August 2, 2018 by Vauxhall Advance 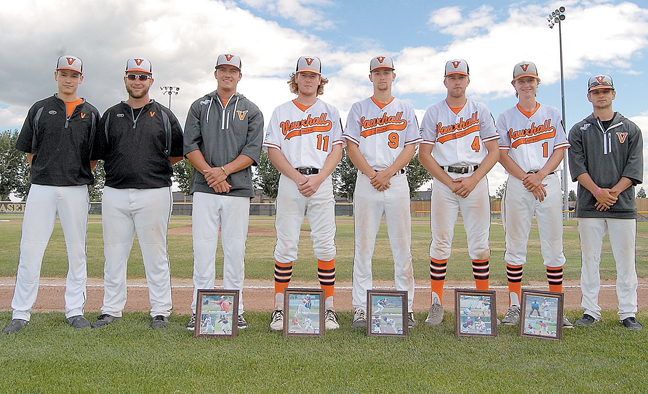 GRADUATION DAY: Districts in Conrad, Montana, saw five Spurs see their American Legion ‘A’ baseball careers come to an end, as players were given a small ceremony of appreciation for their contributions to the baseball program. ADVANCE PHOTO SUBMITTED BY GARRETT SIMMONS

The Vauxhalll Spurs baseball club fell short in its quest to make the State tournament, despite going in as the number one seed for the north district tournament in Conrad, Montana which concluded this past weekend.

The Spurs went 2-2 during the American Legion ‘A’ tournament, running out of gas in the end.

The Spurs did show plenty of juice in its opening game, severely outmatching the Medicine Hat Knights, as the Spurs mercy ruled them 15-0.

“Our seeding put us in a really good position and we took care of business in the first game and came out and played like we should of,” said Connor Parsells, head coach of the Vauxhall Spurs. “We came out in the first inning and put up seven runs and we cruised from there. It was a good way to start the tournament, that’s for sure.”

Unfortunately, it was that one big inning in which the opposition returned the favour that ultimately sunk the Spurs in its next game, a 9-8 loss in extra innings to the Tri-County Cardinals.

“We gave up a six spot in the second inning after being up 1-0. Then we were able to match that and tie the game. After that, it was back and forth from there, and we just couldn’t get the hit when we needed it and they got the hit they needed which ended up being the winner,” said Parsells, adding it was small ball that ended up being the Spurs undoing. “It was a bit of everything. We gave up some free passes and the bunt game really hurt us where they put down some squeeze bunts. Hats off to them for executing their big inning, manufacturing runs.”

The loss meant the Spurs had to play extra games, with hopes of a district championship coming through the back door. The team was able to win its next game against the Great Falls Electrics, 6-3.

“They kept us in check for a little bit, where we won it in the end. But overall, we played well,” said Parsells.

Finally playing on fumes, the Spurs’ district hopes were dashed with a 14-4 loss to the Lethbridge Miners — a team the Spurs had a 3-1 record against in regular season conference play.

“We came out and we were tired. We’ve played a lot of ball games the last two weeks and it showed. They came out to play and they were ready, I think Lethbridge was done conference play a week early and we were still playing the heart of our schedule,” said Parsells. “We were still in a pretty good position for pitching, but you could see the difference in our energy levels and things didn’t fall our way.”

It was a tough-luck loss on an otherwise solid season that saw the Spurs finish first after regular season play and saw them go 24-4 in conference to go along with an up-and-down tournament record.

“This was a great group to be around all summer. We were loaded with talent, it wasn’t the ending we wanted, but looking back on the year, it was a phenomenal year,” said Parsells, adding the team graduates five seniors. “It was a pleasure to be around this group of guys, that’s for sure. We hit the ball probably better than anyone in the district, but we sometimes struggled with our defence. Sometimes it was good, sometimes it was bad.”