Queens prove to be royalty at 2J as well

Posted on November 15, 2018 by Vauxhall Advance 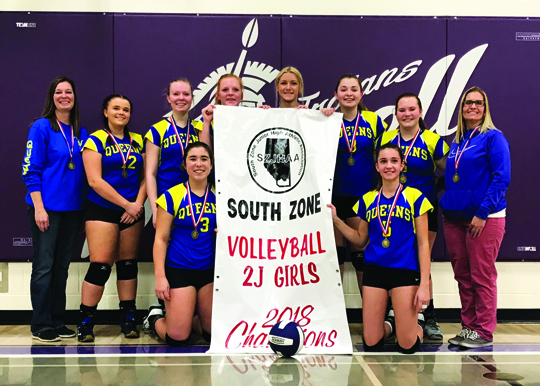 The Vauxhall junior Queens have continued to rule the volleyball courts this season.

To begin November, the Queens won the South Zone 2J girls banner in Barnwell after running through the tournament with an undefeated record.

Even with the team making it look easy, the coaching staff still experienced a few challenges along the way.

The tier one Queens were comprised of five Grade 9 students and three Grade 8 students which lead to a nice mix of players the coaching staff could lean on in any situation.

As with any other team though, the Queens had hurdles to overcome on their way to the 2J zone banner.

While some may have wilted with a shortened bench, the Queens proved to have the physical and mental fortitude needed to win the tournament.

“They were all very strong girls anyway. Mentally I was a little worried because I had to move one of the girls who typically doesn’t play middle to middle and she didn’t want to play middle. She fared well and after she had a few blocks she was more confident of being capable to play that position,” continued Huff. “We had eight girls who got lots of court time.”

Other than a couple injuries to a few players, Huff stated the Queens didn’t have any other major challenges to overcome.

Even with the shortened bench, stamina may have been a challenge but the coaching staff did not sense any fatigue throughout their roster.

With the volleyball season being a short one, team chemistry can always be a factor for teams and can lead to either to great success or failed expectations.

While it took the team a bit of time to gel, by the end, they were as strong as any other team on the court.

“It took a little bit of time for them to get comfortable with each other and trust each other. Once they got onto the rotations, I just kept everything the same so they always knew who was going to be where. They got together and started talking more and really pumping each other up,” added Huff. “They remained positive both on and off the court which was great. They did a lot of team bonding.”