Posted on December 20, 2018 by Vauxhall Advance 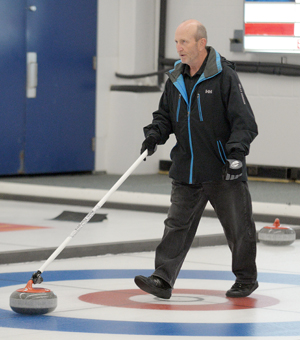 ROCK AND ROLL: D’Arcy Pyne delivers a rock during a stick curling tutorial held at the Taber Curling Club.

It is a new take on curling that is making its way to rinks across North America, and hopes are it takes hold in local areas as well.

Two-person stick curling is gaining prominence in the sport for those who have mobility issues and those who are new to curling and may be a little intimidated by the regular four-man game.

“People have been doing regular curling with sticks for years, but at this point, it has developed into a two-person game. In regular curling, there is still sweeping involved and that is where the mobility or the safety aspect of it can come into play,” said Steve Swarbrick, a member of the Taber Curling Club who is giving tutorials on stick curling every Thursday at the Taber Curling Club. “This is a new game that is separate from regular curling, with a few different rule changes. The biggest elimination is sweeping. It’s a quicker game, it only takes an hour to play. There is no traditional delivery, which can be harder on your joints if you have mobility and flexibility issues.”

Swarbrick noted the biggest stigma to overcome from the curling purists is that stick curling it’s not ‘real’ curling.

“I’ll admit, even I felt that way in the past. But, it’s its own game. You still have your delivery, it’s still affected by your mechanical movements, you still have to have consistency like your regular curling,” said Swarbrick. “It is just more manageable for people who may have flexibility issues or want to try curling for the first time. There are changes in strategy, where it’s not like your regular curling.”

In stick curling, each team is comprised of two players. One member of each teams stays at each end of the rink, and must not cross center ice. The two delivering curlers alternately deliver six stones each per end, while their teammates skip that end, then the roles are reversed. All games are six ends. Each stone must be delivered with a curling or delivery stick, from a standing or sitting (wheelchair) position.

“It’s similar to a shuffle board process where you stay at one end,” said Swarbrick. “There is no transfer from end to end. You stay at the same end for the entire game. Both members of the team are doing something with every shot.”

There is the three-guard zone in regular curling, where you can’t remove rocks from a guard placement in the front of the house for a certain amount of stones. For stick curling, the first three stones delivered in an end may not be removed from play before delivery of the fourth stone of that end. If that happens, the delivered stone is removed from play and all other stones are returned to their original position.

“That means you can draw right into the button and they can’t take it out of play. They can do something like bump it to the back. That is a strategy that is not in regular curling,” said Swarbrick. “It’s catching on in other parts of the province. There are leagues forming in other towns.”

For now, Taber Curling Club is trying to drum up interest in the sport. If people want to try out stick curling, they can practice throwing rocks on Thursdays from 6-7 p.m. and then have some games at 7 p.m.

“We do now have people coming down wanting to play, and others wanting to learn,” said Swarbrick. “We want to help teach people so they feel comfortable enough to play some games. Hopefully it catches on and everything has been positive so far. It’s opened people’s eyes for a different game of curling. Everyone who has tried has liked it and enjoyed it.”

Numbers in curling clubs have been struggling across the province, where hopes are games like stick curling can reinvigorate interest.

At this point, there is no fee involved, just clean shoes are required. Sticks will be provided.

“This is introductory. If someone is really interested, we will encourage them to buy their own stuff down the line,” said Swarbrick.“I’d just like to remove the stigma. It’s a game for everyone.”

If you would like to learn more, you can e-mail steve.swarbrick2018@gmail.com.