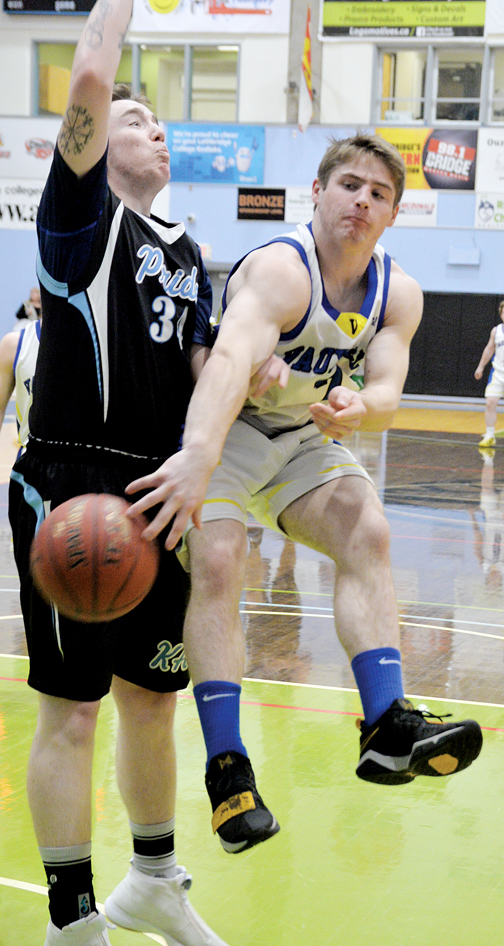 PASSED OUT: Max Grant of the Vauxhall Vikings basketball team passes under the basket during opening-round play of 2A South Zone competition against Kate Andrews Pride last week. ADVANCE PHOTO BY GREG PRICE

Despite the Vauxhall Vikings boys basketball team’s shooting woes, there was still a silver lining to its 2A South Zone run at Lethbridge College last week.

The third-ranked Vikings made it all the way to the gold-medal final, before falling to top-tanked Immanuel Christian Eagles 88-71 on Saturday, in a contest where shots were just not falling from the outside.

“Not being able to hit a three-pointer was the story for basically our whole zone tournament,” said Daryl Johnson.

“In our final game, we went 2-for-28 for threes. Our first round game against Kate Andrews — same story. We hit two against them and two against Claresholm (in the semis). It just wasn’t enough in the final. We got through our first two round games by good defence and working it down low. But in that final game, you need to hit at least five to take the pressure off, but we couldn’t convert. The game plan was good, we did what we wanted to knowing what they were running and we were ready for it. But when you aren’t shooting well, it’s tough to overcome.”

Maddux Mateychuk poured in 21 points for the Vikings, who also got 20 points from Carlin Dick. John Vulcano chipped in 18 points.

“We were still scoring our points inside, but there has to be balance to keep momentum. We’d get on a run, miss a couple of threes and they would go down and score a lay-up. It’s hard to continually work from a hole and have a one-dimensional game to gain momentum,” said Johnson. “It was close until pretty late. We were down by five in the fourth.”

The Vikings did manage a 10-point victory over the higher-ranked Willow Creek Cobras on Friday, in a 73-63 victory.

“Our defence was really good. They have two really strong players, with one who can hit from anywhere outside and another big guy who is 6-foot-5 and a good post player. We held both of them off the scoresheet in the first quarter and combined they had 28 points in the end. We will take that any day of the week,” sad Johnson.

Vikings kicked off its zone run last Tuesday at Lethbridge College with a plodding 66-57 win over Kate Andrews, a team in the past they handled easily with big double-digit victories.

Dick had 19 points in the win and Ty Wevers hit for 13 points. Reece Keller added 10 points.

“I thought our shooting would come. It wasn’t great in practice and then you get through two games without shooting any good really from outside, and you just hope by the time you get to the third game of your tournament that it will work itself out,” said Johnson. “But, it just wasn’t there.”

What was there was a very solid season overall for the Vikings which concluded with its silver zone medal.

“It was a very good season for the kids who were very dedicated and loved to get out there. I don’t think we had any games where we weren’t in the game,” said Johnson. “You were hoping for a better results in our final game, but there is no doubt the boys should be proud of this season.”