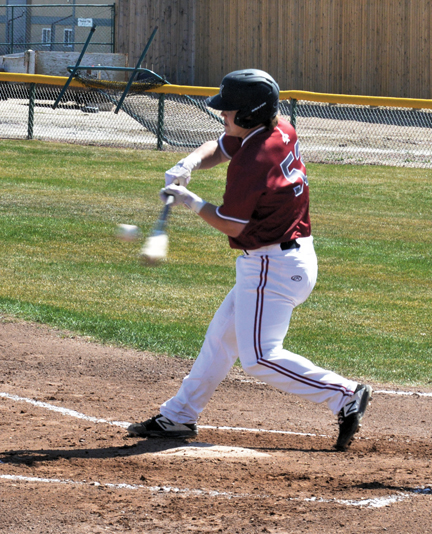 PITCH AND HIT: Carlin Dick wraps an RBI single as part of a four-run first inning offensive uprising. Dick would end up finishing the contest going 2-for-3 with three RBI as the start of a doubleheader sweep for the Vauxhall Jets.

There was no place like home for the Vauxhall Academy of Baseball Jets as they opened up its home schedule on the Easter weekend with a doubleheader sweep of the University of Calgary junior varsity Dinos.

On Sunday, the Jets started off it doubleheader by jumping all over the Dinos starting pitcher in the first inning, and never looked back on the way to a dominant 14-1 victory.
Thomas Little started on the mound, going 3 1/3 innings, allowing no hits to go with four walks and three strikeouts. Tyler Boudreau finished things off going 1 2/3 innings, allowing one hit, and one unearned run, with three walks and two strikeouts.

Game 2 was much tighter, with a good and crafty LHP on the hill for the Dinos, but the Jets still emerged victorious 5-3.

Levi Abbott started on the mound, going three innings, allowing three hits, one earned run earned run, and struck out four. Maddux Mateychuk went one inning, allowing one hit and one unearned run. John Vulcano threw one inning with one walk and one strikeout. Evan O’Toole finished things off for the save, going two innings, allowing two walks and striking out three.

Offensively, the Jets were led by Logan Domanski, who was 1-for-3. Max Grant was 1-for-3 with a double and to RBI. Carlin Dick was 1-for-2 with two RBI. Jackson Clemett was 2-for-3 with an RBI. Logan Grant rounded out the offence, going 1-for-3.

The Jets will be competing at the PBA Tournament in Lethbridge starting on Friday.