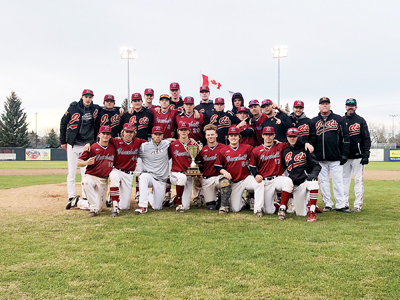 Vauxhall Academy of Baseball Jets head into a home doubleheader with plenty of momentum, having won the PBA Showcase for the fourth-straight year over the weekend in Lethbridge.

“I thought it was a pretty good weekend. I was a little concerned weather wise in getting things going and we were curious to see how the guys would respond playing against some teams we see quite often,” said Les McTavish, head coach of the Vauxhall Academy of Baseball Jets in comparison to some tournaments the team plays State side. “We pitched well and we were able to get in some other players into games and got them some more at bats and some more confidence, and they were exceptional. It was challenging at times with the weather, but the guys didn’t complain and they played hard.”

The championship win did not come easily, as the Jets were locked into a pitcher’s duel in the final where the jet engine was just enough in a 1-0 victory over the PBA JV Dawgs. The Jets scored its lone run in the first inning.

“That was a heck of a final game and it didn’t come easy. PBA has a really good group this year. This is the best group I’ve seen them have in a number of years,” said McTavish.

Levi Abbott went the distance on the mound, tossing a complete game one-hitter. He struck out five and walked one.

In a game where hits were hard to come by, John Vulcano was 2-for-3. Shayne Campbell and Evan O’Toole were each 1-for-3. Jackson Clemett had the eventual game winning sacrifice fly in the first inning.

Earlier in the day, the Jets blanked Calgary Babe Ruth 10-0.

The Jets outhit Calgary 10-1 in the mercy-rule shortened game. Adam Macko started on the mound, going two innings with three strikeouts and one walk. Reece Keller finished things off, going three innings and allowing one hit with one walk and four strikeouts.

The Jets solid tournament run in which the squad went undefeated, included an 8-0 blanking and a first-day of competition that featured 10-1 win over Calgary Junior Dinos and the same tough PBA JV team in a tight 3-1 win.

The PBA game featured Matt Wiggins starting on the mound in another pitcher’s duel, earning the victory, going five innings. He allowed two hits, one unearned run and a walk to go with five strikeouts. Evan O’Toole earned the save, going two innings, allowing nary a hit to go with four strikeouts. Offensively, the Jets were led by John Vulcano who was 1-for-3. Logan Domanski was 2-for-3. Shayne Campbell was 1-for-2. Jackson Clemett was 2- for-3 with an RBI. Carlin Dick rounded out the offence, going 1-for-3.

“As a group, we are a development program, and we want to make sure when we are developing kids, they are playing. We had a lot of different players step up this weekend in Lethbridge who maybe didn’t step up in Vegas or Kamloops (tournaments). Hopefully, that carries forward,” said McTavish.

The Jets now return home to the friendly confines of its home park in Vauxhall for a scheduled doubleheader against Okotoks Dawgs on Saturday, with games scheduled for noon and 2:30 p.m., weather permitting.

“We’ve continued to get better. The players are realizing it’s a tough game and every week you go to continue to grow and get better. There are some weekends where it’s going to go really good and you have to maintain that process with the work ethic and the attitude. Whether you hit .500 or went 0-for-20, you still got to get back to work and every week starts with good work and good practice habits,” said McTavish.