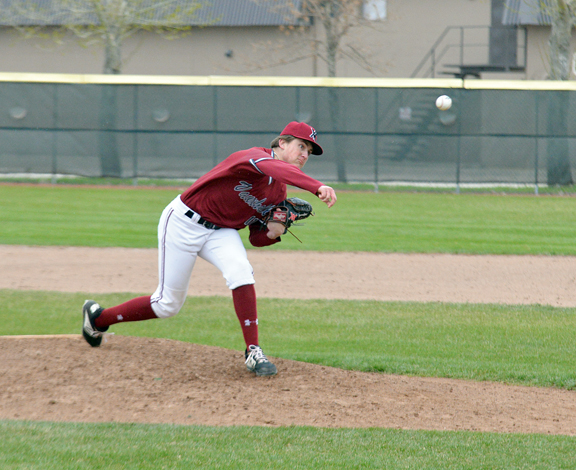 RELIEF ARM: Pitcher Chase Florendine of the VAB Jets hurls one in during doubleheader action versus the Okotoks Dawgs on Saturday. ADVANCE PHOTO BY TREVOR BUSCH

Vauxhall Academy of Baseball Jets split its home doubleheader at Jets Stadium over the weekend against the Okotoks Dawgs, as the squad battled the elements just as much as the opposition in a cold and blustery day.

Both games ended in dramatic fashion as the Jets lost in extras in Game 1 8-5 and walked off for a 4-3 victory in Game 2.

Offensively, the Jets were led by John Vulcano who was 2-for-4. Dayton Peters was 2-for-4. Max Grant was 2-for-3 with a double. Shayne Campbell was 1-for-4 with a double and an RBI. Carlin Dick rounded out the offence, going 1-for-3.

Offensively, the Jets were led by Dayton Peters, who was 1-for-4 with a double and two RBI. Shayne Campbell was 1-for-3. Ty Wevers was 1-for-3 with a double. Josh Malainey was also 1-for-3.

The Jets host the Great Falls Chargers on Saturday at Jets Stadium for a doubleheader, with games at 1 and 3:30 p.m. The team also hosts Badlands Academy on Sunday, with games at 12 and 2:30 p.m. Haven Agencies Invitational Tournament goes May 16-19.