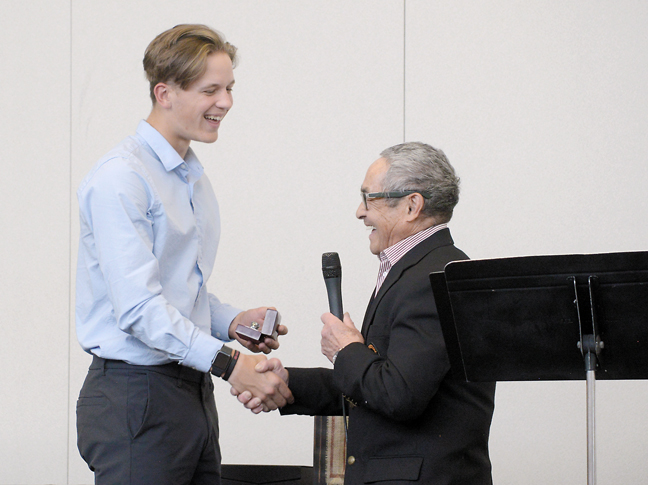 RING OF HONOUR: Adam Macko of the Vauxhall Academy of Baseball Jets is appreciative of the ring he received from Yukio Kitagawa for being the winner of the Reno Lizzi Scholarship for the 2018/2019 season as part of the Celebration of Achievement awards gala at Vauxhall High School early last week. ADVANCE PHOTO BY GREG PRICE

The Vauxhall Academy of Baseball Jets were front and centre last week, as its program officially wrapped up for the year with the annual Celebration of Achievement at Vauxhall High School.

Highlights included the academy giving a special commemorative statue and certificate to Yukio and Barbara Kitagawa in recognition of their Pennies for Ks campaign, where the continued cycling program has raised over $225,000 for the VAB.

“That will be one day that I never forget. If you look back in your lives, you will have moments in your life that you will never forget that are seared into your memory.
Watching Yukio reach that 100,000 kilometres on his 82nd birthday, that I am so grateful to have seared into my memory,” said Todd Ojala, president of the board of directors for the VAB. “It was great to see the boys waiting for him by the fire department there by the local gas co-op and ran the last kilometre of the journey with Yukio cycling in the end.”

In his acceptance speech and words of wisdom, Kitagawa highlighted exactly how much excellence was in the room, noting the Jets, who had its best record in program history, and the Vauxhall Queens girls volleyball team who were guests of honour and had its own season to remember.

“It just so happened in 2018/2019, players of their respective teams, Vauxhall Jets and volleyball Queens turned in stellar performances, given both teams had their best season ever,” said Kitagawa.

The Jets won the Bishop Gorman Desert Classic in Las Vegas for the first time in the program’s 13-year history on the way to a program best 35-5-2 record.

The Queens won 11 straight tournaments on the way to a 73-match win streak and zone and provincial titles, against some teams saturated with Team Canada and Team Alberta players.

“Clearly, both teams deserve the gold category, the greatest of all time,” said Kitagawa.

Ranked as one of the top two pitchers in Canada, Adam Macko was recognized multiple times with awards in the Celebration of Achievement, along with being recognized by Major League Baseball.

Macko, from Stony Plain, was drafted in the 7th round, 216th overall by the Seattle Mariners in this year’s draft.

The three-year standout for the Jets also participated in the 2019 P15 New Balance International Series for the World Team as well as the Area Code Games.

Macko signed a Letter of Intent to Purdue University.

Macko received the Inch by Inch and Kalvin Odland Memorial Award, along with the Reno Lizzi Scholarship for the 2018/2019 season.

“This player has been here for the last three years and while Inch by Inch at times, but it seems with how quickly the time has flown, it was mile by mile. This young man has come a long way and we have talked about him a lot tonight. We appreciate your leadership and what you do day in and day out, because believe it or not, it rubs off on your teammates and us as coaches,” said Joel Blake, an assistant coach with the Jets before awarding the Inch by Inch accolade to Macko.

Also a first in program history was having a player on the Jets practice squad be the valedictorian in Brady Howg, who also swept many categories during Vauxhall High School’s athletic awards.

“He won a baseball award, a golf award, a curling award, an academic athletic award and Male Athlete of the Year. Hats off to Brady,” said Les McTavish, head coach of the Vauxhall Academy of Baseball Jets.

Knocking on wood not to jinx anything, McTavish noted the Jets were able to enjoy a baseball year where no major injuries occurred to any of its players.
“We were fortunate enough that we had 22 guys start the season and we had 22 guys ready to play at the end of the season and we ended up 35-5-2 which is the best record we have ever had,” said McTavish. “We’ve had some pretty good programs over the years with some really good players come through this program. We tell the guys we’ll provide the vehicle, their job is to drive it and maintain it and figure out how to make it better. It sounds like a cliché, but it’s the truth. It speaks volumes to the 22 guys we have here where we got the best record we’ve ever had. We had some great memories as a group. I know you will look back on your time in Vauxhall, and these will be some of the best friendships you have in your life.”

Thomas Little was drafted in the 33rd round, 990th overall by the Philadelphia Phillies. Little has signed a Letter of Intent to NJCAA Division 2 National Champs Oklahoma Enid Jets.