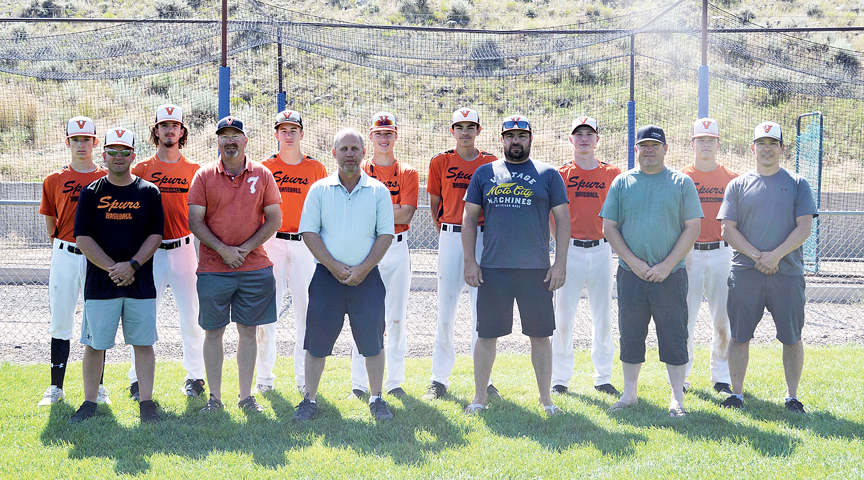 GENERATIONAL TALENTS: There were plenty of family connections to the tradition of Spurs baseball for the 2019 season. ADVANCE PHOTO SUBMITTED BY LORALEI FUJITA

As proud fathers Ryan Fujita and Kim Howg saw the Vauxhall Spurs storm onto the field in victory after closing out the Bitterroot Bucs in the championship final of State in Florence, Montana, it was an extreme feeling of deja vu.

They watched Kole Fujita (catcher) and Brady Howg (No. 1 pitcher) pull off the same feat they did when they played in 1990, earning State against the exact same baseball organization in the Bitterroot Bucs. Howg still had his 90s’ Spurs jersey which he hung in the 2019 version of the Spurs’ dugout for good luck at State.

“The cool thing about that was Brady was the pitcher (in the championship game) and Kole was the catcher, and we had that old Spurs jersey from 1990 hanging up in the dugout all week,” said Dru Sebastian, head coach of the Vauxhall Spurs.

The Spurs looked like they had the team to make deep runs the previous two years, but were upset in the process at districts, where Kim thought perhaps his son would not even get to share in the State experience.

The 2019 State championship did give Kim numerous flashbacks to his playing days, where he saw several similarities with the 1990 version of the Vauxhall Spurs —starting with the man at the helm.

“There’s actually a lot of similarities this year (to 1990). Sea Bass (Sebastian), the coach, he coaches a lot like our coach did back then, Greg Kuntz. It was all hustle on and off the diamond between innings,” said Howg. “Our old coach always preached good defence. If we played good defence and threw strikes, we would win games.”

A good spread of first to third-year players on the 2019 version of the Spurs, Howg had a good feeling the team good make strong runs at districts and State, but did not want to get his hopes up with how the last couple of seasons panned out.

“The kids bought into the system, and especially these last two weeks (districts and State),” said Howg, adding some wisdom he learned from his coach, he tried to share with his son Brady in being a solid presence on the mound.

“Kuntz used to say the best pitch is a change up. When Brady was 11 or 12, I showed him how to throw a change up, and when he throws his, he has success.”

That success bore itself out in the State championship last month with his son Brady, earning two wins on the mound and only surrendering only two earned runs over 12 2/3rds innings.

Kim played right field in his playing days and hit in the No. 2 spot in the order, and talked with some of the Bitterroot fans at State to see if there were some that were around back in 1990. But one difference between the two experiences is Bitterroot had the lone team in 1990, situated out of Hamilton, Montana. When they switched to two teams, the team in Hamilton is the Bitterroot Red Sox with the team in Florence being the Bitterroot Bucs.

“The coach from two years ago from the Bitterroot Red Sox is the shortstop we played against in 1990,” said Howg.

Another difference Fujita recalled was the fate of the coin toss. His son’s team has lost every single coin toss in its first four games to be visitors, only to have its luck reversed when they needed it most in the final.

“I’m not sure if Dru ended up deferring the coin toss to the other side on the last day, but when I found out we were home team, I got a really good vibe,” said Fujita, adding the Spurs were able to snuff out a first inning uprising where Bitterroot had two on with nobody out in the top of the first inning, but were unable to push a run across, and his son Kole started off their part of the inning with a leadoff double. “In 1990, we came out on the top side (visitor). Bitterroot came out on the ‘B’ side so they had to beat us twice and they did the first game so it was an all or nothing. They were beating us at first but then they started running out of arms and we ran away with it — games back then were nine innings.”

Ryan’s son Kole played catcher or second base for the Spurs this season, mimicking his father who manned second base back on the 1990 State team.

“You go down there and you remember how Bitterroot was a big rival of yours back in the day, but then when you finally go to their ballpark, they were a really good host and treated us really well. Some of those bitter rivalry memories of mine got put to the back burner,” said Ryan, adding with his son’s Spurs being able to jump up early on the Bucs 9-0 after two innings also helped lighten the competitive juices.

As Kim Howg continues to bask in the nostalgia of his state championship along with that of his son’s, he noted if he could turn back the clock, he’d just keep playing Spurs baseball.

Ryan Fujita played for the Spurs in the 1988, 1989 and 1990 seasons and were the first Canadian team to win the Montana State ‘A’ championship according to him.

“To see Kole go to State and regionals, it was a special feeling. The only thing that would have made it better is if Kaden (Kole’s older brother) was an assistant coach again this year and he could have been a part of it, but he’s busy this summer,” said Fujita. “The Spurs was a part of my upbringing. Sports molds you into the person you are and your teammates. I was fortunate enough to do that in both baseball and hockey and the same for Kole. It’s hard to put into words seeing your kid have the same success you had as a player going through the organization as a Spur. I take great pride being a former Spur and that’s the pride we try and keep as we run the organization.”

Ryan Fujita is not only a former player, but also current president of the organization.

“We want a philosophy of putting our best foot forward and make it most enjoyable for the kids and most memorable,” said Fujita. “We have a really good bunch of kids who put a lot of time and effort into this season and have earned everything they’ve got. We have a very good parent group that all understand and are all pulling in the same direction wishing the kids the best.

While there is a direct father/son connection as players towards the family bond as State champions, many players on the 2019 Spurs have carried on the proud ‘A’ Montana baseball bloodline with numerous alumni having donned the jersey in the past.

“I think this is the most family alumni we’ve ever had on the team at once,” said Howg. “It shows once you are a Spur, you are always a Spur.”