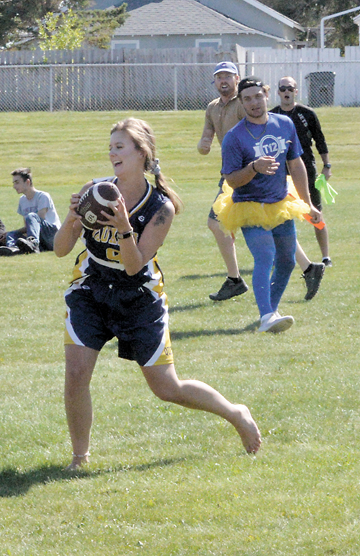 In all the years I have been at The Vauxhall Advance, I have never seen Vauxhall High School’s Grade 12 class beat the teacher/community team in the annual Blue Cup flag football game — and for the life of me, I can’t figure out why the Grade 12s have been unable to break into the win column.

Doing some further digging into the Blue Cup game previous to my time in the community, no long-standing teacher or community member can recall the Grade 12 class ever winning a Blue Cup match outright in its history.

On the girls side, you have extremely athletic players from the volleyball program that is always a 2A provincial threat, year in and year out, along with athletes with the basketball team.

Athletes as far as the eye can see, and even those who do not play sports, have the advantage of being in better shape simply from their youth compared to the teacher/community side.

I know this, because I have participated in some Blue Cups in the past, and looking at my physique in the mirror, one wonders if, at the very least, I’d giggle if you poked me in the belly region.

There I was with camera bag in hand, ready to cover Blue Cup 2019, when the pleas were already coming from the ‘wounded’ teacher side to see if I could play. But having only my work clothes that featured jeans and dress shoes, I declined the offer.

Aches, pains, and tears had the teachers either having key players missing completely from action or operating at less than 100 per cent, which even at 100 per cent, shouldn’t be enough to beat the kids.

And yet they do —year after year, with the odd tie sprinkled in like this year in an eventual 6-6 draw.

After viewing game play for enough years, and having previously coached football for 14 years, I’m pulling a Joe Namath and guaranteeing a victory for the kids in 2020 — all I need is a week’s worth of practices to whip the playbook into shape. I bet I could even guarantee a win for this year’s team if there were to be a rematch — Blue Cup II — Seniors Revenge.

Case in point, the very start of the Blue Cup game, I was under the impression I was going to be witnessing history with the students running away with the flag-football game, marching down the field with impunity in its first possession.

The teachers were on their heels with quick strike after quick strike, until the Grade 12 team had a first-and-goal at the three-yard line. But yet, despite having thoroughbreds throughout the line up that could have simply galloped into the endzone on a run play with minimal blocking, especially handy with the awkwardness of trying to rip flags to make a tackle in the format that would likely give a runner an extra yard or two, the Grade 12 team decided to go out of the shotgun and force passes deep into the endzone. Three straight incompletions later and the teacher team made an impressive defensive stand, sitting back in a zone with less field needing to be covered.

I get it, people who have never played organized football before or watched the game don’t know what a proper pass route is in say a slant, post, flag, fly, square in, square out, wheel, curl, go, out and up etc. But even teaching some of the most basic ones in a cursory way with its footwork could lead to less congestion among players where sandlot luck comes into effect where one is simply throwing it up for grabs. Focusing on one or two players and their routes in isolation have a greater chance for success. Especially if you’re matching up a speedster against someone where middle age has added some extra aches and pains. Knowing where a pass route is going allows the quarterback to throw where the receiver is expected to be, and not where they currently are.

Even just a few basic trick plays that look like runs or passes on the surface could be fun for the kids, where the pupils become the teachers in how badly they’ve burned the opposition.

Another thing I’ve noticed among the quarterbacks on both teams that makes things easier to defend is the dreaded ‘tunnel vision’, something still afflicted by flag football’s NFL brethren with the game at the highest levels.

It’s understandable and natural for a right-handed quarterback to not look to the left side of the field, as it’s harder to throw across your body, even for rocket-armed NFLers. But, the tell makes the field much easier to defend, either by forcing the quarterback to scramble to their left with the pressure a team gives, or putting your best defenders in the area you are finding the quarterback constantly throwing to.

Case in point: Teacher team’s rocket-armed quarterback Les McTavish, who has been a fantastic pitcher in his own right as he continues to be the man at the helm of the Vauxhall Academy of Baseball Jets. I can’t remember exactly who the teacher was, but there was one time late in the game, where there was not a Grade 12 defender within 10 yards of the person who was streaking to the endzone. A simple scan to the left side and that’s the easiest TD ever, as the teacher could have camped out and ate a sandwich before making their touchdown grab. Another was where McTavish threw a pick to the left side, not being able to get as much mustard on the ball as he can throwing to the right side.

For the layperson who has never touched a football before in their lives, the above paragraphs can seem daunting and overly complicated, but one would only need a handful of practices to script a half-dozen plays (one does not need a War and Peace long playbook for a friendly game of flag football that lasts about an hour), and basic defensive strategies.

Some basic scripted plays, proper footwork on routes, maybe a short blocking tutorial thrown in for good measure and strategy (you don’t need to score a touchdown on every throw, you simply need to get a first down for a fresh set of downs), and I bet I could help the students end their decades long streak of futility for the coveted Blue Cup, or at the very least, give them a better fighting chance.

Or serving as a mercenary, I could give my coaching skills to the teacher team to try and ensure victory. I could see some of the competitive juices flowing among some over the years, where ties must feel like kissing your sister.

Either or, for the Blue Cup, the opposing team would certainly be singing the blues in the tongue-in-cheek Joe Namath guarantee.

Even if the boasting doesn’t result in the desired affect of a victory (where an eating crow column were to follow), students or teachers could at the very least get a greater rudimentary understanding of the game.

And a great game it is. The draw for me has always been it is a sport where it doesn’t matter what the body type or skill level is, there’s a spot for everyone on the field to meaningfully contribute, be it on the defensive or offensive lines, skill positions or special teams.

Football is not where one player can dominate alone, many parts have to be working together to achieve team success.