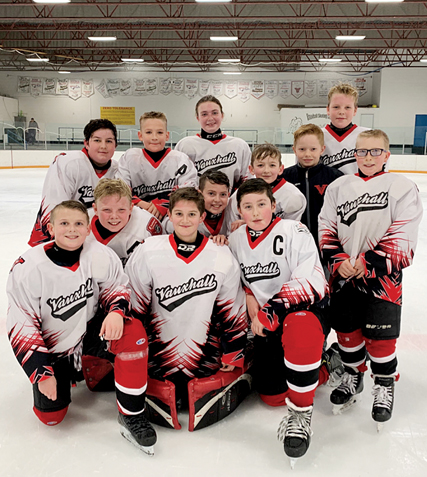 Vauxhall peewee Sabres had that winning feeling this past weekend, with two victories in minor hockey play.

The team traveled to Black Diamond and beat High Country 3-1 on Friday night.

Greyden Pedersen tallied twice and Landon McEwen had a single.

The Sabres battled Nanton at the Vauxhall Arena on Saturday and came away with a 6-4 victory. Greyden Pedersen had the hat trick and Daxten Pedersen, Kyland Odland, and Austan Axelson had singles.

“We’re doing good. We’ve only had one loss since the regular season when tiering started,” said Jared Odland, an assistant coach with the Vauxhall peewee Sabres hockey team. “They’ve all been close games pretty much, by one or two goals usually.”

The Sabres have been piling up wins despite needing to be a combined team to make a roster, with plenty of youth on it for the competition level.

“The Sabres are doing well. They are growing lots being a young team. Being a peewee team, we were short on numbers in Vauxhall which is something we always struggle with. We have four atom-aged kids playing on this team,” said Odland. “With them on there, we are a young team. We only have two kids who have played peewee previously. That being said, we are doing good and learning lots.”

The Sabres are off to an outdoor rink tournament in Kalispell this weekend.

“The kids are looking forward to it. I’ve heard that if it gets a lot of snow, they switch from a puck to a ball. So we were practising with a ball (Tuesday) night in case that happens. The forecast is showing we may see some snow over there,” said Odland. “There’s a few different rules as far as offsides and icings and things. It’ll be a good experience for them. Our first game is Friday night, so I imagine it’ll be under the lights. It should be good times.”

The team’s next home game is not until Jan. 12, against Redcliff.