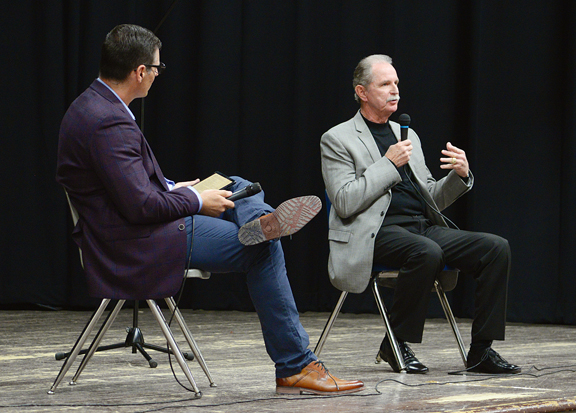 WORDS OF WISDOM: Rance Mulliniks (right) shared some of his MLB stories as a 16-year veteran to the packed crowd at the 14th Annual Vauxhall Academy of Baseball Awards Night. ADVANCE PHOTO BY TREVOR BUSCH

With the recent swing of warm weather, it’s beginning to look more and more like baseball season.

It certainly felt like a good kick-off to baseball season on Feb. 28 at the Vauxhall Community Hall where VAB welcomed Rance Mulliniks to town for their 14th Annual Awards Night as the featured speaker.

Born in Tulare, California on Jan. 15, 1956, Mulliniks had a 16-year career in Major League Baseball, including 10 seasons with the Toronto Blue Jays.

Mulliniks made his major league debut in 1977 with the California Angels and was traded to the Kansas City Royals in 1979 where he spent two seasons before being shipped to Toronto in 1982. While his career was in a bit of a plateau with the Royals, Mulliniks found his groove in Toronto where he eventually went on to win his first and only World Series trophy in 1992.

“What really made it unique is here in Canada, you represent an entire country. It’s not like back home, I see a lot of Giant games, but if you go down to LA, there aren’t many Giant fans down there. In Canada, it is completely different. I remember when we became a really competitive team and ultimately won a championship, the fans throughout all of Canada follow the Jays and give tremendous support. It was an exciting time,” explained Mulliniks about the 1992 World Series.

Before getting to experience every baseball player’s dream, Mulliniks explained that plenty of work went into reaching the big leagues. Along the way, he had two major influences during his baseball career that helped propel him to the MLB.

“The two biggest influences in my life, number one would have been my dad. My father started throwing batting practise to me when I was seven years old and of course, dedicated his time to help me chase my dream. On the professional side, it would be (former Blue Jays manager) Cito Gaston. I can honestly say I wouldn’t have had the career I did as a Blue Jay if not for Cito Gaston.”

From a young age, Mulliniks had a bat in his hands and his father helped form a batting approach that stuck with him for his entire career.

“There were only two things my dad ever stressed with me and he never talked about mechanics, and I mean never. All he ever did when he would throw to me was he would make me hit the ball up the middle and to the opposite field with authority. He would insist on that. If I pulled the ball a couple of times he would make me get back to the middle and opposite field. He would also insist that I always swung at a strike. If he threw a pitch that was a ball and I swung, he would tell me. If I took a strike he would tell me ‘that’s a pretty good pitch, get on it.’ I think what my dad knew instinctively, and I didn’t know what he was doing, but he knew if I could hit the ball up the middle and to the opposite field, my mechanics would be in the proper place.”

Similarly, Gaston also had a big impact on how Mulliniks felt when he stepped into the batter’s box upon arriving in Toronto.

“The way Cito taught (hitting) was, and of course he could dress the technical and physical side of it, but what he really tried to stress was having the proper mental approach to hitting. We were a bunch of young players and I was still learning as well, but he would say ‘there are certain situations against major league pitchers where they are going to try to make you hit something other than a fastball.’ That was hard for me in particular because I had never been taught that. What he was, in essence, asking me to do was to change the way I approached hitting from a mental standpoint,” said Mulliniks. “The first year in Toronto I hit .244 and I really struggled with that. The next year in 1983, I got off to a pretty good start.”

Being from California, Mulliniks wasn’t entirely sure of what to expect when getting traded to Toronto.

While he had played there during his career already, living and playing in Canada was a different experience but one which he was more than satisfied with when looking back.

“First of all, I was happy about the trade because I requested it and it happened with about nine days left in Spring Training in 1982. Obviously, I had played in Toronto because I had been in the big leagues for four years. I just remember when we got to Toronto from Florida how cold it was. The second game we played in Toronto that year (at Exhibition Stadium), we had snow flurries. The experiences I had in Toronto were wonderful and a lot of fun. I got to be a Blue Jay when they were pretty good so no regrets.”

Along with the change of location, he also experienced a shift of positions in the infield from shortstop to third.

“When I got to Kansas City they were already set (at shortstop) so I sat there for two years. I had 98 at-bats in two years so coming to the Blue Jays gave me an opportunity to play again and to have a career. The reason I ended up moving to third base was because of the injury, when I finally got well, I had lost quite a bit of speed. So I didn’t have the range to play shortstop at the major league level anymore and the Blue Jays needed a third baseman.”

“It’s quite an advantage for a pinch hitter in the sense that when I get to the ballpark and I’m not in the lineup that day, I know there’s a pretty good chance I’ll pinch-hit later in the game. I know who I’m going to face out of the bullpen, it’s either going to be an eighth-inning or ninth inning guy so you can start to prepare for that. Usually, three hours before game time I had made up my mind on what I was going to hit based on who was coming out of the bullpen. There was a lot of decisiveness. Once I got into the batter’s box, I already knew what I was going to try to do. I think where hitters get into trouble is they start to have some doubt and they aren’t as prepared as they should be.”

Being in Toronto for 10 seasons led to Mulliniks playing with some Blue Jay greats including Robbie Alomar, Dave Stieb and Joe Carter.

“He was phenomenal. Dave Stieb, aside from Nolan Ryan who I played with in California, had the best stuff of any starter that I’ve ever played with. It was electric,” said Mulliniks of Stieb. “The best all-around player was Robbie Alomar, there’s no question about that. There wasn’t anything Robbie couldn’t do on a baseball field. He was the best defensive second baseman in baseball for probably 12 years, maybe even 14 because he was able to maintain his skills for a long time.”

The 1992 season saw Alomar and Carter traded to Toronto from San Diego for Tony Fernandez and Fred McGriff which in part led to their first World Series championship.

“Both of those players were pretty significant in those back to back World Series wins but we gave away two outstanding players, one who I think should be in the Hall of Fame in Fred McGriff,” said Mulliniks. “It seemed to stabilize and solidify things. When we got Robbie and he went to second base, it changed us defensively on the infield. What Joe Carter brought to us was a legitimate, big-time 100 RBI guy year in, year out.”

As far as pitchers Mulliniks hated facing, one name came to mind.

“Nobody ever asks who I hit good against, it’s always who did I do bad against,” said Mulliniks to a round of laughter from the audience. “Tom Seaver, I couldn’t touch Tom. If I looked fastball, he threw a slider. If I looked slider, he threw a fastball. If I hit a ball good off of him, an umpire dove and caught it.”

On the other hand, Mulliniks knew he was going to have a good day when Don Sutton was on the mound.

“It was Don Sutton and I was 14 or 15 for 24 against him with a couple of home runs. He was actually the one who told me that. From that point on, when they came in to play us, and he was going to pitch, I sent a limo to the hotel to make sure he got to the ballpark.”