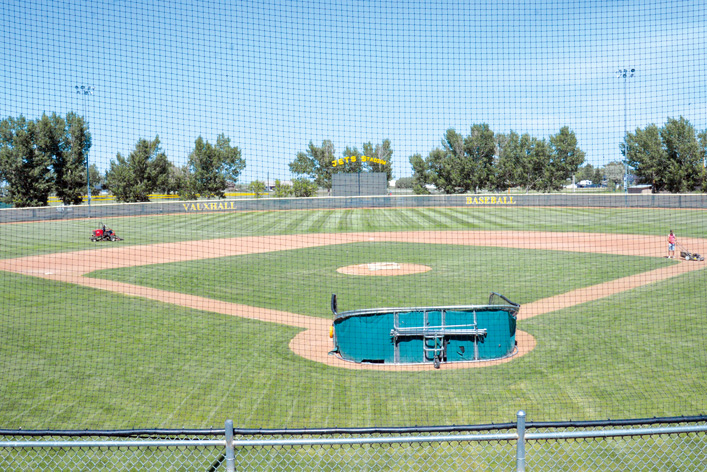 LIKE NEW: While the spring season saw an unfortunate cancellation for the Vauxhall Jets, it wasn’t all bad news as the time off the field allowed for some upgrades to be made at Jets Stadium which included a new sprinkler system, a new drainage system, and a new pump system among other projects currently ongoing at the field. ADVANCE PHOTO BY COLE PARKINSON.

While no one wanted to see a cancelled spring season for the Vauxhall Jets, it wasn’t all bad news for the academy.

Due to the COVID-19 pandemic, the Jets saw their season cancelled before it began but with no players on the field, it allowed the group to get to work on some needed upgrades.

“We’re just finishing up the last project but originally, as soon as COVID hit, we, the Jets Stadium Society which is made up of a whole bunch of people, decided that it was a good time to upgrade the playing surface. You need about six weeks to do that and because nobody was on the field in the spring, we took that opportunity,” explained Jets head coach Les McTavish. “Essentially what we did in the infield is, we graded everything down. We took all of the grass off, all of the dirt, all of the shale and then started over. We upgraded the sprinkler system, we re-crowned and clayed the entire surface and then added topsoil and sod. We put in a new drainage system all around the infield as well so it should drain much better. There’s weeping tile and a new pump system to get the water off the field. It’s taken a little bit of time for the ground to get used to being redone but we’re happy with it and excited. I think as we go forward, we’re certainly in the right spot.”

The early start to the upgrades will mean the diamond will be more than ready come the fall Jets season.

Another benefit to starting in the spring was the availability of contractors to do the work needed for the upgrades at the stadium.

“We started doing the work with Dwayne Kambeitz out of Lethbridge, he did a lot of the upgrade work at Spitz Stadium, Lloyd Nolan, Canola Harvest and a lot of the fields in Lethbridge. We got lucky that we had the ability to use him and he was able to drive out and bring his crew out. We had help from others as well. The Jets Stadium Society did a lot of the work and oversaw the project but Dwayne Kambeitz was the main contractor on the job. We had a lot of volunteers too, I think we had 15 or 20 people laying sod. It was a big project,” continued McTavish. “Dwayne’s a professional and he did a lot of work on that field. He certainly spent a lot of time and effort and did a great job for us.”

The infield restructuring was long looked at as a needed upgrade for the stadium but finding the time to get the work done in the past had always been a challenge. With Jets Stadium used for the majority of the spring by the Jets and Vauxhall Spurs in the summer, August was looked at as the only viable time they could get it done, until COVID came.

“We had been planning (upgrades) for years, we just had never been able to do it because there just isn’t enough time off of the field. We had talked about doing it in August a couple of times but it’s so hot in August that it’s a challenge. It’s a small window and then we’re back on the field so if COVID wouldn’t have hit, I don’t know when we would have got to it. It was always a part of our plan, but it was never anything definite,” added McTavish.

Additional off-field time has allowed for another big upgrade for Jets Stadium as well.

“Right now, Nate Cummins and his crew are upgrading down the right-field line at Jets Stadium. We’re building a new batting cage and then we are Astroturfing a 75-foot area for ground balls and agility and stretching. We’re pretty excited about that and I think it could be utilized by the Spurs and the high school but it will be utilized by us lots early in the year when there is still snow on the field. There’s a pretty good chance we can get out and into the cage because it will all be wind screened in. It’s three-quarters of the way done right now and it’s certainly a nice project,” said McTavish. “Nate Cummins has spent a bunch of time and effort overseeing that project which is really nice. We’ve had a lot of people involved and helping with it and donated labour or supplies, or equipment.”

With the Major League Baseball season starting later this month, baseball is in the air for the first time since early spring and the Jets are already itching to get back on the diamond. While players won’t be back in Vauxhall until the very end of August, things are looking positive for the start of the 2020 fall season and McTavish is hopeful things will be back to a relative normal in terms of baseball operations.

“The boys will report August 28 and we’re planning to go ahead, assuming everything is good on the school front. We’ve met with the Horizon School Division and we’re setting a plan in place to make sure we follow proper protocols and such. We are excited and planning forward. We’re looking forward to our fifteenth season and certainly excited to put our fourteenth season behind us, let’s put it that way,” said McTavish with a laugh. “I think there are a lot of people excited to be done with 2020. There will be a lot of adjustments and things that we need to do going forward but we are confident we can follow suit with direction from the school divisions and province.”