The unite the right movement is gaining traction in the province as Albertans, most of whom did not vote for the current NDP government, seek… Read More » 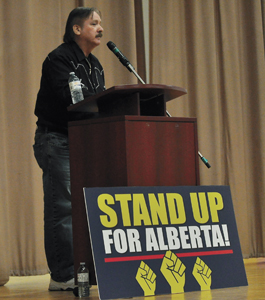 Greg Price Vauxhall Advance gprice@tabertimes.com For George Clark, speaking out is a wish he continues to fulfill for the memory of his mother. Clark was… Read More »

Stand Up rally coming to area

MLAs urging farmers to get informed about Bill 6

J.W. Schnarr Southern Alberta Newspapers With the passage of Bill 6 early in December, the focus for local producers now must be on how these… Read More »

Stan Ashbee Southern Alberta Newspapers - Coaldale Budgets often make Albertans nervous, as they cringe and ask; what funding will be cut or how many… Read More »

There's an old adage, courtesy of Benjamin Franklin, that says, "An ounce of prevention is worth a pound of cure." The 18th-century inventor, writer and… Read More »

Nikki Jamieson Vauxhall Advance njamieson@tabertimes.com Vauxhall will soon be home to some Little Bow representation. While rumours of an office for the community have been… Read More »