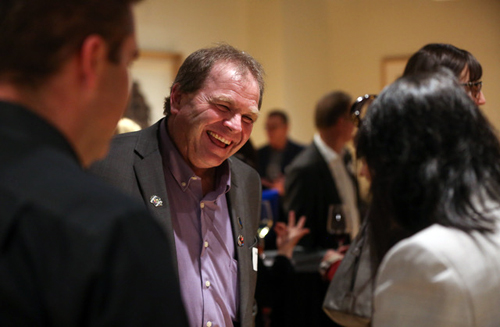 MEETINGS: M.D. of Taber councillor Brian Brewin was doing some networking at one of the Plant Protein Alliance of Alberta events. ADVANCE PHOTO SUBMITTED

More and more organizations, businesses and municipalities are recognizing the importance of a group like the Plant Protein Alliance of Alberta.

The Municipal District of Taber council just recently voted to become a non-voting member of the alliance which is convincing Alberta farmers, entrepreneurs, investors, economic development offices and government officials that the time is right for Alberta, and the two other prairie provinces (Manitoba and Saskatchewan), to become global leaders in plant-based ingredient processing. Its focus is connecting companies, growers, investors, universities and colleges, making them aware of the huge potential in the plant protein industry.

Alberta already has at least 15,000 crop farmers growing canola, wheat, pulses, lentils, peas, hemp and more. What the province hasn’t got is a strong crop-ingredient processing industry, a situation the PPAA has set out to change.

“We were federally incorporated as a not-for-profit on May 1 of last year. We have been around as an organization for longer than a year and we were known as the Alberta Food Cluster,” said Dennis McKnight, CEO of Plant Protein Alliance of Alberta. “The first meeting we ever had to promote this idea of a specialty food ingredient food cluster happened in Lethbridge about two and a half years ago and we had 12 people out. We recently had another event out there with Dr. David Hughes and we had 200 people out. So the awareness is growing.”

Advancing further-value processing of crops on the prairies, McKnight grew up on a farm in Saskatchewan. And like many people growing up in rural areas, there has been the view of better capacity.

“For years we have been talking about going beyond selling our raw commodity. Capturing that value here instead of shipping them away and letting others gather the value and then ship them back to us at a higher price,” said McKnight. “How do we take advantage of this fast emerging trend towards plant-based foods and their ingredients and turn it into a real economic plus for our region?”

There is more and more of a focus on living better, eating better and being healthier. The prairie provinces are the world’s largest grower and exporter of pulse crops (peas, lentils, beans, chickpeas etc.), but we ship away 85 per cent of them as a raw commodity, according to McKnight. Of all the food production in the province, 80 per cent of it comes from southern Alberta.

By 2050, the global population is expected to be 30 per cent larger. At the same time, people are becoming more affluent, demanding more protein, and turning to crop proteins to supply a healthier diet. These trends add up to a projected need for 59 to 98 per cent more crop protein by 2050.

“The demand is there where more and more people want lentils, peas or whatever. It’s a major ingredient in a lot of our foods nowadays. Most plant-based foods, soy has been very dominant. But there has been a bit of a backlash against soy because first off it’s a GMO (genetically modified organism) and some people don’t want it. Or they have allergies or they are concerned about the amount of estrogen that is created by soy,” said McKnight. “So the pulses have moved into that space for people who want an alternative for soy. We are using our crops for everything, like personal-care products. A lot of our foods in the 80s, 90s and early 2000s were laced with chemicals and people nowadays don’t like having chemicals in their food and they don’t want it in other products.”

The Plant Protein Alliance of Alberta focuses on networking as it grows its membership which is currently at around 60 members, with hopes of eventually being around 100 by the end of the year. The organization does get some funding from governments and from Protein Industries Canada, which was announced as one of Canada’s five Superclusters.

“There were a number of us that came together and formed a Pan Prairies Cluster. This is bigger than any one province. Alberta, Saskatchewan and Manitoba, we really grow the same crops, but we have been going around the world competing against each other, but the world doesn’t know the difference between a pulse crop in Manitoba, Saskatchewan or Alberta,” said McKnight. “So it’s a realization we had to come together and market ourselves and our research capabilities are stretched over all three provinces. We represent Alberta in the Pan-Prairie Partnership.”

After forming the cluster, the federal government announced a super cluster competition, putting up a billion dollars for five organizations across Canada to compete for the funding. There were 53 organizations competing for the money where the Pan-Prairies Cluster was shortlisted.

“Protein Industries Canada (PIC) committed $153 million and that money is available to help support growing our region as a cluster. How do we take advantage of all these wonderful crops we grow through value-added processing here,” said McKnight. “It’s for anything that crops can be used for as an input along with being used as feed for livestock.”

PIC’s work will focus on improvements and opportunities in four areas: crop breeding, crop production, value-added processing, and export development. The federal funding supplements roughly $400 million of cash, in-kind commitments and venture capital support that PIC has already secured from its members. According to an independent study, this initiative is estimated to generate over $700 million in new commercial activity and billions in incremental GDP over the next decade together with approximately 4,700 new jobs.

“There is no shortage of protein demand in the world, and that is true for both plants and livestock. When you process all these crops, roughly 20-some per cent is proteins. You are left with 70 per cent that is starch, fibre and other micro nutrients. The question becomes what do you do with that 70 per cent?” questioned McKnight. “A lot of our efforts are in what are some of the other uses we can have for some of these by products? Right now they are just being dumped, or given away for free. There has to be a value to that as well.”

The Plant Protein Alliance of Alberta holds four networking events a year in which it tries to get the entrepreneurs, bankers, researchers etc. out in engaging the value chain with a guest speaker.

“The loneliest job in the world is being an entrepreneur. You feel the weight of the world on your shoulders. Getting them out and meeting other entrepreneurs, they share their experiences and their challenges,” said McKnight, adding in June, there will be the Plant-Based Food Summit coming from Europe. It will be the first time the summit has not been in Europe.

“We are going to get a lot of the big global food brands like Nestle. Most of them are based in Europe. It’s really an opportunity to showcase our region to the rest of the world.”

For food manufacturing and those who want ingredients, it used to be the plants were built where the large populations were. Now, they are building the plants where the inputs are.

Former reeve and current M.D. of Taber Councillor Brian Brewin is on the board of directors of the Plant Protein Alliance of Alberta.

Roland Seeds, SouthGrow and the M.D. of Taber are members, according to McKnight.

To learn more about the Plant Protein Alliance of Alberta, you can e-mail Dennis McKnight at dennis@ppaa.ca or long onto the website at ppaa.ca/.