Major water-supply project to be showcased in open house 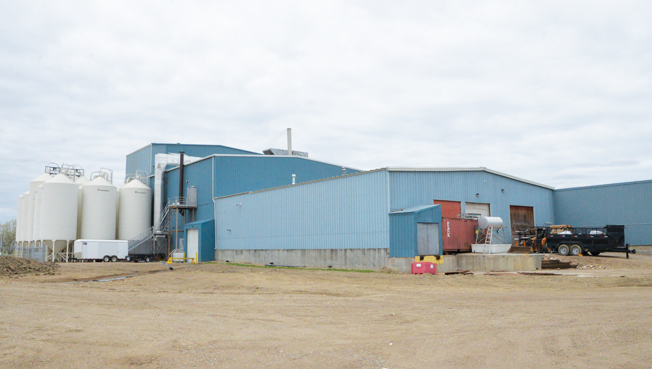 UPGRADES: PGP will be hosting tours at their plant located four kilometres east of Vauxhall on Township Road 13-1A (pictured above) during their grand opening to showcase the recently completed water supply project. ADVANCE PHOTO BY COLE PARKINSON

A major water supply project in the Vauxhall area is heading towards completion after two years of planning and construction.

“This was always a project I knew I would need to do when we took over the plant. We (Delanoy Family) bought both of the plants in 2012 and the dehy plant was not food safety certified. We always followed good management practices and recognized food safety,” said Ann Zalik, PGP general manager.

The project will provide water to the PGP dehydrated division plant located four kilometres east of Vauxhall, and involved construction of a 7.2-kilometre raw water supply pipeline and a pumping facility from a Bow River Irrigation District reservoir near the PGP plant to the VDRWSC water treatment plant.

Other construction involved a four-kilometre treated water pipeline to the PGP plant as well as construction of a new pump-house and water storage tank at the PGP plant site. With two plants under the PGP umbrella, dehydrated and fresh pack, the dehydrated plant was in need of this project due to international food safety protocols.

“I’m going to say it was 2017 when we got notification from the States that they were going to buckle down on any project coming into the States that had a designated food safety standard. So that sped up my timeline by about two years,” continued Zalik, who also stated PGP had just come off of some multi-million dollar upgrades to both plants.
“We initially looked at setting up our own water treatment facility because the big thing was we needed to have potable water coming into the plant for all purposes. We have only used a system of filters and chlorination in the past and that is still acceptable. However, to have SQF (Safe Quality Food) you need potable water coming in.”

With a need for more access to water, PGP started conversations with the Municipal District of Taber and Vauxhall and District Regional Water Services Commission.

“We then approached the M.D. and we had a great couple of councillors on our side who understood what we were going through. We heard in discussions that there was enough capacity at the Vauxhall water treatment facility. Tying into it with the volume we needed was a feasible option,” said Zalik. “We commissioned MPE Engineering to give us a plan overview and now we are at the stage where we have water lines in place, our facility is in place for pumping into our plant. Now we are looking at commissioning the system. So they are testing this week.”

In late 2017, Vauxhall town council and M.D. of Taber council agreed to undertake up to a $900,000 debenture to complete the Prairie Gold Potato Water Supply Project.
From there, the cost was shared 66 per cent by PGP and 34 per cent by VDRWSC.

Around $500,000 of that PGP cost was funded by a grant from the Industry Development Program of Alberta Agriculture and Forestry.

With PGP, the Town of Vauxhall, the M.D. of Taber, VDRWSC and BRID involved in some level, there was also a handful of other contract workers involved in getting the project up and running.

The raw water line was with BRID, MPE did the initial design, Craig Pittman (M.D. director of infrastructure) located gas/oil lines, treated water line meter vault to plant was done by TA Excavating, the pump house was Porter Tanner and the storage tank was from a company out of Ontario while VDRWSC managed the project.

While the help was needed, with that many different organizations involved, it could have led to some challenges to the project but Zalik reports everything went relatively smoothly.

The project will now lead to better stability both job-wise at the plant and in the fields for growers.

“The big thing is stability. Between the two plants, we employ just under 100 people,” said Zalik. “That’s a big part of it, the industry. What we process at the dehy plant is all pretty much second-grade product. The quality of Alberta potatoes is pretty much second to none anywhere in the world. We produce an extremely high-quality product. If you produce a number one product, there’s always some number two. There is always some product that is not up to grade and the specs that plants like Hostess, Lamb Weston, Cavendish, McCain’s or Old Dutch. They have to have an outlet for those potatoes.”

From the VDRWSC’s perspective, the project was much needed for not only PGP by the Vauxhall area.

“This is a great project for the region. It will make better use of our water treatment plant, and it will ultimately reduce costs for current users of the system as well as for Prairie Gold Produce,” said Richard Phillips, chair of the Vauxhall and District Regional Water Services Commission.

The commission also touched on the partnership that was needed to get the project to the finish line.

“I think it is great for the M.D. of Taber, Town of Vauxhall and surrounding areas. This partnership opens up many possibilities for PGP to expand markets. It also shows that they are invested in their community, which is great to see,” said vice-chair Leavitt Howg.

Another crucial part of the partnership was finding land to use for the pipes.

With the majority of land used being owned by BRID, the M.D. or PGP, Zalik said they were great partners in helping the project along.

“To lessen the impact on surrounding landowners, most of the land we went through was owned by either the M.D., BRID or Prairie Gold. We didn’t want to bother anyone else,” she added.

There was only a little sliver of resident-owned land that was needed and the BRID had zero issues in working with the landowners.

With different lines in place, different portions are operated by the different organizations involved with the project.

“The regional water commission is going to be responsible from the water plant to the pump house to the point of chlorination before it goes into the tank. Once it gets there, PGP does not require the certified operator. All the certified operators will be M.D. employees,” said Jack Dunsmore, M.D. contract worker.

In order to celebrate the completion of the project, a grand opening is being held at the dehydrated division plant on June 10.

“It is going to be centred around the commissioning of the potable water line. What our plants produce and why it is so important to have this both for industry and the region,” explained Zalik.

“Overall, every project has its difficulties and challenges moving forward however all were overcome. And here we are, very close to having a completed project,” added Pittman.

The grand opening goes from 1-3 p.m. on June 10 and plant tours will be conducted after. Prairie Gold Produce dehydrated division plant is located four kilometres east of Vauxhall on Township Road 13-1A.