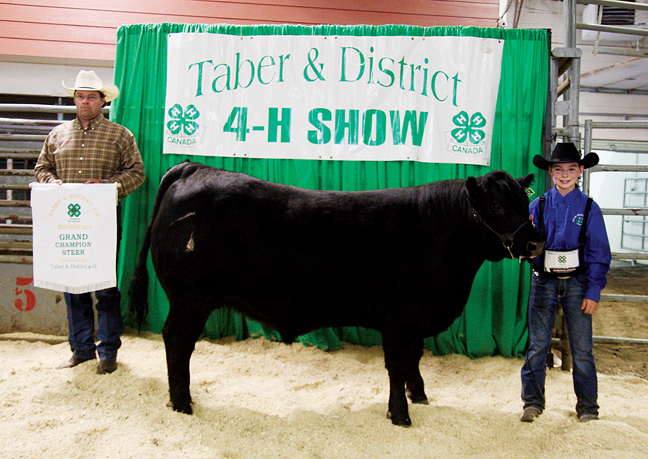 ANIMAL FARM: The judgement has come in, and it is the Retlaw Prairie 4-H Beef Club which has one of its members owning a grand champion. Chase Plumb’s hard work with Smokey was recognized with the banner of Grand Champion Steer at the Taber Agri-plex on Friday. ADVANCE PHOTO SUBMITTED

Chase Plumb of the Retlaw Prairie 4-H Beef Club has been crowned king of the Taber and District 4-H Show Sale this past weekend at the Taber Agri-Plex.

He earned the title as the handler of the Grand Champion Steer at this year’s show, being a veteran of 4-H despite his still relatively young age.

“I’ve been in 4-H for five years. I’ve had some good experiences from 4-H camps out by Elkwater. I’ve learned some leadership skills and taking responsibility,” said Plumb of helping raise his grand champion named Smokey, which sold for a whopping $7.25 per pound. “My favourite thing I’ve done is probably getting to know the calf, halter breaking them and working with them. They get to know you and then they like you more.”

Plumb got his animal in October, giving the youngster many months to build a bond on many different levels.

“The bond gets stronger and stronger. With my heifer that I just did, we didn’t work with her right away. I just started working with her two months ago and she’s now like a puppy dog. It’s pretty cool to see that,” said Plumb. “It’s like a family pet.”

Plumb admitted there were some trials and tribulations in raising his animal in complying in doing what he wanted it to do, but it didn’t deter him from Smokey becoming a grand champion in Plumb caring for her.

“Don’t give up. If you give up, it becomes a wreck and it doesn’t work out very well,” said Plumb. “You have to push through.”