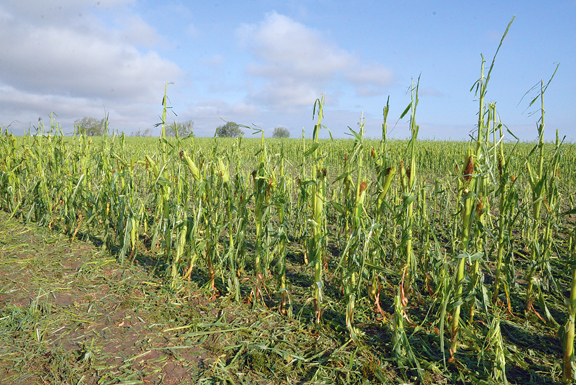 With the Taber/Barnwell area being hit hard by hail last week, crop insurers have been busy with claims coming in from several different spots across the province.

The local region, while the most recent, has not been the only hit area in the past few weeks either as several different places in the province have seen significant storms that have wiped out crops due to hail storms.

“The last few days Alberta has had some pretty devastating hail storms. The July 27 storm, ran from south of Erskine to Hardisty and on toward Lloydminster, followed by a July 30 storm that progressed from Alix through Provost and into Saskatchewan toward Unity. There were also some scattered smaller storms in northeast Alberta. Some producers were hit by both storms,” said Zsuzsanna Sangster, product co-ordinator for Agriculture Financial Services Corporation in email correspondence with the Times. “As of August 1, there were approximately 4,200 hail claims received for the year.”

Right now, AFSC is in the midst of processing claims throughout the province.

“Nearly 1,600 clients have claims that AFSC is in the progress of adjusting. The Parkland region has 670 clients affected, followed by 488 reports in the south, 433 from the central region and only seven claims submitted from the north region of the province. These may not represent all of the claims as insured clients have 14 days to report hail damage and could still be assessing the fields for evidence of a loss,” continued Sangster.

With the Taber area hit late last week, that number of claims has risen even higher. The hail storm hit several areas in southern Alberta including Taber and Barnwell farms.

“Not included in those stats, is the large damaging storm from August 6 which made a path that was about 22 kilometres wide and 220 kilometres long moving through Turner Valley, Picture Butte, Taber, Foremost, Lethbridge, High River and parts of Claresholm,” added Sangster.

With AFSC now dealing with the Taber damage, they expect several claims to come during the 14 day period.

While they don’t have all the claims in as of yet, they do understand the scope of the damage the area received during the storms.

“The storm was quite severe and the damage is expected to range greatly. Based on a preliminary hail synopsis, damage ranges right up to complete destruction of crops,” explained Sangster. “In Taber alone, there are over 400 producers and it is estimated that over half were impacted on August 6th. Corn and fresh vegetables were badly shredded.”

In a CBC interview, local grower James Molnar estimated their insured crop claims would cover a large portion of the damage, though it would be around 15 to 20 per cent short of their costs.

While AFSC does provide financial help with destroyed crops, they realize it’s the worst-case scenario for growers.

“AFSC does provide spot loss coverage for damage caused by hail. This helps with the financial loss, but ultimately producers want to harvest the crop they have invested not only cost but their time as well,” said Sangster.

”As of right now, AFSC cannot comment on the overall impact that storm has caused until all of the claims have been completed. Hail can happen from March until right into October. So far this year, the number of hail claims has been close to the normal amount reported in previous years.”