Root yield losses for beets due to hail; ASBG

Posted on September 19, 2019 by Vauxhall Advance 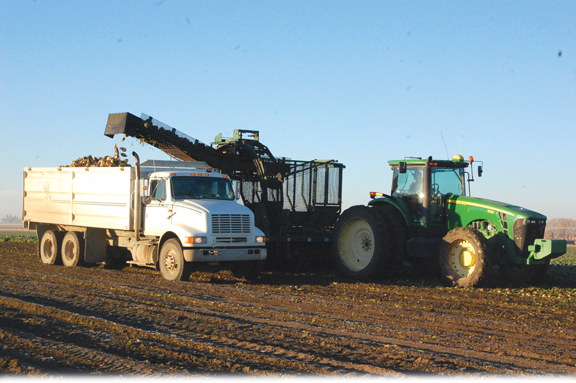 As the region transitions from late summer to early fall, local sugar beet producers are readying their operations for the big harvest push in southern Alberta.

“Pre-pile harvest was scheduled to begin Sept. 12,” said Arnie Bergen-Henegouwen, president of the Alberta Sugar Beet Growers (ASBG). “Participation in early harvest will likely be light in the areas that have been affected by the hail storms.”

“The latest average yield estimate is around 28 tonne and initial quality surveys indicated very good quality. Roughly 3,600 acres were affected in the storm in early August, many instances had 100 per cent defoliation. The beet tops will grow back but root yield losses will be up to 40 per cent. This storm hit at the time of year which affects the beet crop the most. There have been several other hail storms that have affected the crop as well.”

Enhanced Canadian sugar quotas announced in the new United States-Mexico-Canada Agreement (USMCA) have yet to make an impact on the local industry as the deal still hasn’t been finalized.

“USMCA has not yet been ratified by the U.S. or Canadian governments. So no impact to us yet,” said Bergen-Henegouwen.

Changes to driver training standards are set to have an impact on the local beet harvest in ensuing years, but right now an exemption is in place for agriculture. Effective March 1, 2019, drivers seeking a Class 1 (tractor trailer) license are required to complete Mandatory Entry-Level Training (MELT) to apply for their commercial driver’s licence, unless they have received an agricultural extension.

“Farmers are eligible for an extension under the old driver training rules until 2020,” said Bergen-Henegouwen. “The problem now is the long waiting lists for driver testing.”

Consultations on the UCP’s farm safety legislation as a replacement for the NDP’s Bill 6 were a good opportunity to provide feedback.

“Provincially, we appreciated the opportunity to give input to the Farm Freedom and Safety Act,” said Bergen-Henegouwen. “Dialogue with the Alberta government has been good.”

With a federal election now set for Oct. 21, Bergen-Henegouwen says the ASBG will be looking to press candidates over key issues related to agriculture.

“On the federal side our dialogue with candidates has been encouraging them to acknowledge the importance of agriculture to Canada by promoting the Producing Prosperity Campaign, whereby Canadian agriculture has three pillars: economic growth, food security, and environmental stewardship. Trade has also been a common topic of discussion with the candidates.”