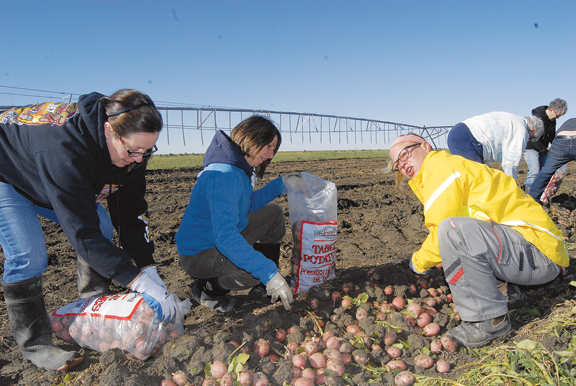 While many parts of Alberta face recession, southern Alberta continues to grow.

Grow in population, grow safe and nutritious crops and expand the number of value-added products to feed a hungry world.

And the future is even brighter for people living in Canada’s “premier food corridor.”

Those farms and many more are aided by satellite technology developed and controlled in Lethbridge, he added. And today global companies are conducting advanced food-related research, adding to the body of specialized knowledge that’s been developed at the federal research station along with the city’s college and university over many years.
“Lethbridge has technology that exists nowhere else,” some of it based on geomatics applications first envisioned at the University of Lethbridge. Entrepreneurs who put those developments to work saw their agriculture-related service so well accepted that a San Francisco company bought the business, he said.

But the operations centre remains in Lethbridge.

Now, Lewington said, that technology is so advanced that the satellite data could adjust each sprinkler head on an irrigation pivot, to the needs of each plant. Technological advances not only increase a crop’s value but they’re conserving water.

Water conservation will be increasingly important as agricultural production grows, but Lewington told a questioner major investment will be required to meet future needs. And no doubt, there may be opposition to building more reservoirs or dams.

The university’s water resource researchers have created models of how more water could be captured, he added.

“And SouthGrow is working on a policy advisory group with the Alberta government.”

With about 60 per cent of Canada’s beef produced here in southern Alberta, Lewington told another audience member any reduction in the amount of red meat bought by Canadians will allow more value-added exports to developing nations where beef and pork are in high demand.

At the same time, he said now’s the time for investors to launch a value added industry focused on southern Alberta’s peas and lentils – in response to North Americans’interest in alternative meat-like protein foods based on those crops.

With a gross domestic product valued at $8 billion per year, Lewington said the food corridor through Lethbridge and Taber has created an economy that relies very little on the oil industry. Nearly 20 per cent of the city’s GDP is directly tied to agriculture, he noted, plus income earned in related fields like transportation, equipment manufacturing and sales, and food related research.