Posted on September 9, 2021 by Vauxhall Advance 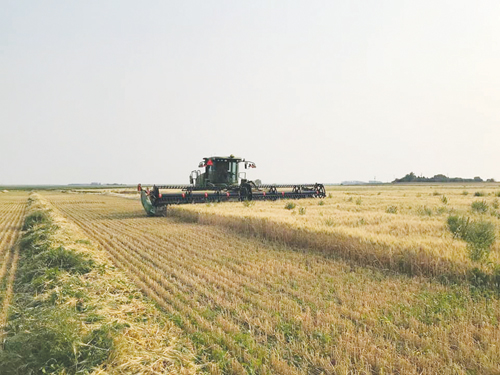 While plenty of Canadian Foodgrains projects across Alberta are just wrapping up their harvest right now, the Vauxhall and District Growing Project got theirs underway at the end of July.

After the group noticed the crop wasn’t hitting stride in late July, they made the call to silage their product with feed prices high.

“Well, it was an early harvest because we were checking the field out in July and we weren’t very happy with what we were seeing. So, we tried to figure out some potential options other than combining it, or some way to deal with the problems in the field because we didn’t want to leave the weeds there for the next farmer to deal with next year,” explained Kerby Redekop. “There was some disease there as well. So, a couple of our committee members were walking the field and they were talking over some ideas and they decided to see about silaging it because feed prices were pretty good this year. They called a local feedlot and asked about that, and it ended up working out really well. The feedlot came and took a look at it and said they could take it. They were out within a day or two with their silaging crew and were able to get the crop off. That was done on July 30, so it was a lot earlier harvest than we were expecting, but it turned out pretty good.”

“We may have been the first Foodgrains field harvested this year in Western Canada,” he added with a chuckle. “It was more about the silage. You have to wait until the crop is the right moisture and when they came and took a look at it, it happened to be perfect at the time. They got right out there and got it done.”

This year, the group planted durum wheat with Carl’s Ag Ventures providing the seed and Henry and Hedie Wiebe supplying the land north of Vauxhall.

“This year it was a durum crop, which of course the durum market is really hot right now. Even with durum prices, I think it was still a good decision to silage the crop,” stated Redekop.

Heat and dryness have caused farmers plenty of problems across Alberta this growing season, but the Foodgrains Project had more issues. While it played a part, Redekop explained the heat wasn’t the biggest factor in deciding to silage the crop.

“You know, I don’t think (dryness) was the major factor. It would have contributed a little bit to the weeds we had there, just because the crop was a little more stressed, which would have played a part in the disease that came in. But honestly, I think the biggest part of it was the wind erosion that we had this spring. On May 18, we had really strong wind and it moved a bunch of topsoil on our field. We’ve seen that in some other fields in the area this year too, and when they get some of that topsoil moving, it carries some disease with it. I think the major factor was the blowing land this spring.”

The decision to silage meant the growing project couldn’t get together and celebrate the season during a normal harvest. As the feedlot brought in their own equipment to silage the crop, it meant the regular volunteers weren’t needed.

“That was one of the disappointing things — we couldn’t have our normal harvest day because the feedlot has their own silaging crew. They brought them out and a lot of the farmers around here don’t have that equipment, so the feedlot took care of the silaging. We didn’t have to call around to get everyone out with the combines and trucks. We already have communicated with all of our supporters and said ‘sorry, we can’t do it this year, but hopefully next year we’ll be able to do that again,’” continued Redekop.

Looking to 2022, discussions with the group will continue on what will take place.

“As far as next year, we haven’t talked about it yet. A lot of it depends on the land we get and what the farmer that rents us land wants to see in his rotation. What he planted this year and what he’s going to plant the year after we’re on the land. It’s hard to say, but we usually try to stick to some kind of cereal crop. It’s typically been either barley, hard red spring wheat, or durum wheat,” added Redekop.

Despite not needing volunteers to harvest the crop this year, a ton of volunteer work still went into the project.

The volunteer work is much appreciated and the group is hoping to get back to the regular schedule next year and include the entire community, not just farmers.

“I think that’s a really important part of it. Obviously, the main reason we do this is so we can make a donation to the Canadian Foodgrains Bank in Winnipeg and they take that donation and it’s matched by federal government funding up to 4-1 times. They then distribute it around the world and they have a really good reputation, and they spend very little money on their own administration costs, so it’s a very good charitable cause,” continued Redekop. “That’s the main reason we do this, but the second main reason is definitely the local effort and the way it pulls the community together. I think this year even growing the crop we had probably 15 farms or so involved in doing different parts of the crop. Whether it’s irrigating, seeding or spraying. And then the harvest day always brings out somewhere around 20 combines and probably 10 trucks or so. That’s potentially another 25 farms involved. Plus, we often do a fundraising dinner and try to get the community members out, especially those who aren’t part of the farming community. They can come out and see what we do. It just gets so much of the community involved and that was a disappointing part of the project this year,