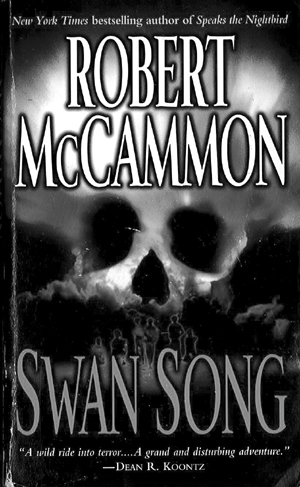 The post-apocalyptic and horror genres of fiction have inevitably overlapped since both enjoyed a huge flowering of popularity after the mid-point of the 20th century.

There had always been post-apocalyptic fiction prior to the 20th century, however our industrious capacity as a species to create new and deadlier forms of weapons, culminating in the Cold War triple threat of prospective annihilation via chemical, biological and nuclear warfare — led to an explosion of works by novelists who felt that now that humanity possessed the means for its own destruction, despite our best efforts, destruction would be the inevitable outcome.

Never a genre of fiction that easily embraced bountiful optimism about the future of the species, post-apocalyptic works from early in this era can in fact be depressingly pessimistic, such as Nevil Shute’s dark vision On the Beach (1957), Mordecai Roshwald’s disturbing novella Level 7 (1959), or George R. Stewart’s outbreak classic Earth Abides (1949).

The late 1950s and early 1960’s were periods of Cold War history where the prospect of nuclear conflict with the Soviet Union was as real as the threat of global terrorism seems to us today, and is reflected in the often hopeless outcomes of death and annihilation that conclude many of these works. Later novels in the genre would often focus on survivalism rather than outright annihilation, as readers became more attracted to searching for a glimmer of hope rather than more accounts of destructive futility ending in total Armageddon.

Inevitably, the horror genre and post-apocalyptic genre began to merge and intersect on the fringes, because whatever else it might represent, the idea of a full-scale nuclear, chemical or biological exchange between superpowers was nothing if not horrifying.

Some later authors, however, would begin to take this idea and give it a supernatural twist, to the epic delight of many readers. One of revered horror master Stephen King’s most popular novels, The Stand (1978), is a case in point. Shaped by King as an apocalyptic confrontation between good and evil, the sweeping novel follows this struggle through a wasteland America devastated by a military-engineered virus that escapes from the proverbial bottle.

Bearing strong similarities to the plot of The Stand, but should in no way be considered a rip off, author Robert McCammon’s less well known novel Swan Song (1987) is another sweeping account of an America prostrated by nuclear conflict, only to discover an evil supernatural threat lurking amidst the survivors and bent on their subjugation.

Not unlike The Stand, McCammon chooses to focus on the in-depth character development of a relative handful of players, on both sides of the good and evil equation. The reader is introduced early on to The Man with the Scarlet Eye, an evil creature with semi-omnipotent powers, supernatural strength and the ability to appear as anyone, who bears witness to the destruction as the opening act of “his party”. Facing him is the fragile but equally powerful Swan, a girl with the ability to bring nature back to life, even from the depths of a nuclear winter.

As both “parties” — good and evil — journey and cross paths with each other across a devastated mid-Western America in the lead up to an apocalyptic final confrontation, McCammon takes the reader through the intimate thoughts of many of his characters, and the decisions that eventually lead to their triumph or destruction. Coming tantalizingly close, but never really revealing the source of The Man with the Scarlet Eye’s hatred for humanity, Swan Song leaves one guessing about his origins and motivations, even his true nature — is he the Devil himself? A powerful demon? A man who was once a man but has now become powerfully, supernaturally evil? This explanation has been left to the imagination of the reader, much as Swan’s true origins are painted vaguely and left undefined.

Interestingly, considering the genre of fiction both The Stand and Swan Song inhabit as a matter of course, there are strong Christian undertones that run through the plotlines of both novels. While most horror fiction usually has some form of positive outcome (somebody almost always survives in the end) the idea of a struggle between good and evil — there is little question that “God” is somehow playing a key role in either novel — that eventually results in the triumph of the forces of good over the forces of evil, is a remarkable plot resolution for what are considered to be horror novels. Much in the horror genre is replete with evil creatures (vampires, werewolfs, even zombies) that have much to do with the corruption of widely-accepted Christian values and the fall of man. That the forces of good with God on their side come out on top hardly makes either novel unique in the total canon of fiction. But in the horror genre, this outcome could be considered anomalous.

McCammon’s mastery of language and prose are adequate in Swan Song, but the opening book of the nearly 1,000 page novel, in which he gives an account of the nuclear destruction and introduces us to our main characters, are really where the novel is at its finest. Although still a thrilling read, the final books and chapters of Swan Song leave an almost imperceptible impression that make them seem slightly pained and forced, as though McCammon spent the fire in his belly for the work early on during his writing process, and was simply going through the final motions of plot later on.

Despite this criticism, Swan Song tends to shine most in its exploration of main characters, such as Sister Creep, a New York bag lady who escapes the initial destruction only to encounter a timeless evil; Roland Croninger, the mal-adjusted son of a survivalist who is orphaned by the attacks; Col. James Macklin, a former war hero who descends into insanity and evil, and Josh Hutchins, a former wrestler who becomes Swan’s protector. Over arching these characters, some themes run deep through the novel, such as the inability of anyone to escape their past, either physically or psychologically, and the seeking of redemption, as well as the inevitability of final confrontations to resolve past mistakes or transgressions.

While hardly enjoying the towering reputation of King’s novel, which could almost be considered a sister work to McCammon’s magnum opus, Swan Song is not your average novel that falls under the genre of “horror” fiction. Although taking the Bram Stoker Award for 1988 (as well as the 1994 Japan Adventure Fiction Association Prize for Best Translated Novel) Swan Song still carries with it an enduring fascination for fans, much beloved by many who continue to express their admiration for the novel in the online community and via social media.

An easily readable, engrossing work that will remind fans of King’s The Stand, McCammon’s Swan Song is an exceptional novel worth investing the time for readers who enjoy the horror/science fiction/post-apocalyptic genres of modern fiction.