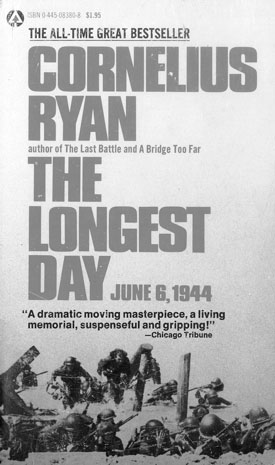 There are few military engagements that occurred during the 20th century which have been the subject of such intense and ongoing scrutiny as D-Day, the amphibious invasion of the northern French coastline by combined Allied air, sea, and land forces on June 6, 1944.

The battle itself has now almost passed into the ranks of legend, and those that were present on that fateful day, that helped drive home one of the last nails in the coffin that was Hitler’s dream of an empire that would last a thousand years, are now disappearing as the ravages of mortality exact their toll on the last living witnesses to history.

Time can be an unforgiving mistress, and it is our unfortunate fate as a species that with each passing generation, our history becomes even more distant and remote. Events and dates begin to blur, and most troubling, the ultimate significance of the recent past is increasingly lost on a populace that might not be able to find Normandy on a map, much less tell you that one of the pivotal victories of freedom and democracy over the forces of tyranny and absolutism was paid for in blood with the lives of thousands of young men. Men who had families, wives, girlfriends. Men who had mothers, fathers, brothers and sisters. Men who had hopes and dreams for the future. And men who would never be coming home.

It is easy for us here today, looking back through the pages of time, to view this most terrible of conflicts with an unintentional detachment that is often the product of a nuts-and-bolts style approach to historical research. While this will always have scholarly value, it doesn’t do much to inspire the reader’s imagination about what it might have been like to have been on the beaches of Normandy on the morning of June 6, 1944. There are some accounts, however, that are the exception to the rule, and author Cornelius Ryan’s The Longest Day (1959) is one of the true stand-outs in this category.

A former Irish journalist, Ryan was a war correspondent for London’s The Daily Telegraph starting in 1941, and went on to cover many aspects of WWII throughout the conflict. After the war, on a trip to Normandy in 1949 Ryan became interested in telling a more complete story of Operation Overlord (D-Day) than had been produced to date.

In what amounts to a herculean journalistic effort, Ryan began compiling information and conducting over 1,000 interviews as he gathered stories from both the Allies and the Germans, as well as French civilians.

It is worth noting, for instance, that as mortality marches on for the last veterans of WWII, writing a book like The Longest Day today — now more than 70 years removed from the conflict — would be impossible, as the vast majority of the combatants he interviewed have now died. Which makes works like Ryan’s such cultural and historical treasures, as they preserve and popularize accounts that might never have seen the light of day otherwise.

Sometimes categorized as “popular military history”, first-person style accounts from multiple sources similar to Ryan’s were few and far between before 1959, especially when attempting to tell the overall tale of a given conflict or battle through the many voices of those who witnessed it.
Hugely successful when it first hit bookstores in 1959, The Longest Day was later adapted into a major motion picture by the same name in 1962, with Ryan helping write the screenplay.

Interestingly, the book takes its title from a comment made by Field Marshal Erwin Rommel to his aide Hauptmann Helmuth Lang on 22 April 1944: “…the first 24 hours of the invasion will be decisive… the fate of Germany depends on the outcome… for the Allies, as well as Germany, it will be the longest day.” Chillingly prophetic words from the Desert Fox, who knew better than most that by late 1944 Hitler’s “Fortress Europe” was more fantasy than reality.

Exceptionally readable, Ryan’s account of the battle passes from individual witness to witness, but all melded together with a narrative prowess that makes the work read as though it were non-fiction.

There is much of the hard-nosed newspaper journalist’s style in Ryan’s descriptive passages, but it is his ability to make history feel like the reader is actually part of it that makes Ryan’s account so incredibly thrilling.

The Longest Day is actually Ryan’s opening installment in his trilogy of WWII military history. Written in almost identical style and involving the same dedication to exhaustive research and interviews, The Last Battle (1966) is a gripping account of the capture of Berlin by the Red Army in 1945, and the equally famous A Bridge Too Far (1974) details the failed airborne Operation Market Garden in Holland, and was later adapted into a star-studded blockbuster film in 1977.

While all generations re-write history to one degree or another, at the time that Ryan was writing The Longest Day, the invasion of Normandy on June 6, 1944 was still being viewed — at least in the West — as the ultimate death blow that heralded the soon-to-be-end of Hitler’s Third Reich.

While essentially this is still correct, D-Day’s significance has shifted in more recent decades to being considered an all-important battle and a knock-out punch that contributed to the acceleration of the death of Nazi Germany, but not the ultimate blow in and of itself.

Growing acknowledgment of the importance of Soviet victories on the Eastern Front in 1942-1943 at Stalingrad and Kursk have enhanced the role that the Soviet Union played in the destruction of Hitler’s empire, to a degree that would not have been widely accepted or popular in 1959 at the height of the Cold War.

Although Ryan might have known better than many that D-Day wasn’t the one battle that ended the war for the Allies, he knew what would appeal to his target readership. His writing is not overly grandiloquent or waxing too sweetly on the virtues of American leadership, democracy, and military prowess, but it isn’t a totally objective viewpoint or account in some respects.

That being said, Ryan can be forgiven considering his main audience, the American public of 1959.

Although this can make the work somewhat dated, it is still an outstanding first-person achievement in popular military history which should be read by anyone wanting to experience a degree of what it might have been really like to stare through a rifle sight at the unfolding of history.