Fascism on the rise in modern politics 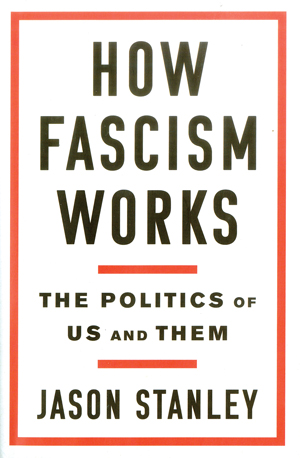 As the world watches the rise of right-leaning ideologies, populism, forms of extreme nationalism and demagoguery grip nations the world over in the early 21st century, most of us are at least aware that this same kind of tectonic shift in the nature of world politics is by no means unique. We’ve seen it all before.

And while it is most assuredly quite different from the past, we must be careful not to lose the actual meaning behind a political term like “fascism.” Make no mistake, the word is a loaded one. It conjures up images of jack-booted Nazis marching past a gesticulating Hitler, excitable crowds with arms raised in Nazi salute, snippets from some old black-and-white wartime propaganda film. Or maybe you see a barrel-chested Mussolini pontificating from on high as sleek blackshirts march on. Or a thousand other images from the 20th century, where the forces of a mighty liberal democratic coalition thwarted their evil fascist enemies and brought peace and order to the world once again. Right?

While not necessarily wrong, this is more part of a pop-culture narrative of 20th century history rather than actual reality. Since the triumph of the Allies in WWII, the myth tells us that the forces of fascism were defeated for all time. As the decades have marched on, the term — and the meaning behind it — has taken on an almost ridiculous air, a childish sort of boorish humour. The best example in this context is some children’s fascination with drawing swastikas on anything around them without knowing much about the meaning or history behind the symbol. They only know, in some vague sense, that it is taboo. The word fascism has gone through the same washing machine and emerged on the other side like a bright white fantasy of the past, sanitized and resigned to the pages of some old water-stained tome — not inhabiting and re-emerging in our modern world with a troubling frequency.

In his new book, How Fascism Works: The Politics of Us and Them (2018), Yale University philosophy professor Jason Stanley explores how the word “fascist” has “acquired a feeling of the extreme, like crying wolf.” In breaking down some of the foundational elements of fascism in the context of today’s reality — the mythic past, propaganda, anti-intellectualism, hierarchy, victimhood, an emphasis on law and order, and the evil of urban cosmopolitanism versus rural purity — Stanley illustrates that far from disappearing from the world, the employment of fascist politics is emerging once again on the world stage, and in many cases, undermining our democracies from within.

And yet they are only rarely referred to as “fascist” by anyone. As Stanley points out, what the normalization of fascism has done is transform the morally extraordinary into the ordinary. For instance, to apply a term like fascist (or even neo-fascist) to a president like Donald Trump seems like an overreaction even in a society whose norms are transforming along these frightening lines. Instead now all we hear are buzz-words like “alt-right” and others to define movements and ideologies across the globe that are fascist in everything but name. This kind of obfuscation is dangerous because it allows movements to dissociate themselves from loaded and normalized terms like fascism and replace them with their own brand of divisive hate-mongering served with a side of lies and propaganda. All while avoiding being relegated to the political fringes.

This theme — the idea that fascism is too ridiculous or the term too normalized for a similar system to ever achieve real power in a democracy like America — is explored at length in Sinclair Lewis’ semi-satirical 1935 political novel It Can’t Happen Here, where an elected president seizes power and becomes a fascist dictator. Lewis’ title explains more than anything how people who live in the “homeland of democracy” could ever come to believe that fascism could take root. How Fascism Works is actually Stanley’s unofficial sequel to his inaugural work, How Propaganda Works (2015), where the author explored the use of propaganda and lies in the context of modern examples from across the globe, including the United States.

Stanley opens his work with an examination of one of the key aspects of fascism, what he terms “the mythic past.” All fascist movements — in the present or in the past — extol the virtues of a fictional history of the nation and her people. Fascists often see their past as a glorious age, or sometimes even just a moment in time when everything was “right” — which has now been tragically destroyed by the ministrations of intellectuals, limp-fisted liberal city dwellers, immigrants, and any other racial or social enemy they might identify. For fascists, this perceived past is almost always associated with a sense of purity — religious, racial, or cultural — that needs to be re-established, by force if necessary, to ensure the future success and glory of the nation.

Most of us are hopefully aware that the kind of past yearned for by fascists is pure fiction. History is almost never as black and white as they choose to see it, and instead is usually a distinct shade of charcoal grey where morality and purity are pretty hard to identify. There has never been — and probably never will be, in any society or nation — a time and place where everything was perfect. But that’s the problem with nostalgia: often we remember our own past, or our own times, with a sense of fond remembrance about “how things were then” but at the same time we’re aware that not everything was or could have been perfect. Our lives had problems, no different than the nation. Nostalgia allows people to see their own past the way they want to see it, free from much of the negativity that may have once been associated with a time and place. That, however, is not an accurate representation of the past, of a time and place. But it’s where fascists find fruitful ground to propagate a myth of the past. And creating myths of the past has never been easier for fascists: social media and the Internet and the fake news sideshow have saw to that.

Stanley points out a mythic past is what Donald Trump is attempting to hearken back to with his “Let’s Make America Great Again” sloganology. What’s interesting is that Trump and his acolytes never identify — even after being asked specific questions — at what vague point in America’s past was everything supposedly great? Only Steve Bannon in November 2016, as the then president-elect’s chief strategist, hinted at the era his overlord had identified as America’s greatest. Talking about things to come, Bannon was quoted as saying “it will be as exciting as the 1930s.” The same era, then, when America had the most sympathy for fascism in the years leading up to WWII?

As we now stare stark-faced at the reality of modern politics, we must be careful to remember that fascism will always hold an attraction for many people. It claims to have answers and solutions, and it plays on manipulation and propaganda and most especially on people’s prejudices and their hatred. In How Fascism Works, Stanley touches on these motivations from the past while exploring the fascist warning signs that are spreading throughout our modern world at an alarming rate.