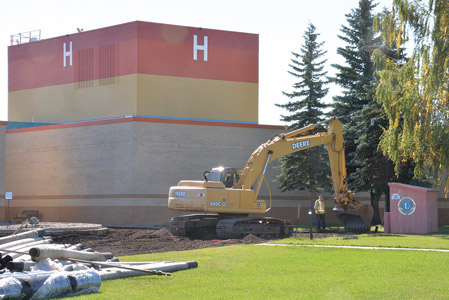 Advance photo by Trevor Busch
Send a Letter to The Editor

When the government hurriedly announced health-care cuts last week that will eliminate 11,000 jobs in yet another shift toward private-sector service delivery, a majority of Albertans were none too impressed.

Even in Medicine Hat, where both United Conservative MLAs would surely win an election held tomorrow, most seem to realize that continuously going after our public health system during a pandemic is a dangerously bad plan.

And so, it’s disheartening to imagine that what was announced was actually a watered-down version of what the government had intended.

Thanks to the work of CBC reporters Jennie Russel and Charles Rusnell, we know that when Health Minister Tyler Shandro said no frontline workers would be affected, he was neglecting to mention a few things.

Leaked documents from the summer show the true numbers were to be 16,700, and many of the jobs under attack were going to be nurses – as in, about as frontline as it gets.

However, since these reporters had the integrity to let the Health Ministry know they had the leaked documents so that a response could be included in their story, Shandro’s team had an entire long weekend to reproduce an 82-page report, which they promptly turned over to their pals at Postmedia.

And in the true fashion of Shandro’s maturity level, when it came time to make the announcement, his office refused to take a single question from either reporter that had worked on the original story.

This editorial isn’t really about the damage this government is doing, and has already done, to the health system. Our question this week isn’t so much about why this government keeps taking aim at public delivery of sevices.

Our question is, how come they have to be such cowards about it?

Seriously. If everything these people implement is so good for the collective, why are they afraid of answering questions about it?

Why do they feel the need to handpick the media they speak to?

And spare us the regurgitated speech about how the CBC is the “enemy of the people” and we need to defund.

The intent behind a reporter’s question is irrelevant. You either have the guts to answer, or you don’t.

If you had to defend something good – such as, say, public health care – you could answer questions about it all day, because defending things that are inherently good is easy.

So what does it say about Tyler Shandro and his press secretary, Steve Buick, that when it came time to defend this latest move, they consciously chose the coward’s way out?

It’s not like they don’t understand the optics here. They’re smart enough to know that ducking reporters is a bad look, yet they do it anyway.

They do it because the only thing that would be worse for the UCP than looking like cowards would be Albertans realizing that their government has absolutely no interest in what’s best for them.

But with all due respect, who among us still needs to learn this?

And when the premier not only didn’t fire him but doubled down on how good a job Shandro is doing, that’s the second every Albertan should have realized that Shandro’s “job” isn’t what they thought it was.

That should have been the camel’s back after a year of rewriting laws, tearing up contracts, double-dog daring doctors to move, promising mass frontline layoffs and setting in motion the systematic dismantling of rural care. But if none of that opened your eyes to the ideological intentions of Premier Jason Kenney’s United Conservatives, then let it be the time his health minister was afraid of the CBC.

It’s one thing to push austerity and privatization if you believe they will work for the people you’ve been elected to govern, but if that was the case, these guys would stand there like grownups and answer questions about it.

Maybe “success” means something different to the UCP, and maybe we need to ask ourselves if their “success” is worth what Albertans have already endured. We could ask Tyler Shandro, but we have a really weird feeling he won’t answer.
This editorial originated in the Medicine Hat News