Superintendent looks into future of education 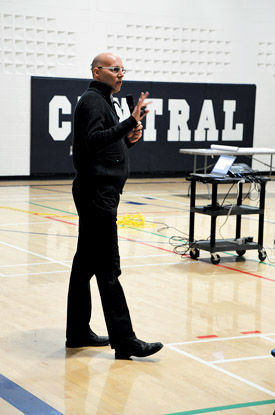 With the beginning of 2019 comes another year of possibilities.

As Horizon School Division embarks on another year of education for students at its various schools in the region, it hopes to keep its core values in place for the student body.

“I am most proud of the work all our staff do to ensure students feel welcomed, cared for, respected and safe. We pride ourselves on engaging all students and working with families to meet the needs of their children. We strive on meeting the needs of all children irrelevant of their language, cultural, or ideological backgrounds,” said Wilco Tymensen, superintendent of Horizon School Division. “Given that Alberta’s education system is one of the best in the world, it says a lot when Horizon’s results are above Alberta’s in 12 of the 16 measures. Our staff are committed to continually learning and working collaboratively to ensure student success.”

As Horizon embarks on its newest three-year education plan cycle, teachers and administration alike will continue to strive to have its students look past its own boundaries in southern Alberta.

“A core goal is to create contributing global citizens. Children who are successful in school and in life, give back to make society better,” said Tymensen. “We know that student success is a collective endeavour and believe that strong instruction and intervention are essential for student success.”

Education under the province was steered by Progressive Conservative rule for 44 years before an NDP victory in 2015. Given the uncertainty of the political landscape of 2019, Tymensen assures parents with kids at schools within Horizon that the endeavour to deliver the best education possible will remain the same.

“Alberta’s reality has basically always been one in which the governing party is the same before and after elections. This is no longer the case and the political realm in Alberta remains uncertain, but I would hope that there is less uncertainty within Education as we go into 2019. School jurisdictions do not historically approach elections apprehensively,” said Tymensen. “There is lots of work being done with regard to teacher and leadership credentialing, and preparation for new curriculum. These are good things, worth pursuing irrelevant of political divides and one would hope that they not cease should we have a change in government. Unlike previous curriculum, which took decades to update, the new model allows for continuous updates and is responsive to the needs of society. This is vital given the rapid pace of change.”

Horizon student enrollment remains stable at around 3,500 students with about 40 per cent being English Language Learning where their first language is not English. While some of the community schools have seen a population decrease, others are enrolling children from new families to the area.

“On the whole, Taber’s population is also unique in that over 30 per cent of the residents are under the age of 15. This makes Taber one of the youngest small towns in Canada (median age of 35). Over half our schools have an enrollment at or below 100 students,” said Tymensen. “While many boards would close/amalgamate such schools, our trustees have always been committed to maintaining our schools. We, like many of our parents and staff, recognize that small schools provide lots of benefits, such as more one-on-one attention due to small class sizes.”

While having a high ratio of ELL students within its ranks may be seen as a challenge to some school jurisdictions, Horizon merely sees it as a unique characteristic.

“I would also call it one of our strengths, as it means that we focus heavily on strong instruction and literacy which is good for all students,” said Tymensen.

As the superintendent plays the role of provincial political prognosticator, a possible shift from NDP to United Conservative Party (UCP) rule could prove a critical juncture the path of education takes in 2019 and beyond.

“The NDP government have certainly made education a priority. However, given the ongoing fiscal reality and growing deficit, I wonder how long they can continue to borrow. At some point one would think that they are going to have to pull back on spending. Given the upcoming election, there is certainly lots of unknowns about the future of education,” said Tymensen. “The UCP have talked about cuts in government spending and this will most likely include education. They have also talked about undoing some of the NDP initiatives and we could see changes with regard to school fees, nutrition programs, school and system leader credentialing, legislative changes, as well as new curriculum. Should the NDP lose, I would hope that whichever party gets into power, that they not blindly undo initiatives that are well thought out and worthwhile. We are ramping up for a new curriculum which was initially started by the PC party, and I would hate to go back to the drawing board as some of our current curriculum is still from the early 1980s.”

Social media is inundated in January with resolutions people are making t make their lives better. For Tymensen, the path to self-betterment should need no special day attached to it, a piece of wisdom he wishes to give to everyone for a happy, healthy and successful 2019 and beyond.

“I’ve never been a resolution guy. I’m also not a special day (e.g. Valentines or birthday) kind of guy. I’ve always believed that if something is worth doing, or if someone is important to you, you should not need an excuse such as new years to do it or show it,” said Tymensen. “Taking care of yourself allows you to take care of your loved ones. If you care about your loved ones, you should show it daily and commit to your resolutions, no matter the time of year.”