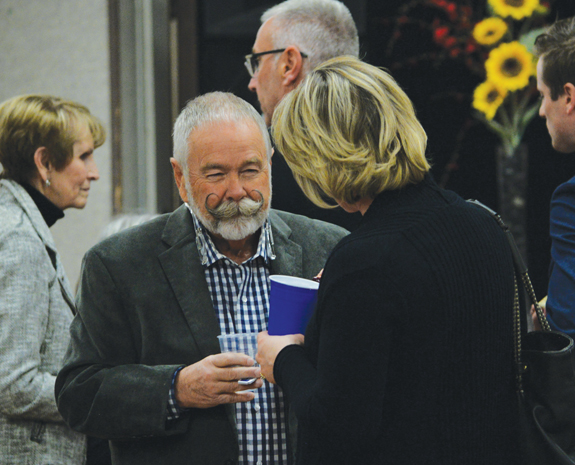 “As a Canadian — I’ll put it that way first — one, I’m disappointed, I’m saddened, sometimes a little angry. You sort of think, as details seep out, ‘No, this is Canada, I believe in the rule of law and people following the right way of doing things,’ and it doesn’t look like that’s what happened in this case,” said Shields.

The details of the affair are complex and sometimes confusing, but as more revelations continue to come to light the crux of the issue has centered on whether the prime minister, the PMO, or other government officials unduly pressured former attorney general Jody Wilson-Raybould to resolve the corruption and fraud case against Quebec-based engineering firm SNC-Lavalin.

The affair has now prompted two investigations — from the House of Commons justice committee and the federal ethics commissioner — and Canadians are still far from hearing the last word as more key testimony has been unfolding in recent weeks in Ottawa.

Shields stopped short of suggesting the Liberal cabinet’s actions in the matter may have drifted into the realm of criminality, but he was open about what another political scandal will mean for all politicians painted by the same bleak public brush of criticism.

“That’s a question for people who will investigate it to see if that is the case, but for me, in the sense of citizens out there in the public — as I move from being a Canadian to an MP — citizens we might find saying all you politicians are the same, they’re not doing things that are right, they’re doing things that are unethical — that’s the kind of thing that reflects on all of us, and the cynicism out there about politicians, and that’s the part of this that is reflecting on all of us, and that’s not good. And I can understand why people would be cynical, and that bothers me as well.”

The origins of the issue surround SNC-Lavalin’s efforts to secure a deferred prosecution agreement from the federal government — which allows companies to sometimes sidestep criminal charges for certain economic offences, such as bribery, fraud and corruption — and avoid a costly conviction which could block the firm from competing for government contracts for a decade.

Charges of fraud and corruption leveled against SNC-Lavalin can be traced back to nearly $48 million in suspicious payments it made to Libyan government officials between 2001 and 2011.

Through a deferred prosecution agreement, companies can admit wrongdoing and pay a financial penalty, rather than potentially facing stiffer penalties and restrictions following an unsuccessful trial.

The Montreal engineering giant employs more than 9,000 Canadians, and much speculation has centered on how much the Liberals might have wanted to protect these jobs in the lead-up to a fall 2019 federal election.

Shields wants no further restrictions placed on anyone called to testify with regard to the affair so that Canadians can begin to form a true picture of what may have gone on behind closed doors in Liberal cabinet meetings.

“ There’s been a lot of push-back to get the justice committee started, and get the witnesses to it, to have the witnesses be able to speak, and an ever-increasing push to have more come and speak, and it seems to be spiraling wider. The frustration is in the sense that we need to get the answers out, we need to hear. What does our party think? We need to keep pushing until they get the people testifying in the forums and the formats, because there’s more to this constantly.”

Aligning himself with the viewpoint of his party leader, Andrew Scheer, Shields believes that Prime Minister Justin Trudeau should resign following the allegations that have been unfolding regarding his conduct.

“I think that would be a good start. This is serious stuff. This is not playing around here, this is very serious stuff when you’re attempting to persuade the judicial system to do something different than what they’ve made a decision about, for some friends. It’s really not about jobs, It’s not about Quebec, it’s for your friends in high places? This is serious stuff when you start talking about influencing the justice system from a political position. That’s wrong.”

Shields views the ongoing scandal as a sad indictment of how power-politics is actually brokered in Canada at the federal level.

“Very, very angry and sad, and disappointed. This is not how it should be done. This is not how you expect your municipal politicians that you’re closest to do things, this is not what you expect provincially, and now with our supposedly senior level of government? This really reflects badly, to me, on my country, and that upsets me.”