Candidates make their pitch at forum 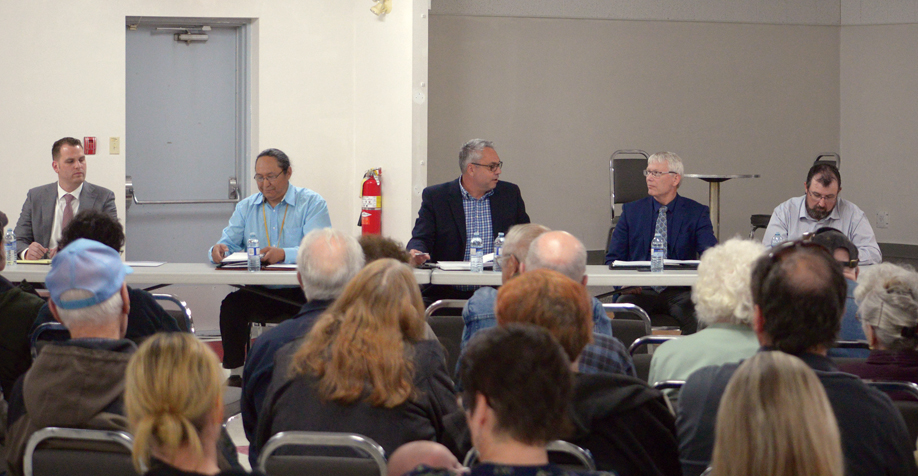 ELECTION TIME: (From left to right) Joseph Schow (UCP), Kirby Smith (NDP), moderator Ken Holst, Casey Douglass (Alberta Party) and Ian Donovan (Independent) were in front of a large Vauxhall area crowd on Monday night when they participated in the All Candidate Forum for the Cardston-Siksika riding, hosted by the Vauxhall and District Chamber of Commerce. Liberal candidate Cathleen McFarland and Freedom Conservative Party candidate Jerry Gautreau were unable to attend the forum. Attempts to contact McFarland to answer candidate questions were unsuccessful. ADVANCE PHOTO BY COLE PARKINSON

With the provincial election nearing, Cardston-Siksika constituents living in the Vauxhall area were able to hear views and platforms from candidates vying for the MLA job.

In an All Candidate Forum hosted by the Vauxhall and District Chamber of Commerce on Monday night, four of the six candidates were in front of a packed Vauxhall Legion Hall crowd.

Joseph Schow for the United Conservative Party, Kirby Smith for the New Democratic Party, Casey Douglass for the Alberta Party and Independent Ian Donovan were front and centre for a chance to make points on a variety of issues.

Candidates Cathleen McFarland for the Alberta Liberal Party and Jerry Gautreau for the Freedom Conservative Party were not in attendance.

The debate started with 12 submitted questions and ended with three questions from the audience.

The first question was around how each party would address the deficit Alberta faces.

“Our party has laid out a platform to bring investor confidence back to Alberta. Our plan is simple — get people back to Alberta. We will start by attracting businesses back to Alberta by cutting the corporate tax from 12 to eight per cent. That would make it the most competitive corporate tax in the country. Second, we will expedite permit processing times, too much money is held up waiting. Money should be working and paying for labour. The third is scrapping that job-killing carbon tax. Telling people Alberta is a great place to come because you can rely on the government to get out of your way. That is all people really want, so we’re going to do that. We are going to kickstart the economy and by doing that, we will have more people paying taxes in the province to help cut the deficit and balance the budget,” said Schow.

The NDP are focusing on diversification of the economy to bring a balanced budget to Alberta.

“The current government has dealt with a very tough situation. There was a collapse of oil price. The carbon tax was a way to create a balance and it’s a principle as well. There is a need to have a diversification of our economy with renewable energy and others which is a big part. Instead of making a bad situation worse, we focused on what mattered to Albertans which was job creation, diversification, but still maintaining a focus on health care and education. Right now the province has the lowest debt to GDP ratio in the country. The balanced budget the current government is focusing on over the next few years is for 2022,” explained Smith.

Meanwhile, the Alberta Party is planning to bring breaks for small and medium-sized businesses to further promote growth.

“We have got many plans to change the equation. One of the plans is to — immediately for Albertan small businesses — to let the deduction limit go from $500,000 to $1 million. Small/medium sized businesses, they get a deduction right away on their second half-million dollars of income that comes in. That will incentivize them to expand their businesses and invest. Combined with that, for child care, we are providing free childcare for the lowest income families. If it is over $30,000 per combined family, then it is $5 per day maximum. That allows single parents to get an education or work,” stated Douglass.

Former Little Bow MLA Ian Donovan (Wildrose, PC) promises to look out for the best interest of the riding while also working with the elected party to bring accountability back.

“The biggest one for me is, not being in a party means I can work with whatever party gets into government. I think we need to be accountable with our dollars. As a previous MLA, I only expensed $36.44 in three years. I always paid for my own meals, hotel rooms and flights. It is accountability, would you spend the money that way in your own business. For this riding alone, I would be against the UCP policy of selling off government leased lands and tax recovery land. I think that would sink a lot of our small farms and they have put that policy forward. As small farmers, we need to look at that as it would crush a lot of our smaller towns. I would be pushing a lot of our irrigation. The Irrigation Rehabilitation program got cut four years ago. If you look around this riding, it is the highest cash received riding in the province. There are over two and a half billion dollars in agriculture in this riding and I think we need to keep supporting it.”

Another big issue facing the province is the oil and gas decline.

Specifically asked was how the candidates and their parties will approach the federal equalization program when there is opposition to pipelines.

Smith says they would be preaching for cooperation and meaningful conversations to come to a solution that will benefit all.

“There is a lot of questions about the approach the federal government has in our local economy. There is a need, in some respect, for cooperation. In regard to the equalization program, in the past, there have been other parties that have orchestrated and developed that program. I think there is a need to bring those kinds of issues to the dinner table and the town hall meetings. People really have an opportunity to understand what make up these arrangements.”

Researching a new alternative to ship oil out of province, the Alberta Party has a potentially big idea that would help the oil and gas industry.

“We are pro-pipeline but don’t stop there. We also have researched another possibility, but it is not completely researched. It is building a railway line from Fort Mac all the way out to a port in Alaska, bypassing BC and allowing 1 million barrels to flow that way. Part of it is having an adult conversation and saying ‘look, there is a problem and Alberta has been penalized on many fronts so let’s fix the problem’,” said Douglass.

With the UCP government promising to not only scrap the carbon tax but also fight a federal carbon tax, Donovan expressed hesitance to that method as he thinks a collaborative approach would be more beneficial.

“One of the parties is talking about taking the federal government to court right away if they got in. As a taxpayer, that worries me because I pay for both lawyers on that. If I’m paying for the provincial and federal lawyer, it is a losing battle. We need to work together on consensus to get our pipelines in.”

While collaboration and working together was discussed amongst many of the parties, the UCP see the time for playing nice being over as Schow explained Albertans have been on the wrong end of things for the past few years.

“I’m all for consensus and it would be nice if we could all work together to get something done. There was no consensus when the prime minister renewed the equalization formula by himself and the premier did nothing to fight back. That got us no pipelines, in fact, two were killed and two are on hold indefinitely. We are the party that will take the government to court and I don’t believe Justin Trudeau has Alberta’s best interest in mind. Actions speak louder than words. We will hold a referendum right here in Alberta on equalization. The purpose of equalization was to make sure everyone can provide healthcare and education for their families but there is nothing equal about what is going on right now. We are being taken advantage of.”

A question from the audience was around the UCP’s desire to sell crown land.

“We have talked about ways of balancing our budget and generate revenue. That is an avenue we have explored but I have also heard from stakeholders in this constituency and across the province. That is the plan moving forward, to consult and to ensure we are finding the most effective ways in this province to balance the budget which is way out of whack and to also make sure we bring investment back. We are going to consult the grazing leaseholders and the agriculture industry to make sure we get this right before moving forward,” stated Schow.

While revenue was needed, Smith was hesitant to fully commit to any selling of lands before talking with constituents.

“Personally, I have not been privy to a lot of the detailed discussions about selling off the crown lands. On a personal note, because there are folks that have lived there for a long time and the fact these are their livelihoods, I think anytime there is a big change that is going to take place, it really needs to be looked at seriously. Certainly, there is some need for revenue, there is a need for potential changes in the area but it is just the matter of sitting down and having a candid conversation about how to move forward.”

The Alberta Party meanwhile has already addressed this in some of their policy.

“One sentence — any sales of crown land for agricultural use will be subjected to careful consultation with the agricultural industry, First Nations community and other stakeholders,” explained Douglass.

Already having brought up the issue, Donovan once again expressed his concern with the potential UCP policy.

“For me, it is one of the biggest things that concerns me in this riding, there is a lot of Crown-leased lands. The people that are using it are stewards of the land, let’s be honest, no one knows how to graze that land better or farm it if it has a pivot on it. What scared me when I saw the UCP policy on it, they were going to sell 100,000 acres in Mackenzie County and it could be forestry, I’m not sure. At the bottom, it said there are 100,000,000 acres in Alberta that is crown land that could also be used as revenue. That is not achievable for farmers to give up one-quarter of their three quarters to buy that. We are going to fold all of the small towns in a heartbeat. If they put that up for sale, we are going to have all of our large producers come in and buy it. We will say goodbye to the Hays School, the Hays store, the Vauxhall schools and people will not be able to run that.”