M.D. gets look at grading levels 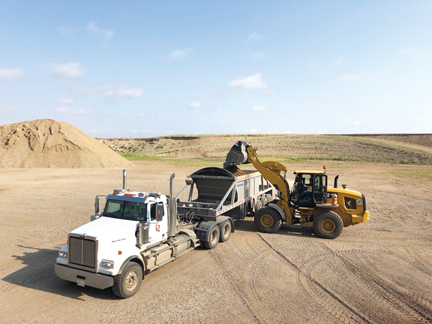 An extensive document on grading and gravelling level of service in the Municipal District of Taber has been presented to council.

The 20-page document extensively covers the current level of service provided to residents and businesses throughout the M.D. of Taber and gives council a good insight into what maintenance is being done their roadways throughout the municipality.

“What we’ve prepared is a current grading and gravelling level of service document for council information. What it includes is a lot of analysis of what our current operations are in the field as well as costs to those services provided,” explained Craig Pittman, director of infrastructure at the M.D.’s regular meeting on April 9.

One of the biggest changes made for the new document was around additional road classifications.

Classification one roadways have the highest traffic volume, are most important for economic and social activity and have thorough connectivity.

Grading frequency is set for every two weeks and gravelling once a year.

Classification two has high traffic volume with thorough connectivity with grading every three weeks and gravelling every two years.

Classification three has moderate volume, some connectivity and would be graded every six weeks and gravelled every five years.

Classification four is low volume traffic with limited roadway connectivity and would be graded every 18 weeks and gravelled every eight years.

Classification five roadways are unmaintained road allowances and would not be graded or gravelled by the M.D of Taber.

“So every 18 weeks, what that amounts to is two cycles per year. We have assumed a 36-week window for grading and gravelling cycles,” added Pittman.

“Whichever classification we go to, we are using the data we have for traffic volumes as well as operator feedback on which roadways are busy and which aren’t,” stated Pittman.

One of the concerns from council brought forward was around explaining to residents why their road was a certain classification.

“Obviously, the danger is everyone is going to want a class one road. So how do we justify here is the criteria that it needs to meet?” asked Coun. Brian Brewin.

It was explained that traffic counts were one of the main pieces of data used in order to classify each roadway in the M.D of Taber.

“A class one is going to be in the ballpark of a couple of hundred vehicles daily and trickle down from there. But that would be your base number. We don’t have a full data set to be able to do that,” said Pittman. “A part of the process is public consultation and the public is all going to want a classification one roadway. From administration, we provide a cost detail of what it would cost to provide that level of service.”

A question was raised about the possibility of another traffic count and if that would be a viable option moving forward.

“The more data we can collect, the better off we are on having defensible answers but two traffic counts at over 1,500 miles at a week per mile, per count, it becomes a very drawn out process. By the time you cycle back around, is your data still valid?” asked Pittman.

“To me, I feel I could defend it because we know what our baseline is,” added Deputy Reeve Tamara Miyanaga.

Council also questioned how involved the ag service board was with weed control on the roads that are both serviced frequently and those that were not.

“We do work with the ag service board on highway shoulders to minimize that vegetation,” answered Pittman, who also touched on maintenance for intersections. “Targeted intersection areas that have historically required additional maintenance are stabilized using contract resources to apply MG30 to the roadway surface. This treatment significantly reduces the development of wash boarding in these acceleration and deceleration areas.”

A variety of equipment is used for primary gravel road maintenance including one gravel crusher and ancillary equipment, five highway tractors with a tridem belly dump trailer, one highway tractor with a super B trailer and 12 motor graders.

Another portion of the in-depth document was around risk factor around gravel roads in regard to amount of grading and gravelling done.

“Things that are considered are operational impacts, environment safety, travel times, accessibility, service delivery, staffing, reputation and financials,” added Pittman. “All of those are considered which leaves us at a very small 51.6 risk score, once everything is considered. I don’t feel that is a huge risk and it probably is where the M.D. would want it. You could grade every road every day and gravel them twice a year to minimize that risk but that is not reasonable.”

A motion was made to accept the document as information and was carried unanimously by council.

Coun. Leavitt Howg was absent from the meeting.