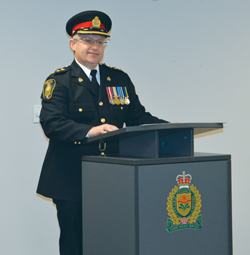 April 28, 1999 will forever be etched in stone as a day that helped shape the current form of the Taber Police Service.

It has been 20 years since a then 14-year-old former student walked into W.R. Myers High School with a .22 calibre semi-automatic rifle and fired at three students randomly in the hallway, killing 17-year-old Jason Lang and seriously injuring Shane Christmas. The shooter had previously dropped out of school and according to court documents, had suffered severe bullying throughout his school years, including having been doused with lighter fluid and threatened to be set alight when he was in the first grade, showing signs of depression throughout his childhood.

“The impact on us as a police agency was significant, but the impact on the victims of this matter are life long. The impact cannot be minimized. There were many victims other than unfortunately the deceased and other victims that were directly involved,” said Graham Abela, chief of the Taber Police Service, who was a constable at the time of the shooting. “There were vicarious victims and people who were impacted that were present that will have lifelong memories and impacts as a result of that day, and the police are them, too.”

Constables Rob MacGregor and Sgt. Howard Kehler were the first officers on the scene of a tragedy that would shake the small town to its core and become a topic of international attention, occurring shortly after the Columbine High School shooting which happened eight days earlier in Colorado. It was the first fatal high-school shooting in Canada since the Brampton Centennial Secondary School shooting, 24 years earlier.

“It was almost an army of officers at the end of the day which assisted in the investigation. From a police service perspective, the crime that had occurred, changed our organization for the better and it drew attention to the fact that this community had to invest in its police service and it did so,” said Abela. “And as a result, you have what you have today. It was a different police agency that went to that crime, then the police agency a year later. I think about that horrible day and then I think about the positives that emerged from that horrible day.”

The Jason Lang Scholarship was created in memory of Jason Lang to reward academic achievement of post-secondary students in Alberta and is managed by Alberta Scholarship Programs. Jason’s father Dale, who did tours of spiritual guidance and forgiveness as a pastor, helped create The Solid Rock Youth and Family Foundation which existed in Taber for many years as part of social service ministry and a safe place for youth to congregate at with several youth activities available. Taber Police Service protocol would forever change as well.

“I lecture quite often at the University of Calgary at the Faculty of Education where I’ve got to talk over the years, thousands of students and I always talk about the school shooting that happened at W.R. Myers. The first thing I ask students is ‘how many of you here are the recipients of the Jason Lang Memorial Scholarship?” said Abela.

At times, about a quarter to a half of the room raise their hands and they would be asked why the scholarship exists. Some classes, no one raised their hands, while in others, only a couple would.

“I’d go into the story of what happened and I talk about the grace of Rev. Lang, the initiatives that came out of the terrible event, such as the development of the violence in school threat assessment model,” said Abela. “There is the development of hub models with multiple agencies within the community coming together to do threat assessment in relation to trying to ensure school safety. There is the research that has been done that I’m involved with, in violence in schools. There is work that has been done around crime prevention through environmental design of schools and construction to try and prevent future incidents.”

School teacher at the time, Cheyno Finnie, managed to wrestle the shooter down to the floor during the incident, and Smith was arrested without further incident by a Taber constable who was also serving as the school’s resource officer at the time, a position whose importance has been magnified since the shooting 20 years ago.

“I’ve also had the opportunity of going across Canada and on several occasions, speaking on the lessons learned from the incident. In combination with the officers from Virginia Tech (where a school shooting happened in 2007 at Virginia Polytechnic Institute and State University which killed 32 and wounded 23), on two occasions we shared a small rural experience and then listen to their large city, urban university experience,” said Abela. “We talked about ways police response can create better outcomes in violence that occurs in schools.”

Abela added he still thinks about the school shooting constantly. As the primary investigator of the file, Abela admitted for many weeks after the incident, it was 16-hour days the Taber Police Service members worked.

“We worked night and day putting together that file to put the case forth that created the successful prosecution,” said Abela. “There was a tremendous amount of pressure. I can remember working all day and into the wee hours of the night that first day, getting home at 3 a.m. and knowing I’d have to be back up again at seven or eight. I got a phone call at four in the morning on my unlisted phone number from the BBC in England. How did they get my number first of all? And it never stopped. It was pressure, pressure, pressure.”

There were nine police officers designated to the case at the time, with an acting sergeant that was appointed acting chief.

“We had some great assistance from the RCMP and major crimes unit. We are not homicide investigators. Although we have that training, we know our limits and we know when to call in for help and we did,” said Abela. “They didn’t really take it over, but overwatched what we did to see if we were on the right track.”

April 28, 1999 was the realization that a school shooting can happen in a small rural town like Taber, in which organizational priorities were re-focused.

“You better have an organization that can at least deal with it. You don’t have to be everything to everyone, but be able to deal with it. We did that day, but it was a real wake up call,” said Abela. “That was when chief (Terry) Dreaddy was hired and in my view, Terry brought the organization to the next level, through the support of council and the community.”

“That was a change that was not occurring previously. That was a real positive with that model which we still use today in different ways,” said Abela. “We have to realize, from my perspective anyway, violence has always been in the community, violence will always be in the community, but the ways in which we mitigate risk I think have changed since we have become more aware of how violence in communities occurs. What are the social determinants of violence? What are the ways in which to identify those who may become violent? We need to be careful not to swing the pendulum too far the other way.”

“Schools have to be welcoming and a warm place. The school in my view is the place in which much of the work we do as a police agency occurs. Teachers are going to be a parent when parents aren’t there. They are going to be a social worker when the social worker isn’t there. You are going to be a nurse when the nurse isn’t there. Beyond curriculum development, you are dealing with issues of hunger, of hygiene, of drug and alcohol addiction,” said Abela. “The craft of teaching is your forte in what you will be doing during your day, but the school is a place where many different things happen, and how we respond to that as a community and as a police service is very important. The school is the hub. A healthy school means a healthy community. Healthy kids in a healthy school is a healthy community. So the more we can contribute to those types of initiatives, the more public safety is promoted in the community which is my job. The craft of policing as changed and we have had to adapt and improvise and meet those challenges. For me, the events of April 28, 1999 solidified that for me.”