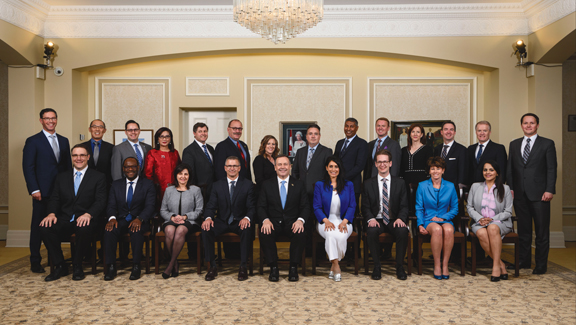 Premier Jason Kenney and Cabinet are sworn in at Government House, in Edmonton on Tuesday, April 30, 2019. (Photo by Alberta Government)

Riding the wake of a landslide UCP electoral victory in April, Taber-Warner MLA Grant Hunter has been elevated to the cabinet and will be taking on the role of Associate Minister of Red Tape Reduction.

“I’m deeply honoured to be be able to be involved with the cabinet, Jason Kenney and the rest of the ministries,” said Hunter. “I’ve been working on the red tape reduction file for three-and-a- half years. I’m grateful I can actually start working on those ideas, looking at other jurisdictions for best practices, and then bringing them here.”

“I have to say I’m very impressed,” said Hunter. “I don’t know some of them really well, but the people I’ve gotten to know are some the sharpest minds in Alberta, who have a deep passion for being able to be what the proper role of government is, and that’s to help Albertans get back to work. I see that dedication and that commitment to that end from every one of my colleagues. That’s what I think is going to help us be successful, is that they are hyper-focused on making sure that Albertans get back to work, and get our economy booming again. I see that everywhere from Children’s Services to Finance.”

Careful consideration and analysis of policies and procedures will be integral to the new position before any regulatory burden will see the glint of the axe.

“The main goal is to reduce regulatory burden by one third,” said Hunter. “Whatever the regulatory burden is, we’re going to take account first, and then once that account is done, we’ll have a baseline. A lot of this stuff is based on the model that they have in B.C. B.C. was successful in that they were able to reduce regulatory burden by 49 per cent in 10 years. So they have had the gold standard when it comes to a red tape reduction strategy. Most places in the world have a red tape reduction strategy, or something that they’re doing to address these issues.”

The trials and tribulations of other jurisdictions will be examined to see if there is anything that Alberta can learn to help streamline the efficiency of government.

Hunter explained the difference between a “minister” and an “associate minister” as it pertains to his duties and activities in cabinet.

The Red Tape Ministry could be temporary, says Hunter, but he doesn’t rule out the possibility of it continuing on in spirit — or in practice — beyond 2023.

“I don’t know if red tape reduction is going to be a ministry anytime after four years. We might be able to create that space within the other ministries, and create that culture, so that we don’t need to have this anymore. So working myself out of job is kind of the strategy that we’re looking at here. However, there may be a lot of work that still has to be done afterwards. B.C. still actually has a red tape reduction ministry.”

It has been almost three decades since the constituency’s elected representative had a chair extended at the provincial cabinet table, when Taber-Warner MLA Bob Bogle (PC) last served as Minister of Utilities and Telecommunications in the mid-1980s.

Before that, Taber-Warner MLA Leonard Halmrast (Social Credit) served as Minister of Public Welfare in 1953 and later Minister of Agriculture in 1954. Later Bogle, who served as Taber-Warner MLA from 1975 to 1993, was appointed as Minister without portfolio responsible for Native Affairs in 1975, Minister of Social Services and Community Health in 1982, the aforementioned Minister of Utilities and Telecommunications in 1986, and finally as caucus chairman and whip prior to his retirement in 1993.

Also appointed as a member of the Treasury Board, Hunter is now ready to begin polishing the cabinet table with his colleagues as they prepare to roll up their sleeves to implement the UCP’s platform.