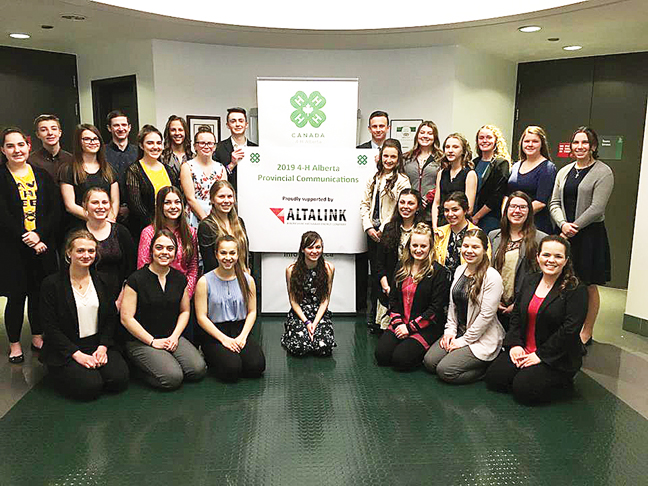 4-H has helped change Jessie Ferguson’s life for the better, as her public speaking skill has earned her provincial acclaim.

Ferguson has been in 4-H now for seven years, starting her journey when she was in Grade 4, where simply getting out of her comfort shell was the goal, let alone earning a provincial public-speaking title through 4-H.

“When I was in Grade 4, I was one of the most shy kids you would ever meet. I honestly couldn’t even talk to anybody. Today, I probably wouldn’t even be able to talk to you on the phone if it weren’t for 4-H,” said Ferguson in an interview with The Advance last week. “Throughout my 4-H, I’ve always done presentations and I’ve seemed to succeed. It’s all due to public speaking and having to partake in meetings in 4-H. You have to be involved in 4-H and it gives you real-life situations that takes you out of your comfort zone.”

Competing in the senior category for presentations, Jessie’s choice of ‘Mind Your Melon’ as a topic resonated with judges right down the line from her local Retlaw Prairie 4-H Beef Club, to regionals at Lethbridge College, all the way to a gold-medal win at provincials in Wetaskawin last month.

Ferguson took her public speaking responsibilities very seriously, having decided on her topic around the Christmas break.

“That way I am prepared and I know my presentation well enough that I felt confident at my club competition,” said Ferguson, adding once she started advancing to higher levels at districts/regionals, she ramped up to daily practising of her presentation, and she ditched the cue cards. “By then, I should know my presentation to the dot, and each word I plan to say. This was the first year I was able to go to the provincial level.”

As much confidence as 4-H has given to Ferguson, she sheepishly admits she felt some butterflies when she arrived for the provincial competition in Wetaskawin in April, seeing the tools her competition had for their presentation.

“It was an amazing experience. I didn’t know what it would entail. When I first got there, I was unbelievably nervous. Every other presenter there had a computerized power point,” said Ferguson, adding she was the only one to go ‘old school’ in her offering. “I was the only one with an actual poster fold out board. That was nerve racking, I didn’t honestly think I’d be able to place with that type of competition. I usually have a pretty good sense of whether I presented well.”

The judges obviously enjoyed the retro feel where the strength of Ferguson’s presentation connected with the panel, giving the Retlaw 4-H club member the first-place, gold-medal finish.

As a 16-year-old, it was her first year as a senior category, going up against much more seasoned speakers. As part of her ‘Mind Your Melon’ presentation, Ferguson was required to answer an impromptu question.

With her presentation focusing on the importance of head safety/helmets, the judges asked the Vauxhall-area resident how she would promote helmets among the riding community.
“I said it’s all about the education presence. When people see others wearing helmets, it encourages them to wear theirs. Some people are nervous, or are embarrassed to wear helmets,” said Ferguson.

Jessie started on the high school rodeo circuit this past fall, competing in barrel racing, pole bending, breakaway roping, horse jumping and goat tying. Ferguson added she is the only girl in the whole District 1 rodeo (southern Alberta) that wears a helmet.

“I get a lot of questions of why I wear my helmet. I’m a competent rider, but it’s seen as abnormal to wear I helmet. I thought it’d be a good idea to educate on the importance of a helmet. Once I started looking into my topic, I didn’t realize the repercussions you can have if you don’t wear your helmet,” said Ferguson, adding the importance of a helmet transcends not just rodeo, but any high impact sport where collisions or falls can be prevalent. “I tried to incorporate in my presentation the 4-H motto which includes head, heart, hands and health. I figure your head (and health) are an important part of your 4-H experience and helmets are a good way of representing that.”

While Ferguson may be in the minority in wearing a helmet on the rodeo circuit, she is not alone. In her presentation, she highlighted the inspiration of Fallon Taylor who advocates for helmet safety as a barrel racer, despite the derision and stigma often associated with donning one during competition. Fallon qualified for her first National Finals Rodeo (NFR) at the age of 13, promptly encouraging the Women’s Professional Rodeo Association (WPRA) to pass a new rule that professional contestants needed to be 18 at the youngest. She lost interest in barrel racing in 1999, focusing on modeling and acting opportunities while training horses for 15 years.

In 2009, Taylor was loping a gelding one evening when the horse slipped. The horse started bucking and Taylor would eventually land on her head, fracturing her skull in four places, shattering bones on the right side of her face along with her eye socket and fracturing her C-2 vertebra. Doctors predicted only a two percent chance that she would walk again. Taylor made it her only goal to recover from her injuries. She recovered enough to walk again after one and a half years. After that, she made her next goal to ride again.

The inspirational story concluded with her returning to competitive rodeo, where she would eventually be World Barrel Racing Champion in 2014, with fashionable clothing and helmets as a trademark in her riding. Taylor was nearing a million dollars in career rodeo earnings as of 2016 apart from a Ranch Dress’n rodeo apparel line featuring jeans, T-shirts and saddle assessories. Taylor’s social media following is one of the largest in rodeo, at about one-half million, whom she calls Flomies.

“She’s definitely a role model of mine, she’s an inspiration,” said Ferguson.

Ferguson is hoping her 4-H skills will also help translate to a successful run for the title of Rodeo Queen with the Alberta High School Rodeo Association.

The competition features being judged on the components of horsemanship skills, public speaking skills, an interview, modeling/appearance and a test on rodeo rules. The judging takes place at the provincial finals rodeo in Ponoka from May 30 – June 2.

“If you advance on from the provincial finals rodeo, you have to win queen in order to advance to national rodeo queen competition which is held in July in Wyoming,” said Ferguson. “At nationals you are going up against approximately 48 girls. You compete against the provinces (Canada) and the States.”

While Ferguson awaits her rodeo queen competition, she is still enjoying the afterglow of her provincial 4-H top finish, and offers up some advice she had passed down to her earlier for present and future 4-Hers.

“People always tell you to be yourself when you are speaking and chose a good topic that relates to you,” said Ferguson. “I didn’t really believe that at the start, but through the years, I’ve discovered and decided that works much better. If you are passionate about the topic, it’s much easier to talk about. Find your topic, do your research and incorporate some humour. When you combine all those aspects together, you make a great presentation.”