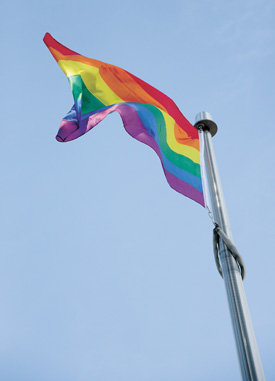 The Pride flag will be flying once again at the Provincial Building in Taber, but not before further controversy has swirled around the decision.

Petitions both supporting and wanting the flag banned from being flown at the local Provincial Building during Taber Pride celebrations on June 1 started up on the website Change.org.

While the petition does not seem to be present on the website as of Monday, early last week a petition initiated by someone identified as ‘Alberta Citizen’ asked Taber-Warner UCP MLA Grant Hunter to disallow the raising of the Pride flag at the Provincial Building, and had broken the 1,000 signature barrier at its peak.

‘Alberta Citizen’ appears to be local, given the petition was initiated after the individual responsible was informed of the Taber Pride celebrations by the town’s monthly news letter. A social media inquiry by Times editor Greg Price did not receive any response from those who have signed Alberta Citizen’s petition.

Only those signatories who left comments could be identified, with justification being primarily religious, citing various Christian biblical passages including “We are not against the LGBT people, but we do feel it is necessary to speak up against their sin. We all sin and grieve our Creator daily. We all need the saving work of Jesus Christ. Please let’s not celebrate sin whatever it may be.”

It also claimed that the rainbow and its colours which are used in the Pride flag are actually a symbol of “covenant faithfulness,” and that “Christians are deeply grieved and hurt that a biblical symbol is used to represent non-biblical actions.”

The Taber Equality Alliance issued a press release shortly after hearing of the petition, stating ‘We are deeply saddened by this. As Pride planning is moving into its final stages, we do not wish for this controversy. We have reported the petition to the site as hate speech and asked that they remove it. We do not wish to pursue it any further as it will overshadow our event. Pride is a peaceful protest and this petition is another reason why what we are doing is important.”

Days later in response, a second Change.org petition was started by Mickey James Wilson from Ryley, Alta. to ‘Support the Pride flag raising at the provincial building in Taber, Alberta.’ Dozens upon dozens of people have left their messages after signing, with the petition at 1,024 signees as of Monday morning.

Jillian Maxine is a member at large with the Taber Equality Alliance as an ally, talked about on the spirit of the counter petition, having spoken with Wilson via Messenger last week.

“Speaking as a citizen of Taber, being a member of the Taber Equality Alliance who works with patients under the queer umbrella, it is always really shocking when I hear the kind of religion-based fear that the first petition sounded like. First, it’s about a lot more than your sexual orientation, and not everyone has the same beliefs as you, but everyone has the same rights as you do,” said Maxine, who signed the counter petition by Wilson and has been selected as the honourary person to raise the Pride flag in Lethbridge at its celebration later in June.

“There are many different ways people can be privileged or disadvantaged in our community. Reading through the first petition (commentators), there are some people who might be in a demographic (Low-German speaking Mennonites), who do not always get a fair deal around Taber. Any time religion is used as a way to paint us all under the same brush and not say ‘my religion says this is what I can and cannot do’ but my religion says ‘this is what you should not be allowed to do’… that’s a real problem for a person like me in the community.”

“We all move and believe different things, but we should all be able to exercise rights freely. Yes, you can believe what you like, you can write a petition if you like, but the minute those beliefs make you talk down to or try and suppress other people, you have to question the true leader. Who are you really following?”

Maxine does not identify herself as Christian, but grew up learning from Christian traditions.

“I think the primary message is supposed to be about love and looking after each other. And not about singling people out and making people do what you think they should do. That sounds more like slavery and control to me,” said Maxine. “You are free to believe what you believe, but I also think you have to take a step back and look at your actions. If what I’m doing is hurting another person, that’s not the right thing to do, it doesn’t matter where that belief system comes from. If what you are doing is loving and lifting the other person, that has to be OK. The world is watching, our kids are watching and it hurts my heart knowing people are saying these things.”

Whether one likes it or not, Maxine added there will be someone in a family tree, community or church that comes out as gay, or has left the community because leaders have not shown a welcoming attitude to those in the LGBTQ+ spectrum.

“They see what people are saying and they are part of our community too. Pride is more than a celebration, it’s not the same as Canada Day. Even though I would love for it to be just a great, fun family party, it is also about people who are still living oppressed lives, here and now in 2019 in their homes, at their workplaces, in their healthcare settings and their schools,” said Maxine. “That is not the world we think we should be in. We can do a lot better, and Pride showcases that.”

Numerous studies have shown attempted suicide rates, levels of depression and illegal drug use are much higher in LGBTQ+ youths “who experience high levels of rejection from their families during adolescence (when compared with those young people who experienced little or no rejection from parents and caregivers)”, bullying at school and non-acceptance in the community.

“People are like ‘what could we have done? This poor child.’ Well, this (Pride Day) is something we can do. There are people working very hard to bring Pride to Taber for the third time,” said Maxine. “This is one of those movements in the community that can bring us all together and build bridges. It can help reduce the risks to our most vulnerable kids.”

Controversy has involved the Pride flag all three years it has been featured in Taber.

Town council barely passed allowing it to fly at Confederation Park in 2017 by a 4-3 vote, after defeating a motion to have it fly in front of the municipal office.
The flag would later be stolen and then burned after it was raised the second time. The flag was raised a third time with people volunteering to camp out at the flag site to ensure its safety.

The fallout from the incident had the town rescind its flag protocol policy in January 2018, in which administration noted before the decision, ‘following the double vandalism of the Pride flag in 2017, considerations as to the safety and security of property and people must be taken into consideration.’

The previous flag policy and its respective procedure were built on a number of existing flag policies from across Canada, and encompassed the flag protocols from the federal and provincial governments.

Under the previous policy, requests for guest flags to be flown on the Community Flag Pole were subject to the sole discretion of council for approval. The decision was made in 2018 to fly only the Canadian, Albertan or Town of Taber flags on town-owned poles.

However, former NDP Infrastructure Minister Sandra Jansen invited the group to fly the Pride flag at the Provincial Building, after the Taber Equality Alliance requested the same thing for 2019’s Pride Event with the new United Conservative Party provincial government. On Friday, in a written statement, the provincial Infrastructure Ministry said it will be permitting the Taber Equality Alliance to raise the Pride flag for one week at the Provincial Building.

How much either petition weighed in on the decision is open for debate.

The fact some people were not using their real identities in signing the petition and the ability to have the same person signing a Change.org petition numerous times using different emails, brings into question the validity of overall numbers of signees of either online petition.

On Friday, Taber-Warner MLA Grant Hunter — to which the opposing petitions were both addressed — deferred any decision or statement on the matter to his cabinet colleague, Infrastructure Minister Prasad Panda.

“That’s really an Infrastructure Ministry question,” said Hunter, who did confirm that it was his understanding TEA’s flag raising would be going forward as planned. “That’s what I’ve been told as well, for June 1. Infrastructure is doing their job. We’re absolutely focused on what Albertans hired us for, to get jobs back in Alberta, and stimulate the economy. And we’re going to be razor-focused on those things, and everybody has a part to play. And Infrastructure is playing their part — I’m not going to get involved in what they need to do.”

Hunter confirmed he will not be attending this year’s third annual Pride Day on Saturday, June 1 which runs from 1-6 p.m. at the Provincial Building and Confederation Park, citing a previous engagement that day according to the Taber Equality Alliance.

MLA Hunter has not attended any of the three Pride events in Taber and last year’s celebrations featured out-of-riding politicians outnumbering local ones in attendance for the flag raising.

Shannon Phillips, then minister of Parks and Recreation, former Calgary-Hawkwood MLA Michael Connolly, and Alberta Liberal Party leader David Khan were among those in attendance.

Carly Firth, the lone Taber town councillor who voted in favour of having the Pride flag fly at Confederation Park in 2018, was also in attendance.