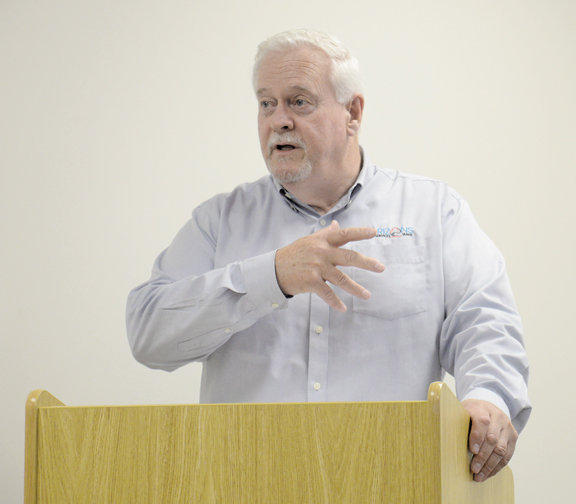 HIGHLIGHTED: Alf Rudd, program manager of Horizons Victim Services Unit makes a presentation on how the units all across the province came to be. ADVANCE PHOTO BY GREG PRICE

Exactly how far reaching the Horizons Victim Services Unit in the Taber/Vauxhall area is, was showcased at a presentation at the Taber Public Library during Victims of Crime and Survivors Week.

“The work that you see going on with the court support, the on-scene attendants, at peoples homes, at accident scenes and crime scenes, to be lawfully placed there as a Victim Services volunteer is quite the process and is founded in law,” said Alf Rudd, program manager for Horizons Victim Services.

In Alberta there is the Victims of Crime Act which has been in existence for over 20 years. It has provided the legal framework to give the ability for people to volunteer in supporting the police.

“There are 76 victim units in the province of Alberta and we are one of them. There is not a square kilometre of Alberta that does not have services provided to them. The police are everywhere, that means we are everywhere. That goes from north, south, east, west and it’s very well organized,” said Rudd.

Under the Victims of Crime Act, it established the ability to have a fund set up from infraction tickets.

“When you get those nasty tickets from the police for speeding or whatever, or you find yourself in handcuffs in front of the judge and they administer a fine, there is a portion of that, it’s called a victim surcharge that goes to the fund,” said Rudd. “Traffic fines used to be like $35 bucks or more like $535 like they are now. But they started ending in weird numbers like $137.50. Fifteen per cent (added on) goes into the fund and held by the government in an account. It’s not tax dollars in a manner of speaking, it’s more how you feel about paying fines. It’s money collected through the court system. We are grateful that it is a healthy amount and it is sustainable.”

The board applies for the grant money that is in the fund to be able to pay for services which the victim services unit provides. The Taber area has a maximum budget of $150,000 annually that is allowed. Big cities like Calgary and Edmonton are capped at $600,000. Places like Medicine Hat and Lethbridge are capped at $300,000 annually. Currently, the fund sits at a $71 million surplus.

“There are laws and policies in place about how services are to be used by the police. Judges are often asking about victim services. Victims have had an opportunity to express themselves because the Victims of Crime Act also opened up the door for the ability of crime victims to address the court,” said Rudd. “There are victim-impact statements, and a victim of crimes assistance dollars available. Some victims of crime are severely wounded, have severe disabilities or lose a spouse.”

Some of the principles the Victims of Crime Act are built on include: Victims should be treated with courtesy, compassion and respect. Privacy is important and paramount. All reasonable measures should be taken to minimize inconvenience to victims. Victims should promptly receive financial benefits for injuries they have suffered. Security and safety of victims should be considered at all stages of the justice process. Information should be provided to victims about the criminal justice system and the victim’s role and opportunity to participate in the justice processes. Appropriate measures to protect victims from intimidation and retaliation should be taken when necessary.

“It is very unnerving to be a crime victim, especially when your perpetrator is still out there and not in jail where you think they should belong,” said Rudd. “It’s unnerving to have someone who committed a crime against you still free. We work with people to establish safety plans and make sure there are protocols in place are in place for quick police response in case something happens. It’s serious business.”

Rudd stresses that victims of crime report it and co-operate with the police service.

“None of what Victim Services does can happen if that doesn’t happen. We run into situations where the crime victim doesn’t co-operate with the police. A person like that would not be able to take advantage of the full range of services that the Victims of Crime Act provides.”